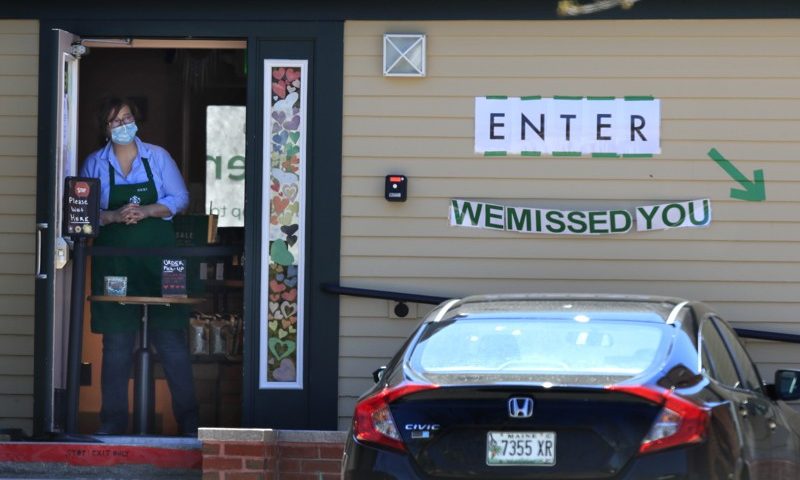 The global immobilization is raking the entire travel industry.

The outbreak of the coronavirus has dealt a shock to the global economy with unprecedented speed. Following are developments Wednesday related to national and global response, the work place and the spread of the virus.

TRAVEL & LEISURE: Boeing said this week that it’s gone another month without a single airplane order, cruise ships are devoid of passengers and gasoline prices are plunging because few people are commuting to work or taking road trips. Global travel is close to a standstill.

— One of the biggest tourism companies in the world is cutting 8,000 jobs and will try to slash spending by about 30%. TUI CEO Fritz Joussen said Wednesday that a partial resumption of business could begin by June or early July in areas where testing is taking place or in regions that have been cleared by governments.

— Six Flags is launching a reservation system to avert overcrowding at theme parks. Advanced reservations through the company’s website will be required to enter all parks. People can get on a waiting list if the park is at capacity. Members of loyalty clubs and season ticket holders get priority.

— U.S. hotel occupancy is continuing to improve after sinking to historic lows in April. For the week ending May 9, the average occupancy rate at U.S. hotels was 30%. That’s down 56% from a year ago, but still better than the 21% occupancy level hotels were reporting the first week in April, according to STR, a data and consulting firm.

— Middle East carrier Emirates said Wednesday that it will resume flights on May 21 between Dubai and Chicago, London, Frankfurt, Paris, Milan, Madrid, Toronto, Sydney and Melbourne. Monday was the busiest day at U.S. airports since March 25, but U.S. air travel remains down more than 90% from a year ago.

HOUSING: There are mixed messages on the housing front. Activity has fallen sharply with fewer people willing to show their homes, or to look at them. And 33 million people have lost jobs in the pandemic. Mortgage payments are being skipped.

— For the fourth consecutive week, mortgage applications rose, suggesting that the spring buying season may not be a complete loss. And applications to buy a home jumped by a healthy 11% last week, according to the Mortgage Bankers Association.

Those applications are still down sharply from last year, but the gap between 2020 and 2019 appear to be shrinking. Purchase volume annually fell 19% annually. Last month, it was down 35%.

TROUBLED WATERS: Global commerce has seized up in the pandemic, skewing trade numbers and emptying ports.

— The world’s biggest shipping company expects a quarter of its typical annual volume will be lost this year.

Denmark’s A.P. Moller-Maersk said Wednesday that its outlook for the year contains “high uncertainties.” The shipper had expected growth between 1% and 3% before the outbreak.

MARKETS: Wall Street is falling in another erratic day of trading Wednesday, weighed down by worries about a slow recovery for the economy.

WE’VE GOT THE MEATS: Shelter-in-place has vastly distorted consumer behavior when it comes to the refrigerator, the pantry and notably, the liquor cabinet.

OUT: Respiratory medicines, yogurt and chocolate.

Pharmacy shelves were cleared out at the outset of the pandemic, but panic buying appears to have abated, NCSolutions found. Sales of respiratory medicines was one of the few items in retreat, falling 11% from last month, and 7% from last year. Yogurt sales fell and, perhaps also due to the waning of panic buying, chocolate sales fell 2%.

BONUS PAY: Kroger’s $2 an hour bonus pay for its grocery store workers is set to end this weekend. Kroger and other retailers began to temporarily boost pay at the end of March as an incentive to get employees to work as the coronavirus spread.

Retail jobs are risky, possibly exposing workers to the virus from customers or coworkers inside stores or warehouses. At Amazon and Target, the $2 hourly bonus pay is scheduled to end at the of May. Walmart said it will pay workers another cash bonus of up to $300 in June.

UK on Course for ‘Significant’ Recession After March Slump

US Meat Exports Surge as Industry Struggles to Meet Demand