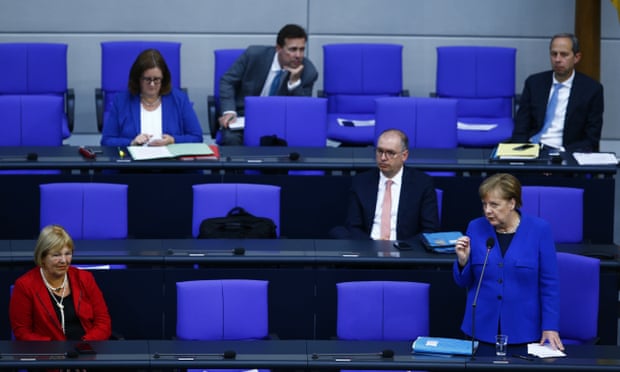 Angela Merkel has said Russian hacking attacks on the Bundestag in which her emails were seized harmed efforts to build a trusting relationship with Moscow.

Merkel told the German parliament on Wednesday that she had been pained to learn of the 2015 hack and the perpetrator.

The news magazine Der Spiegel reported last week that an investigation by German intelligence authorities found that agents in Russia’s GRU military intelligence service carried out the attack. Moscow has denied all allegations that it has hacked foreign governments.

Merkel was responding to a question from Tabea Rößner, an MP with the opposition Green party, about her views on the outcome of the investigation. Merkel said she was pleased that investigators had found out who was responsible for the attack and were seeking to make arrests.

“I take it very seriously,” Merkel said. “I may very honestly say it pains me. On the one hand I make an effort on a daily basis to have a better relationship with Russia. But when you see on the other hand that there is hard evidence that Russian powers are behaving in that way, then of course it’s an area of tension … that remains inside me. That is unpleasant.”

Asked by Manuel Höferlin, of the pro-business Free Democrats, to clarify her use of the word unpleasant, which he said was inadequate, she answered: “Unpleasant is just one part of it, but I also find it outrageous as well. Of course it damages any sort of trusting collaboration.”

She said other parliamentary colleagues had also been affected by having their emails hacked in the attack, and would also find it outrageous.

She said what she called Russia’s hybrid warfare was “a strategy … which we need to keep an eye on and which we cannot suppress.”

It has always been suspected that the hack five years ago, which paralysed Germany’s parliament for several days, was used to acquire sensitive data that was later used in an attempt to destabilise the political system in the run-up to federal elections of 2017.

IT experts from the FBI and German intelligence authorities have gathered evidence showing that the attack was carried out by the hacker collective APT28, also known as Fancy Bear, working for the GRU. The same group is believed to have been behind the hack attack on the Democratic party in the run-up to the US presidential elections in 2016.

Specific focus for the attack is now on Dimitri Badin, an agent for the GRU who is believed to have led the spying operation. Germany’s general prosecutor has put out a warrant for his arrest.

Merkel said Germany would take the appropriate measures just as it had when sanctions were introduced against Russian diplomats following the murder last summer in Berlin’s Tiergarten park of a former Chechen insurgent, which Germany believes was a contract killing carried out on behalf of the Russian state.

EU Unveils Plans to Save Vacations and Avoid a Lost Summer