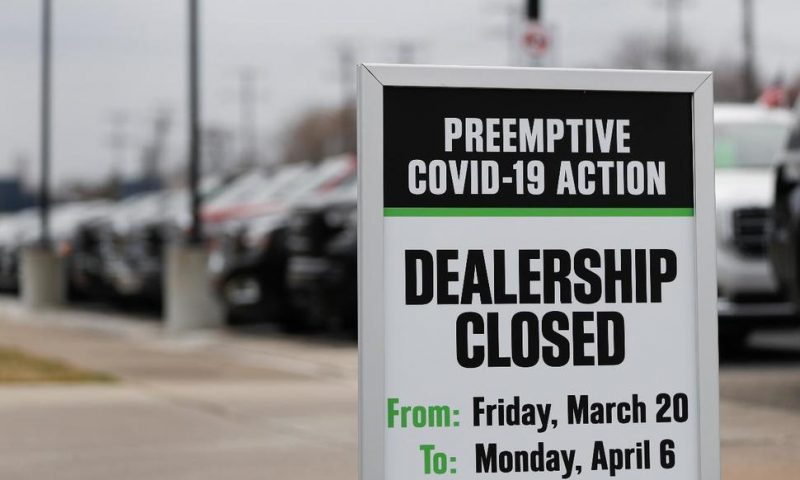 Ford, Fiat Chrysler, Honda and Toyota have taken steps to restart North American factories that have been closed to protect workers from the coronavirus.

DETROIT — Ford, Fiat Chrysler, Honda and Toyota took steps Thursday to restart North American factories that have been closed to protect workers from the coronavirus.

The plants would reopen in early or mid-April, restoring the largest source of cash for automakers that generally book revenue when they ship vehicles to dealerships.

Auto companies, like other businesses, are trying to manage their way through the coronavirus crisis, which has forced factories to close amid employee concerns that they could catch the virus while working close to others at factory work stations.

Ford said it wants to reopen five North American assembly plants, starting with one in Mexico on April 6 and continuing with four in the U.S. on April 14. The move was immediately met with skepticism by the United Auto Workers union, which represents 56,000 Ford factory workers.

“The UAW continues to review with great caution and concern decisions being made about restarting workplaces, especially at advanced dates,” union President Rory Gamble said in a statement.

Honda wants to reopen U.S. and Canadian factories on April 7, a week later than originally planned, while Toyota plans to restart North American plants on April 20. Fiat Chrysler intends to reopen U.S. and Canadian factories April 14 depending on state restrictions and plant readiness. General Motors says it hasn’t decided yet when factories would restart. Most automakers said they would monitor the virus and adjust decisions if needed.

The factory decisions contrast with Italy, which on Thursday expanded a nationwide lockdown to include most heavy industry. Auto plants in Italy, which leads the world in virus deaths, already had been closed voluntarily.

The automakers’ moves in the U.S. come as new auto sales are expected to fall dramatically for the month of March. Edmunds.com expects March sales to fall nearly 36% from a year earlier.

Ford, in a release before the markets opened Thursday, said it’s aiming to reopen its factory in Hermosillo, Mexico, followed by its Dearborn, Michigan, truck plant, Kentucky truck plant in Louisville, the Ohio Assembly Plant near Cleveland, and the Transit van line at the Kansas City plant. The company also wants to reopen some parts-making plants on the same day, including four in Michigan, which is among the states hardest hit by the virus.

The Dearborn, Michigan, automaker says it will introduce additional safety measures to protect workers, but said it would give details later. Ford wants to reopen five North American assembly plants in April that were closed due to the threat of coronavirus.

All three Detroit automakers suspended production at U.S. factories a week ago under pressure from the United Auto Workers union, which had concerns about worker safety.

The Ford decision comes as the number of people infected by the virus spikes in Michigan. On Wednesday the state reported at least 2,294 infections and that the number of deaths nearly doubled from 24 to 43.

Two Detroit-area hospital systems said they are caring for more than 1,000 COVID-19 patients at 13 hospitals. At Beaumont Health and Henry Ford Health System, operating rooms were being converted into intensive care units and clinics had been turned into rooms for patients needing other medical care.

President Donald Trump said Wednesday that he is hoping the United States will be reopened by Easter as he weighs how to relax nationwide social-distancing guidelines to put some workers back on the job during the coronavirus outbreak.

Dr. Amesh Adalja, an infectious disease specialist and senior scholar at the Center for Health Security at Johns Hopkins, said by April 14, experts will have a better idea what the trajectory is for new coronavirus cases and whether factories can be run with appropriate social distancing. It’s important, he said, to find was to operate factories safely. “I would say we have to think about what the path forward is going to be,” he said.

The decisions on whether to reopen factories should be based on local virus transmissions and infections, he said, adding that the number of people infected is going to rise because of additional testing that is now being done.

“If they’ve researched up enough on how long the virus lives on surfaces and things like that, and they’re doing their part to keep that at a minimum, I guess I’m not too inclined to worry,” he said.

Stevenson said other workers may be more apprehensive about the virus, but he says he keeps his distance to guard against the coronavirus.

The UAW’s Gamble, though, suggested that Ford keep worker safety at the top of its list before restarting operations.

“The only guideline in a boardroom should be management asking themselves, ‘Would I send my family — my own son or daughter — into that plant and be 100% certain they are safe?’” Gamble said.

The Ford Motor factories, which largely make highly profitable pickup trucks, commercial vans and big SUVs, are key to Ford’s financial health. The Ford F-150 pickup made at the Dearborn Truck plant is the top-selling vehicle in America that’s responsible for much of the company’s profit.

The Ford factories were to be closed until March 30. Combined, the Detroit automakers have about 150,000 unionized factory workers.

Two union workers from Fiat Chrysler plants in the Detroit area and Kokomo, Indiana, have died this week from complications due to the virus, but it’s not clear whether they got it at the factories or elsewhere.

For most people, the coronavirus causes mild or moderate symptoms, such as fever and cough that clear up in two to three weeks. For some, especially older adults and people with existing health problems, it can cause more severe illness, including pneumonia, or death.

The effort to reopen the plants comes as Amazon and other operators of large warehouses continue operations, although some of the goods they’re distributing are considered essential.