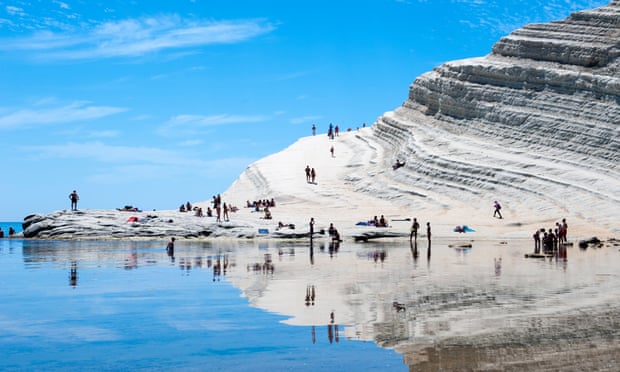 For years, the site of the Scala dei Turchi – meaning Turkish steps or stairs of the Turks – a candidate for Unesco heritage, has been in a state of degradation. It is subject to constant erosion and theft by visitors who detach pieces of marl, the white sedimentary rock that gives the steps their distinctive appearance.

On Thursday prosecutors from Agrigento in Sicily announced they were taking over the site, which will be temporarily closed and monitored by the judicial authorities.

“The Scala dei Turchi has immense historical, landscape and geological value,” wrote the chief prosecutor of Agrigento, Luigi Patronaggio, in a report. “But, unfortunately, there is a lack of protection for the site.”

“We have been denouncing the state of abandonment of the Scala dei Turchi for seven years,” the president of the MareAmico association, which deals with the environmental protection of the coast, told the Guardian.

“Erosions increase and tourists often detach the marl and steal it, as if it were a souvenir. It is crumbling before our eyes. It is a very fragile area and we need to find a way to protect it, otherwise we risk losing it forever.”

Every year, the gigantic white limestone cliff, which drops steeply over the sea, attracts thousands of visitors from all over the world. Its shape is irregular and reminiscent of a staircase, while its name originates from ancient raids on the coast by pirates, probably Saracens.

For years, the ownership of the Scala dei Turchi, on the coast of Realmonte, has been the subject of controversy.

A part of the coast, which is unaffected by the move, is owned by the local authorities in Realmonte. Another piece of the shore is instead the subject of heated controversy, between the local administration and a man who claims to be the owner of a large area of the site, the one most visited by tourists.

The prosecutor of Agrigento has announced that the man has been placed under investigation for occupation of public land.

Luxembourg is first country to make all public transport free