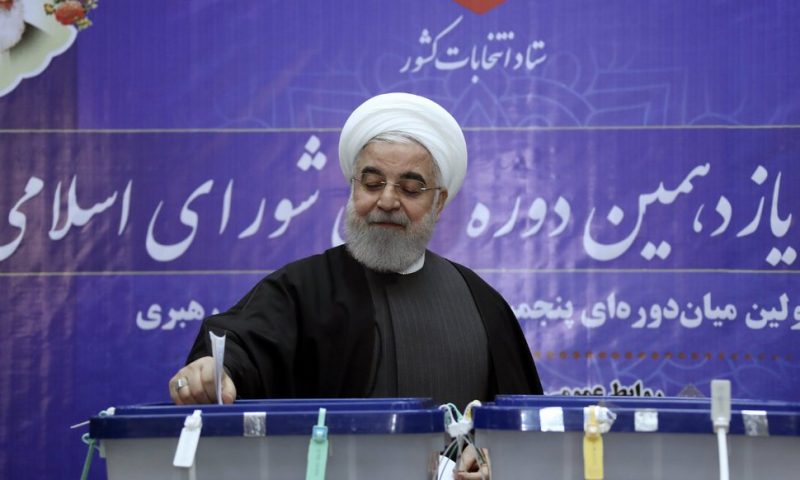 Leaders in Tehran, including Ayatollah Khamenei, believe voter turnout will signal popular support for the regime, despite widespread protests and boycotts.

THE IRANIAN GOVERNMENT is poised to lurch to the political right on Friday following parliamentary elections marked by a general dissatisfaction in the leadership of President Hassan Rouhani, who continues to contend with an economy suffering from the Trump administration’s maximum pressure campaign.

The elections are unlikely to have a significant effect on the direction of the ruling regime in Tehran. Moderates and reformers reportedly have been banned from running, prompting widespread boycotts by students and dissidents, who have held widespread protests against the regime elites. That has led top Iranian leaders to place particular emphasis on voter turnout this year as a gauge of support for the hard-line government.

“Every vote by the people is a slap in the face of an enemy who is hoping for a low turnout,” Gen. Hossein Salami, the commander of Iran’s Islamic Revolutionary Guards Corps, said according to the semi-official Tasnim news.

Ayatollah Ali Khamenei said in a public address earlier this week that “elections are a source for strengthening the country” and that American propaganda seeks to “separate the people from the Islamic system.”

“They won’t succeed,” he said during an address in East Azarbaijan province. “Taking part in the elections nullifies many of the vicious plots of the U.S. and the Zionist regime against Iran. These elections repel the schemes and ploys of the enemies of Iran.”

Khamenei and his fellow hard-liners stand to benefit from a political shift to the right, analysts say, as the religious leader seeks insurance against political dissidence following widespread protests that heightened in the aftermath of the series of retaliatory strikes with the U.S. in recent months. The shift would help conservatives wrest the presidency from Rouhani during general elections next year, as well as confirm the sitting president’s lame duck status. It also undermines hope among Iranians that political reform can come from the ballot box.

“Faced with increasing domestic unrest and Washington’s ongoing maximum pressure campaign, Iranian authorities are looking to use the election to signal strength abroad by alleging popularity at home,” Behnam Ben Taleblu, a senior fellow with the Foundation for the Defense of Democracies, wrote in a Thursday analysis. “If turnout is as low as expected, that will send the opposite message.”

Others believe the Trump administration’s maximum pressure campaign has the knock-on effect of driving the Iranian government further to the right.

“Many Iranians are now resigned to the fact that Mr. Trump could win a second term when Americans vote in November, raising the specter of more years of sanctions and isolation. That is likely to benefit hardliners at the expense of more moderate politicians,” Andrew England and Najmeh Bozorgmehr wrote in the Financial Times.

Iranians went to their polling stations as the Iranian economy continues to suffer under the economic and diplomatic pressure the Trump administration has exerted after withdrawing from the 2015 international agreement governing Tehran’s nuclear program. Secretary of State Mike Pompeo on Thursday announced new sanctions against five people on Iran’s powerful 12-m cember Guardian Council, which comports Islamic and and Iranian law and supervises elections, as well as members of its Elections Supervision Committee.

The new sanctions follow general dissatisfaction among some Iranians that Rouhani has not followed through on a number of his signature campaign promises, including strengthening the country’s economy.

In announcing the sanctions Thursday, Pompeo blasted the Iranian electoral system as one that “silences the voices of the Iranian people and limits their political participation.” The administration assesses 7,000 Iranian candidates were blocked from running. Other estimates say one-third of sitting parliamentarians were disqualified from participating.

“This process is a sham. It is not free or fair,” Pompeo said. “The voices of the Iranian people must be heard. The United States continues to stand with the proud people of Iran and we echo their calls for free and fair elections.”

Pompeo this week toured U.S. military facilities in Saudi Arabia – Iran’s arch foe – where an increased number of American troops and military equipment has staged following an uptick in tensions with Tehran.

His announcement follows other efforts by the administration to highlight what it considers the potent dangers the Iranian regime presents. The Pentagon earlier this week held what has become a rare press conference with a spokesman from the military headquarters overseeing operations in the region to document the seizure by a U.S. Navy warship late last year of Iranian-made weaponry bound for proxy militia fighting in Yemen against forces backed by Saudi Arabia.

Brian Hook, the administration’s special envoy for Iran, described the elections as “political theater” to reporters on Thursday and said that “millions” of Iranian voters had decided not to vote in Friday’s election.

“They like to run this theocratic, corrupt, religious mafia running a country, but they like to present it to the world as a republic,” he said.