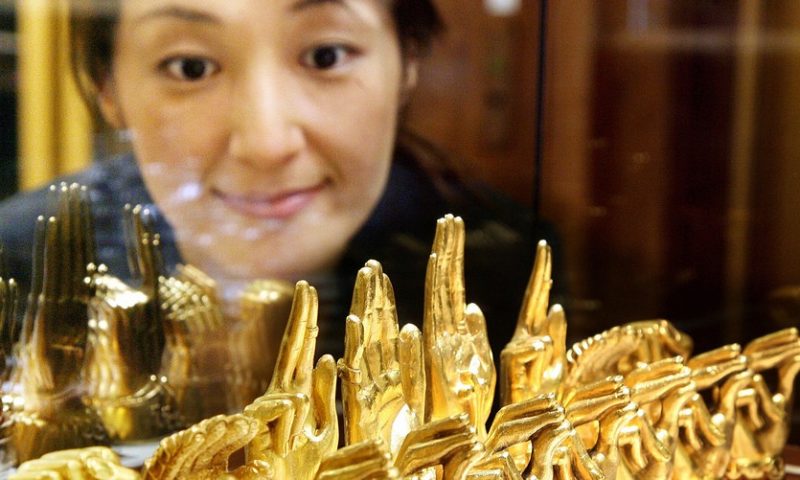 Gold futures climbed Thursday, sending bullion up for a sixth straight session to its highest finish in seven years,as persistent worries about China’s coronavirus and a benign interest-rate environment provide a runway higher for the precious metal.

“Coronavirus fears magnetized investors towards safe-haven assets,” said Lukman Otunuga, senior research analyst at FXTM. “With the virus outbreak fostering uncertainty, unease and anxiety across the board, gold is set to shine through the chaos.”

Gold has climbed in tandem with the U.S. dollar, something that doesn’t usually occur as a stronger greenback can weaken the appeal for dollar-pegged safe haven assets like gold. The U.S. dollar index DXY, -0.53% climbed for a third day Thursday to a three year high.

“The fact gold gains come as stock markets are at, or around, record highs and the dollar index is also at near-three year highs is a little bizarre,” said Craig Erlam, senior market analyst at Oanda.

“The only feasible explanation for gold’s relentless march higher in that situation is the expectation that central banks are going to be forced to pump more liquidity into the system to manage the coronavirus situation,” he said in a daily update.

The PBOC “sent another solid signal to investors to sway them that the bank is ready to support the economy through its monetary policies,” said Naeem Aslam, chief market analyst at AvaTrade.

If U.S. bond yields “continue to trade at historically low levels for the rest of the month,” then gold will rise to $1,672.50 and then $1,707.80 by early March, Karnani told MarketWatch. Low bond yields have resulted in switch over to gold investment over bonds, he added.

Although the daily rate of new cases of COVID-19, the infectious disease that reportedly originated in Wuhan, China, has gone down, investors have been keying in on the spread of coronavirus in other parts of the globe.

South Korea’s Yonhap News Agency said COVID-19 has claimed the nation’s its first life. The mayor of the South Korean city of Daegu urged its 2.5 million people to refrain from going outside, according to the Associated Press. Meanwhile, Japan reported the death of a pair of elderly passengers who had been on a ship that had quarantined because of the virus.

Analysts at Goldman Sachs estimate that the virus could eventually produce a correction to stock markets that have been trading as if the outbreak is contained.

Precious metals pulled back slightly after U.S. economic data early Thursday. Initial jobless claims edged up by 4,000 to 210,000 in the seven days ended Feb. 15, the government said Thursday. The figures are seasonally adjusted. Economists polled by MarketWatch had forecast a 210,000 reading. A reading on manufacturing, meanwhile, the Philadelphia Fed Business Outlook Survey, produced a reading that was its highest in three years, outstripping analysts’ estimates.