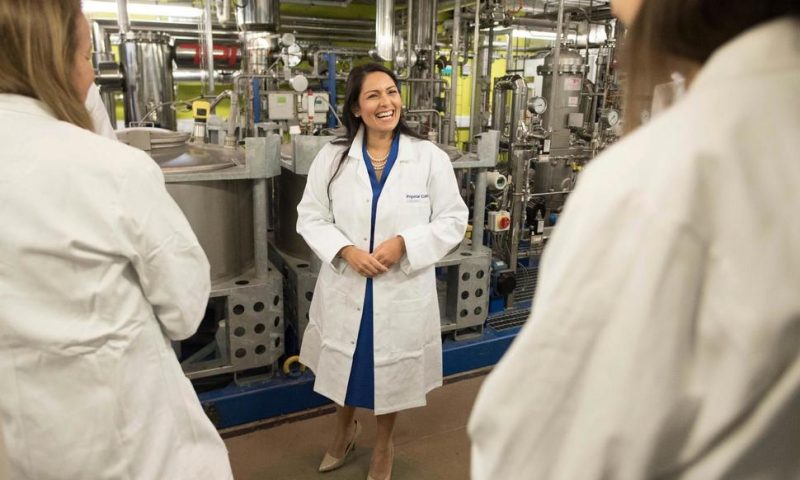 Britain has announced new immigration rules that will take effect next year — and many businesses are alarmed.

LONDON — Vegetables rotting in the fields, food going unprocessed, the elderly and disabled left without care.

That’s the alarming picture painted by some British employers about the impact of new U.K. immigration rules set to be introduced in less than a year.

Farms, food factories and care homes said Wednesday that they will face severe labor shortages under the government’s plans to open Britain to skilled and educated immigrants while shutting out those its deems “low-skilled” workers.

The message from Prime Minister Boris Johnson’s Conservative government was blunt: “Employers will need to adjust.”

“We need to shift the focus of our economy away from a reliance on cheap labor from Europe and instead concentrate on investment in technology and automation,” the government said in a paper laying out its immigration plans.

WHY ARE U.K. IMMIGRATION RULES CHANGING?

Britain’s exit from the European Union last month after 47 years of membership is triggering the biggest change to the country’s immigration rules for decades.

When Britain was part of the EU, citizens of the bloc’s 27 other countries were free to live and work in the U.K. and vice versa.EU workers came to Britain by the hundreds of thousands.

More than 3 million EU citizens currently live in the U.K. They are all entitled to stay. But once a post-Brexit transition period runs out on Dec. 31, that free movement will end and the new U.K. immigration rules will apply to EU and non-EU citizens alike.

Britain’s 2016 decision to leave the EU was driven in part by a belief that large-scale immigration had pushed down wages and increased joblessness among British-born workers.

Many economists say there is little evidence that’s true. The U.K. already has low unemployment, and immigrants create jobs as well as fill them. Nevertheless, “taking back control” of immigration was a key promise made by Johnson and other proponents of Brexit — one the government can now claim to have delivered.

“The real message that is being sent to the electorate in the U.K. is: ‘We have control,’” said Rob McNeil, deputy director of the Migration Observatory at Oxford University.

WHAT ARE THE NEW RULES?

Starting next year, most people hoping to move long-term to Britain will need to speak English to a “required level” —the level of fluency is not specified —and have the offer of a job paying at least 25,600 pounds ($33,000) a year. Prospective immigrants who earn less may still be able to come if they have other skills or work in an area where there are shortages, such as health care.

The new rules don’t cover refugees or asylum-seekers, and there will be separate routes for students andhighly talentedscientists, artists and athletes. But there will be no system of visas for “low-skilled workers” or most self-employed people.

WHAT DO BUSINESSES THINK?

The British immigration proposals mean a radical — and unwelcome — change for sectors of the U.K. economy that rely heavily on EU workers. The British government’s own estimate is that 70% of the more than 1 million EU citizens who have moved to the U.K. since 2004 would not have qualified for visas under the new rules.

Many migrants from eastern Europe have jobs picking Britain’s fruit and vegetables and working in food-processing factories.

Toby Williams, chairman of the National Farmers’ Union in southern England’s Kent county, said British workers simply don’t want those tough, relatively low-paid jobs. He said Britain’s fruit, vegetable and flower farms need about 70,000 seasonal workers, but the government is proposing to give visas to only 10,000 a year.

He said automation could help some, butnot in the short term.

“There is work being done on that but it’s not going to be in five minutes’ time,” Williams told Sky News. “You’re talking 10 years’ out, probably.”

More than 100,000 EU citizenswork in caring for Britain’s elderly, disabled or chronically ill — just under 1 in 10 of the total workforce in a sector that already has many unfilled positions.

Businesses that employ bakers, butchers and baristas are also worried. Mark Harrison, policy manager at the Food and Drink Federation, urged the Conservative government to open up an immigration route for entry-level workers.

“The food and drink industry is reliant on workers at all skill levels,” he said. “We have concerns about access to those potential employees who won’t qualify through these ‘skilled’ routes, such as bakery assistants, meat processors, and workers essential to the production of huge array of basic foodstuffs such as cheese, pasta and sausages.”

The government appears unmoved by their concerns.

“It is about time businesses started to invest in people in this country,” Home Secretary Priti Patel said Wednesday.

WILL U.K. IMMIGRATION FALL? HOW WILL THAT AFFECT THE U.K ECONOMY?

The government claims the new rules will reduce net immigration from its current level of more than 200,000 people a year. But it’s unclear whether the numbers really will fall.

Jonathan Portes, professor of economics and public policy at King’s College London, said “most of the impact has already happened – migration from the EU has dropped sharply” since the 2016 Brexit referendum.

A majority of immigrants to Britain now come from outside the 27-nation EU — and the new rules will actually make it easier for them to move to the U.K. by lowering education and salary thresholds.

The government’s plans still need to be turned into law, and many questions remain about visa fees, paperwork and other aspects of the system.But Johnson’s Conservatives won a substantial majority in Britain’s general election in December, so the party has the numbers to pass its plan into law.

“If the government delivers on its promises to make the new system quicker, more efficient, less bureaucratic and more user-friendly, it could be good news for employers and the wider economy,” Portes said. “But that is a very big ‘if’.”

Ending Putin’s Support of Venezuela No Easy Feat for US