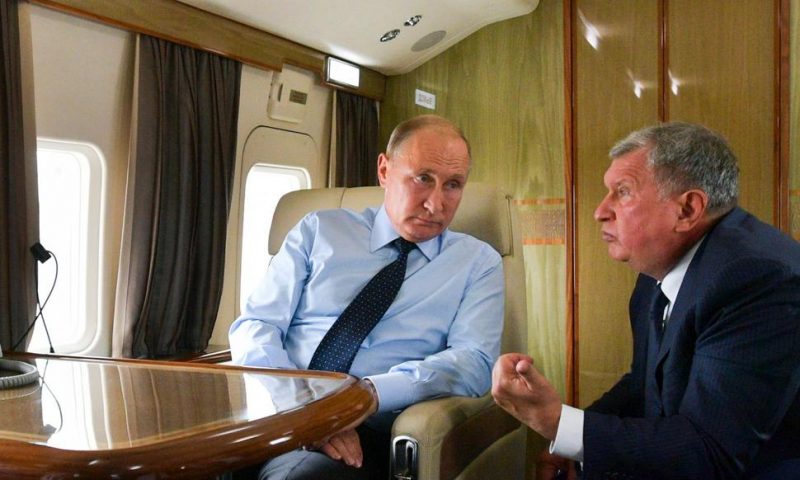 In 2016, the head of Russia’s largest oil company traveled to the birthplace of Hugo Chavez, in the empty, sweltering plains of Venezuela, to unveil a giant bronze statue of the late socialist leader that he commissioned from a Russian artist.

MOSCOW — In October 2016, the head of Russia’s largest oil company traveled to the birthplace of Hugo Chávez, in the empty, sweltering plains of Venezuela, to unveil a giant bronze statue of the late socialist leader that he and his longtime friend, Russian President Vladimir Putin, commissioned from a prominent Russian artist.

It was a turning point in the relationship between Russia and Venezuela, and Rosneft CEO Igor Sechin brought with him a 600-year-old choir from a Moscow monastery to celebrate. Speaking to throngs of red-shirted government supporters in fluent Spanish gleaned from his days as a Soviet military translator in Africa, Sechin praised Chávez as a “leader of multi-polarity” and a “symbol of an entire era.”

“We have no choice between victory or death,” said Sechin, quoting a Venezuelan independence hero to describe the deepening ties between the two U.S. adversaries. ”We must achieve victory.”

Now the Trump administration wants to break up that blossoming alliance as part of its campaign to oust Chavez’s successor, Nicolás Maduro.

On Tuesday, the Treasury Department blocked U.S. companies from doing business with Rosneft Trading SA, accusing the Geneva subsidiary of the Russian state-owned oil giant of providing a critical lifeline to Maduro as he seeks to bypass U.S. sanctions.

For months, U.S. officials have been warning foreign companies that they could face retaliation if they continue to do business with Maduro. Those admonishments have been aimed primarily at Russia, which U.S. officials say handles about 70% of Venezuelan oil transactions that have been rerouted since the Trump administration a year ago made it illegal for Americans to by crude from Venezuela.

Francisco Monaldi, a Venezuelan oil expert at Rice University in Houston, said the latest actions should send a chill through companies in Spain, China and elsewhere that continue to partner with state-run oil monopoly PDVSA. It could also foretell the ending of a special license for Chevron that has so far exempted the San Ramon, California-based company from having to pull out of the country, where it’s a partner in joint ventures with PDVSA that produce about a quarter of the OPEC nation’s total production.

PDVSA in a statement condemned what it called “economic assassination” by the U.S. aimed at taking control of Venezuela’s oil industry. Foreign Minister Jorge Arreaza said the new actions would bolster Venezuela’s lawsuit filed against the Trump administration at the International Criminal Court for crimes against humanity.

Rosneft operates with PDVSA several oil fields that it acquired after U.S. drillers were forced out by Chavez’s nationalization drive.

But as the new, go-to supplier of the country’s pariah crude it wins two ways, according to analysts. First, Rosneft purchases Venezuela’s premium Merey 16 crude at a steep discount. It then uses the proceeds from its sale to pay down $6.5 billion lent to PDVSA since 2014 for the purchase of Russian-made weaponry and other goods.

Meanwhile, refineries along the U.S. Gulf Coast that used to depend on Venezuela’s heavy crude have nearly tripled their imports of unfinished Russian petroleum products in the year since sanctions have been in place, according to U.S. Energy Department data.

To avoid complications for customers in China and India, Rosneft has been hiring tankers that try to hide their cargo by turning off their mandatory tracking systems and carrying out risky ship-to-ship transfers off the coast of west Africa and other distant locations.

In the short term, he expects Maduro will have to pay more to find another intermediary to take on the added risk of moving the country’s oil. That means his cash-strapped government will have even less money to import scarce food and medical supplies as well as repair the country’s crumbling electricity infrastructure. And with storage facilities already at capacity, production that is already at a seven-decade low is likely to fall even further, he added.

Still, short of a U.S. naval blockade of Venezuelan ports — a military option that the Trump administration has refused to rule out but has shown no sign of pursuing — nobody expects oil sales from the nation sitting atop the world’s largest petroleum reserves to dry up completely.

“They can find always find ways to sell it, but it’s much harder,” said Monaldi.

Even less clear is the impact on the U.S.’ goal of engaging Russia to find a solution to Venezuela’s year-old political impasse.

The U.S. leads a group of now nearly 60 nations that recognize opposition leader Juan Guaidó as Venezuela’s rightful leader following what it considers Maduro’s fraudulent 2018 re-election. In turn, Russia has accused the Trump administration of spreading false information to engineer a coup, needling the U.S. in what has traditionally been considered Washington’s backyard as the two sides wage proxy battles for influence in Syria, Ukraine and other global hot spots.

Richard Nephew, an energy researcher at Columbia University, said that in sparing Rosneft itself, and only going after one of its many units, the impact on Russia’s continued political support for Maduro is likely to be more muted.

The bulk of Rosneft’s long-term supply contracts are arranged directly by the parent company in Moscow, with the Swiss-based trading unit handling spot sales, he said. The sanctions also include a three-month winding down period, which should give the company — and ravenous oil traders — plenty of time to redirect transactions, including with Venezuela.

In addition, Rosneft and Sechin were already partially sanctioned in 2014 in retaliation for Russia’s annexation of Crimean peninsula in Ukraine. As a result, many U.S. companies had already been steering clear of the company.

“This seems more like a warning shot designed to look bigger than it actually is,” said Nephew, who helped design U.S. sanctions policy while at the State Department under President Barack Obama. “It’s shooting someone who is Russian sounding without really punishing the Russians themselves.”

Several pro-Putin lawmakers were dismissive of the actions, saying they would appeal to the World Trade Organization to remove what they described as unilateral, unlawful U.S. actions.

“I think this issue can be resolved,” Vladimir Dzhabarov, a member of Russia’s upper house of parliament, told RIA Novosti news agency. “They’re smart over there (in Rosneft) and they will find a way to get around it.”

But even if Putin maintains outward support for Maduro, it’s unclear if he’ll double down and lend even more money to the bankrupt country.

At the height of unrest in 2018, anti-government protesters tried to destroy the Chávez statue dedicated by Russia. Today, it’s under heavy guard, pointing to the uneasy calm that prevails in the normally pro-government Venezuelan countryside, where power outages are an almost daily occurrence and misery widespread.

While Venezuela has stayed current on its debt to Russia, and is expected to pay off the last remaining amount in the coming weeks, it’s defaulted on almost all other lenders and investors in the country’s bonds. Meanwhile, its debt with Russia is backed by a lien on 49.9% of PDVSA’s American subsidiary, Houston-based CITGO, control of which the Trump administration has handed to a board named by Guaidó.

“The Russians are nothing if not good chess players,” Russ Dallen, the Miami-based head of Caracas Capital Markets brokerage, wrote in a recent report. Rosneft’s “choice here will be an important tell for us about the future direction of their policy.”

US Stocks Brush off Latest Loss, Return to Record Heights