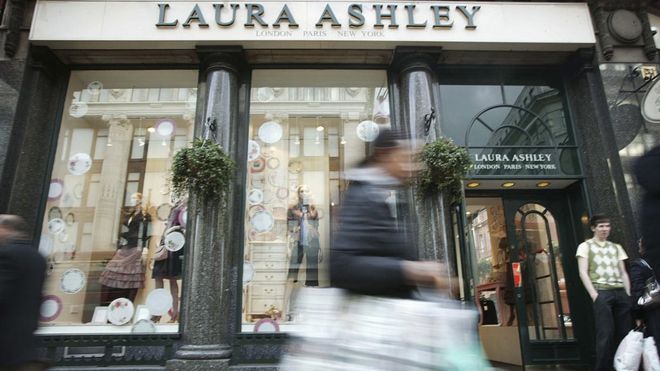 Fashion and home retailer Laura Ashley is in talks with a key lender to enable it to access sufficient money to allow it to continue trading.

The retailer said if it could not get the “requisite level of funding” then it would need to “consider all appropriate options”.

It blamed the fall on “market headwinds” and weaker spending.

It said this had led to a decline in sales of more expensive items.

Laura Ashley welcomed the funding talks between its majority shareholder, the Malaysian group MUI, and its lender Wells Fargo. In addition it said it was “well advanced in developing its turnaround strategy, the execution of which remains at an early stage, but the management team is encouraged by the early signs”.

In December 2018, 40 Laura Ashley stores were earmarked to close, amid tough trading conditions on the UK High Street.

Monday’s statement by Laura Ashley was issued in “response to press speculation” and followed a story in The Sunday Times.

Chairman Andrew Khoo said: “We acknowledge that recent trading conditions, in line with the overall UK retail market, have indeed been challenging,”

He added there was a “robust plan” in place to turn the business around.

“The major shareholders have indicated their continued confidence in the business and are fully supportive of the management team and execution of the transformation plan,” he added.

Founded in 1953, Laura Ashley was a prominent name on the UK high street and one of the world’s leading clothing brands in the 1970s and 1980s.

But it has struggled to stay relevant, with the share price tumbling 90% over the past five years.

It will announce its half year results on 20 February.