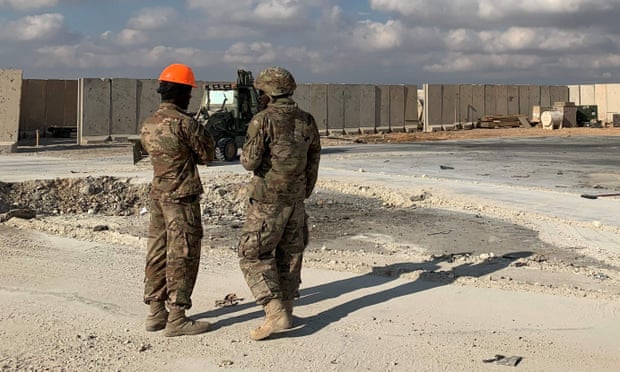 Multiple rockets hit near the US embassy in Iraq’s capital early on Sunday, an American military source said, the latest in a flurry of attacks against US assets in the country.

The assault sent warning sirens blaring across the diplomatic compound but it was unclear exactly what was hit and how many rockets made impact, the US source and a western diplomat based nearby said. There were no immediate reports of casualties.

Agence France-Presse’s correspondents heard multiple strong explosions followed by aircraft circling near the green zone, the high-security enclave where the US mission is located.

It was the 19th attack since October to target either the embassy or the roughly 5,200 US troops stationed alongside local forces across Iraq. The attacks are never claimed but the US has pointed the finger at Iran-backed groups within the Hashed al-Shaabi, a military network officially incorporated into Iraq’s state security forces.

In late December, a rocket attack on the northern Iraqi base of K1 left one US contractor dead and unleashed a dramatic series of events. Washington responded with retaliatory strikes against a hardline Hashed faction in western Iraq, and days later an American drone strike in Baghdad killed the top Iranian general Qassem Suleimani and his right-hand man, Hashed, deputy chief Abu Mahdi al-Muhandis.

Hashed factions have vowed revenge for the pair’s death, insisting US troops should immediately leave Iraq.

Sunday’s attack came just hours after one of the Hashed’s Iran-backed factions, Harakat al-Nujaba, announced a “countdown” to ousting American forces from the country. He tweeted a photograph of what he claimed was an American military vehicle, adding: “We are closer than you think.”

US Stocks Post Small Gains, Major Indexes up for the Week