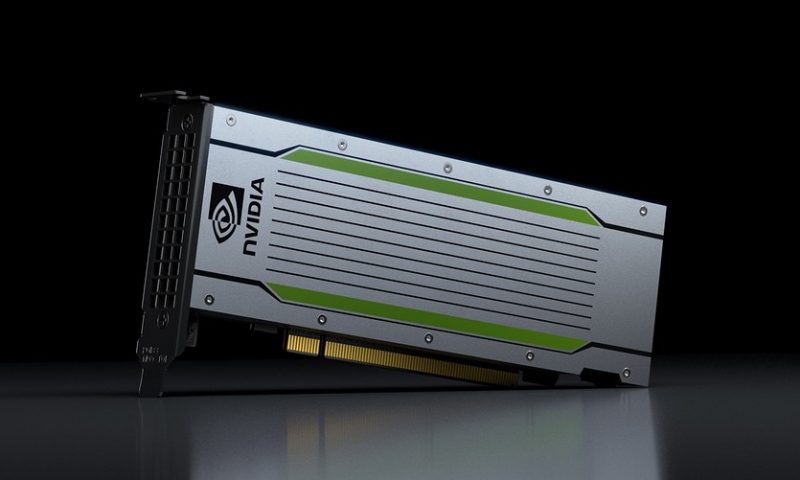 Nvidia Corp. saw a huge turnaround at the end of a rough year, powered in large part by a surge in sales of its graphics processors into the data-center market.

Nvidia NVDA, +5.94% reported record quarterly data-center sales of $968 million Thursday, an unexpected and eye-popping number. Nvidia had never topped even $800 million in quarterly server-chip sales previously, and Wall Street was expecting $825.8 million — Nvidia hopped over that hurdle by a whopping 17%.

The beat was a welcome end to a brutal year, in which Nvidia dealt with a “crypto hangover” that slammed its gaming business and a strange stall in the server business as some hyperscale cloud providers slowed purchases. The company’s stock has rebounded along with the business in the past six months, with shares up 73.5%, as the S&P 500 index SPX, -0.04% has increased 15.3%.

Nvidia Chief Executive Jensen Huang told analysts that new breakthroughs in artificial intelligence, such as in the areas of recommendation engines at the heart of internet search, helped fuel more sales to both public cloud-service providers, often referred to as hyperscalers, and specific industries. Nvidia said sales of their chips for the data center have been and remain about split at about 50% between those two segments.

“All of these key areas were growing,” Colette Kress, Nvidia’s chief financial officer, said in a brief interview with MarketWatch. “The industries are still in early stages.”

Nvidia would not project performance beyond the first quarter, but executives were optimistic about even more potential in the data center going forward. After seeing many other hardware companies talk in the past few months about lumpiness and up and down results selling to hyperscales and corporate customers, investors might want to approach this buoyancy with some caution. But after Intel’s strong results and Nvidia’s, it seems as though the growth in data centers has returned.

In Nvidia’s big holiday fourth quarter, gaming soared 56%, fueled by holiday shopping combined with Singles Day in Asia in early November. But while Asia helped Nvidia in this quarter, China and the quickly spreading coronavirus will impact the first quarter, with the company currently estimating a hit of about $100 million to revenue next quarter.

“We are still in the really early days of coronavirus,” Kress said, adding that is the company’s best estimate of the potential lost revenue, split between gaming and data center.

The only disappointment in the quarter was automotive, which saw flat revenue at $163 million, as the industry continues to struggle with slower sales in China and at the same time plans for a future with self-driving cars. “Although the automotive industry is struggling in the near-term, their opportunity has never been better, in my opinion,” Huang said.

Nvidia’s automotive business has always been seen as icing on the cake anyway, as long as its gaming and data-center business are performing as expected. After a rough period, both — especially the server segment — appear to be back on track.