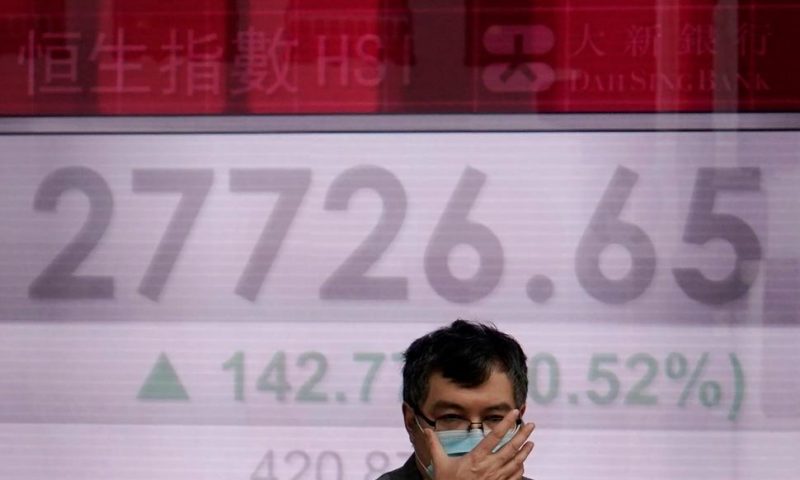 Global shares are up on hopes that governments and central banks can help minimize the economic pain from the the outbreak of the new virus in China.

TOKYO — Global stock markets rose Wednesday on hopes that central banks and governments are able to help the economy get past the disruptions created by the outbreak of a new virus, mostly in China.

“Despite coronavirus concerns, investors tend to believe that central banks and policymakers have measures to stimulate the economy during and post the public health crisis,” said analysts at financial firm CMC Markets in a report.

China reported 97 more deaths from the new disease, named COVID-19, pushing the total dead past 1,100, even as the country remained largely closed down to prevent its spread. The number of cases worldwide is about 45,000, all but a few hundred in China.

Investor sentiment in Asia was cheered somewhat by Wall Street, where modest gains overnight nudged the S&P 500 and Nasdaq to all-time highs for the second straight day.

Investors weighed another batch of mostly solid company earnings reports. Sprint soared after a federal judge cleared a major obstacle to the company being acquired by T-Mobile. Cruise operators, hotels and other companies that focus on travel made solid gains, the latest sign that traders are feeling less worried about the economic impact from the virus outbreak.

Investors are also getting some encouragement from Federal Reserve Chairman Jerome Powell’s comment in a report to Congress, that it was too early to assess the threat the virus poses to the U.S. economy, but he noted that the economy “is in a very good place” with strong job creation and moderate growth.

What Is the U.N.’s World Urban Forum?