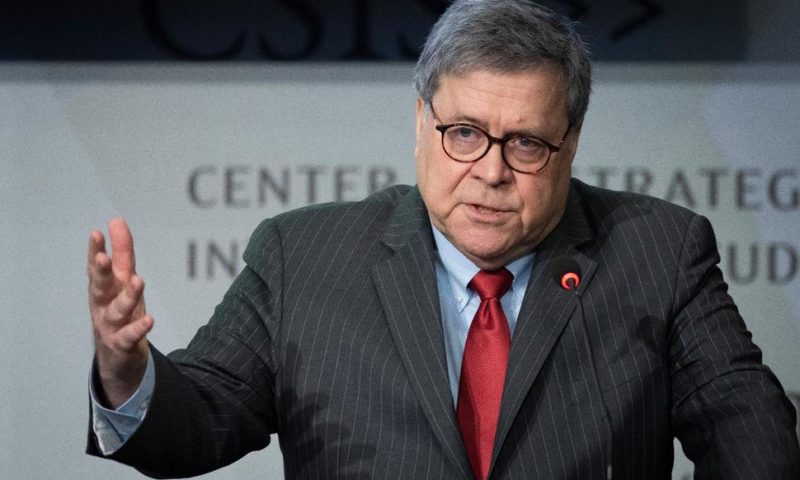 But the notion isn’t terribly popular — not even within the administration.

On Thursday, Attorney General William Barr said the U.S. government should consider taking a “ controlling stake ” in the European companies Nokia and Ericsson to thwart the global ambitions of China-based Huawei, which holds a leading share of the market for 5G wireless equipment. The federal government could do so directly or via a consortium of U.S. companies and private investors, Barr said.

“That’s the plan the president has endorsed,” Pence said. Later on Friday, Trump economic adviser Larry Kudlow also argued against the idea, telling reporters at the White House that “the U.S. government is not in the business of buying companies, whether they’re domestic or foreign.”

Trump has not tweeted about the proposal.

Depending on how you count it, Barr’s speech is the second or third time people in Trump’s administration or 2020 campaign have suggested direct federal involvement in 5G networks, which boast faster speeds and promise a variety of new applications. Barr suggested in his speech that 5G speeds will turn wireless networks into “the central nervous system of the next generation of internet, called the ‘Industrial Internet,’” with potentially dramatic economic consequences.

Then in 2019, members of Trump’s reelection team offered up an idea, first reported by Politico, to create a new “wholesale” 5G network run under government contract that would provide bandwidth to network operators on an as-needed basis. Trump himself repudiated that notion after criticism from industry and other government officials, telling reporters that 5G remains “private-sector driven and private-sector led.”

Barr’s speech, however, appears to be the first time a member of the Trump administration has publicly endorsed direct U.S. government ownership of 5G suppliers. The specific steps he suggested carry echoes of “ industrial policy,” which calls for a level of government involvement in the free market anathema to many economists and, at least previously, most Republican politicians.

The idea enjoyed brief U.S. popularity in the 1980s amid fears that Japan’s government-backed companies were destroying the U.S. technology industry. It then subsided as American tech companies surged ahead in the 1990s. Critics of free trade frequently note that China and Europe still run their own industrial policies.

Barr argued that Huawei — and, by extension, the Chinese government — stands to dominate the “industrial internet” and reap the economic rewards unless the U.S. and its allies take quick, dramatic and unprecedented action. Huawei is the world’s largest maker of telecom equipment.

“I would call that crazy,” Michael Thelander, CEO of telecom consultancy Signals Research Group, said of Barr’s idea of taking over European equipment companies. For the government to effectively take over a corporate entity “doesn’t sound like a very Republican position,” he said.

AT&T CEO Randall Stephenson criticized Barr’s idea of a government stake in private companies during a CNBC interview, and said that investing in software would help get around the need for Huawei.

The Trump administration has positioned the transition to 5G as a race, particularly with China. It has cast Huawei as a de facto arm of the Chinese government that could enable global espionage. Huawei has denied these allegations.

Despite its global footprint, Huawei has been largely absent from the U.S. since 2012, when a congressional panel warned phone carriers to avoid Huawei. The U.S. government has also taken steps to try to excise Huawei from small and rural wireless networks that still rely on its equipment, and has pressured allies to kick Huawei out of their telecom networks.

“There’s a certain amount of desperation here as the U.S. government tries to figure out what do on 5G,” said Washington lawyer David Hanke, a former GOP congressional aide. Hanke, however, said Barr’s suggestion might be “the least-worst option” for dealing with Huawei, since the alternative would be permanent Chinese domination of the global market for 5G technology.

Huawei has grown in Asia, Europe and Africa, helped by its dramatically lower prices, said Roger Entner, a telecom expert with Recon Analytics. Nokia and Ericsson have lost some market share along the way.

Any acquisition of a majority stake in Ericsson or Nokia by an American company, let alone the U.S. government, would likely draw close scrutiny by European governments and EU regulators. Some European nations have also suggested setting up regional champions that could compete with U.S. and Chinese giants.

The U.S. has other alternatives. A bipartisan group of senators have proposed a bill to invest $1 billion in Western alternatives to Huawei and ZTE, another Chinese telecom-equipment maker, by focusing on software. Kudlow also said in a recent interview with the Wall Street Journal that the administration was working with U.S. tech and telecom companies to develop software that could help reduce the need for Huawei’s equipment.

Barr dismissed that approach Thursday, calling it “pie in the sky” that could take a decade or more to implement. Telecom experts say it could be ready much sooner.

The U.S. could also support research and development at the European companies, said James Lewis, director of the Technology Policy Program at the Center for Strategic and International Studies. He noted that Nokia and Ericsson are both big employers in the U.S.

The FCC declined to comment on Barr’s remarks. Democratic FCC commissioner Jessica Rosenworcel said in a statement that discord over 5G policy showed that the Trump administration doesn’t have a plan to “secure our 5G future.”

Ericsson and Nokia did not immediately respond to requests for comment.

Barr held bonds issued by Nokia as of December 2018, but he was required to sell them along with dozens of other holdings when he became attorney general last year, according to financial disclosure reports filed with a federal ethics agency. He has worked in the telecom field as general counsel for Verizon, which he left in 2008.