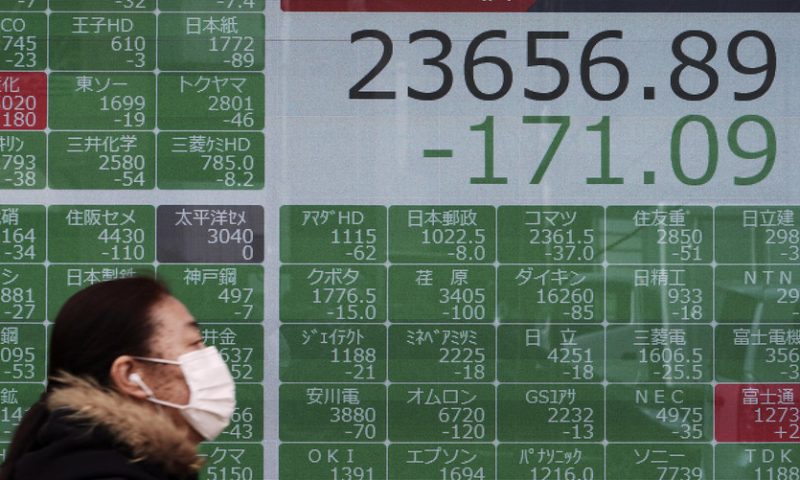 Investors’ optimism may have been premature; stocks in Hong Kong, mainland China fall

Asian stock markets slid Monday after China reported an uptick in new cases of its virus outbreak and analysts warned optimism the disease is under control might be premature.

A decline last week in the number of new Chinese virus cases reported daily fed investor optimism the disease and its economic impact might fade. But economists and industry analysts warn the outbreak still is weighing on retailing, tourism, electronics, shipping and other fields.

Markets took the decline in daily new cases “as an early indication of containment,” said Vishnu Varathan of Mizuho Bank in a report.

“But this may well prove to be premature relief,” said Varathan. “And so, the “Coro-NO-virus” relief is at best shallow, if not essentially no relief, at this point.”

China reported 3,062 new virus cases in the 24 hours through midnight Sunday. That’s up 15% from Saturday’s tally in a reminder of enduring uncertainty about the disease, which has prompted authorities to cut most access to the central city of Wuhan and impose travel and other restrictions on others.

China’s central bank promised additional lending to cushion companies against the blow of intensive controls that closed shops, factories and other businesses nationwide. The government promised tax cuts and subsidies to farmers, makers of medical supplies and other companies.

Authorities are using targeted loans and government spending to fight the virus’s effects instead of a broad-based stimulus, said Iris Pang of ING in a report.

“It seems that policymakers do not want to confuse emergency policies with standard easing policies,” said Pang. “We may not see broad-based economic policy actions in the near term.”

On Wall Street, stocks snapped a four-day winning streak and fell Friday but closed out the U.S. market’s best week in eight months.

Bitcoin back above $10,000 for first time since September