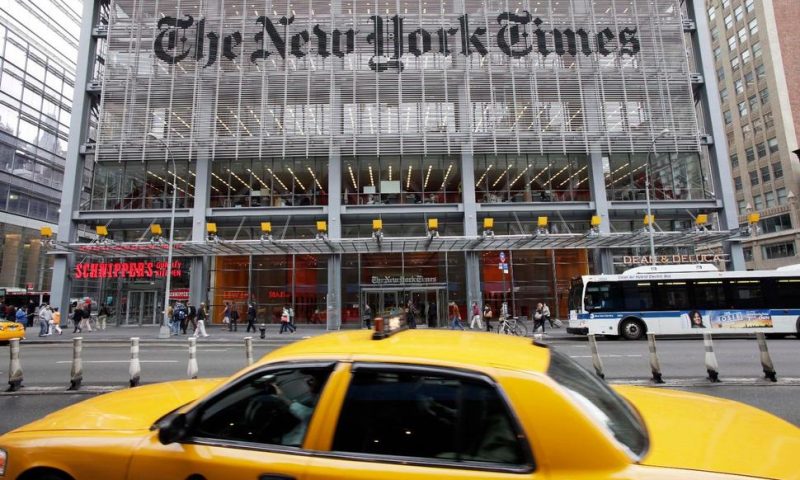 The publisher of The New York Times has posted a higher profit for its fourth quarter as the paper continued to add digital subscribers.

NEW YORK — The publisher of The New York Times posted a 20% gain in fourth-quarter profits as the paper continued to add digital subscribers, although ad revenue declined both online and in print.

In 2019, the Times set a goal of 10 million subscribers by 2025, and hit the halfway mark in the latest quarter with 5.3 million print and digital subscribers. It sells access to its newspaper as well as separate subscriptions for its crosswords and recipes. In the fourth quarter, it added 342,000 new digital subscriptions. It added more than 1 million in 2019.

The company is transitioning from its roots in print to a more sustainable online model for news; many local outlets and other newspaper chains have struggled with similar efforts. News Corp. said Thursday that The Wall Street Journal also added digital subscribers in its most recent quarter, with 1.9 million average daily digital subscribers at the end of the year, up from 1.7 million in 2018.

The Times is raising the price of its digital-only news subscription to $17 a month from $15 for many customers, the first such increase since it launched in 2011. It will affect 750,000 customers by the end of the year.

Print-ad revenue slid 10.5% to $79.1 million, while digital-ad revenue fell 10.8% to $92.2 million. Print-ad sales have long been falling as readers shift online. The company said it was a difficult comparison to a strong 2018 quarter, and noted on a call with analysts that digital advertising has been tough for publishers as the major tech companies like Facebook and Google take most of advertisers’ dollars. It said that it is trying to counteract that by developing “distinctive” ad products in areas such as branded content and podcasts. Ad revenue grew from podcasts.

The company expects digital advertising revenue to continue to drop this quarter but predicts a return to growth in the second half of the year.

The newspaper publisher also got a big revenue bump from licensing fees for its TV show, “The Weekly,” which launched last summer.

For the year, the New York-based company reported profit of $140 million on revenue of $1.81 billion.