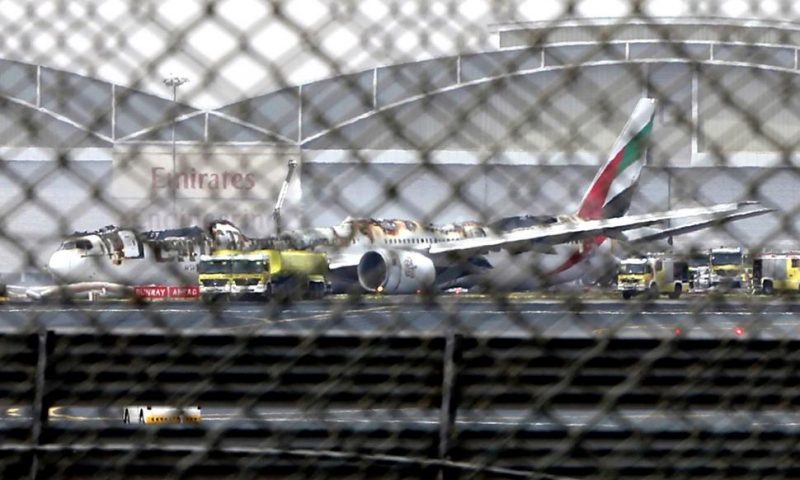 An investigative report has found that the pilots of an Emirates flight that crashed in 2016 and caught fire in Dubai didn’t to realize the engines of their Boeing 777 remained idle as they tried to take off from a failed landing attempt.

DUBAI, United Arab Emirates — The pilots of an Emirates flight that crashed in 2016 and caught fire in Dubai did not realize the engines of their Boeing 777 remained idle as they tried to take off from a failed landing attempt, according to an investigative report released on Thursday.

Without power from the engines to lift the plane, Flight EK521 coming from Thiruvananthapuram, India, was doomed to crash on the runway at Dubai International Airport on Aug. 3, 2016. But prior to its attempt to land, air-traffic controllers also failed to warn the pilots that two other flights before it couldn’t land due to windshear, a final report by the United Arab Emirates’ General Civil Aviation Authority said.

The crash represents the most-serious incident ever to face the government-owned long-haul carrier in its 34-year history. While the 300 passengers and crew onboard the Boeing 777-300 escaped with their lives even as high winds blew away some of plane’s evacuation slides, a subsequent explosion that engulfed the aircraft in flames killed a firefighter on the ground.

“The flight crew reliance on automation and lack of training in flying go-arounds from close to the runway surface … significantly affected the flight crew performance in a critical flight situation which was different to that experienced by them during their simulated training flights,” the report said.

In a statement, Emirates chief operating officer Adel al-Redha said the airline had taken steps to improve based on the findings of the investigative report, as well as from its own internal probe into the crash.

“Maintaining safe operations is a top priority at Emirates and we are committed to the continuous review and improvement of our operations,” al-Redha said.

Dubai Air Navigation Services, which runs the air-traffic control at the airport, did not respond to a request for comment.

As pilots attempted to land the flight, they didn’t realize that the plane touched down for some six seconds on the runway, the report found. Because of that, they didn’t realize the plane’s takeoff-go around switch had been turned off, investigators said. That switch automatically pushes up the throttle of the airplane, providing more power to head back into the sky again.

Without that power, the plane tilted upward only to slam back down onto Runway 12L at the airport, the world’s busiest for international travel. The plane skidded down the runway for 800 meters (half a mile) before coming to a halt.

The report praised the flight’s cabin crew for their “highest professional standard” in getting all the passengers onboard off the aircraft, even when the wind blew slides away and some passengers pushed their way off with their carry-on luggage.

The overall temperature at the time of the crash was 48.9 degrees Celsius (120 degrees Fahrenheit). The hotter the temperature, the more power is needed to get a plane airborne. There also had been windshear reported at the airport. That’s a sudden change in wind speed or direction which can affect planes.

The Emirates crash-landing came after another Dubai government-owned airline, discount carrier FlyDubai, suffered a March 2016 crash in Rostov-on-Don, Russia, that killed all 62 people aboard one of its 737-800 jetliners. Russian investigators blamed pilot error for that crash.