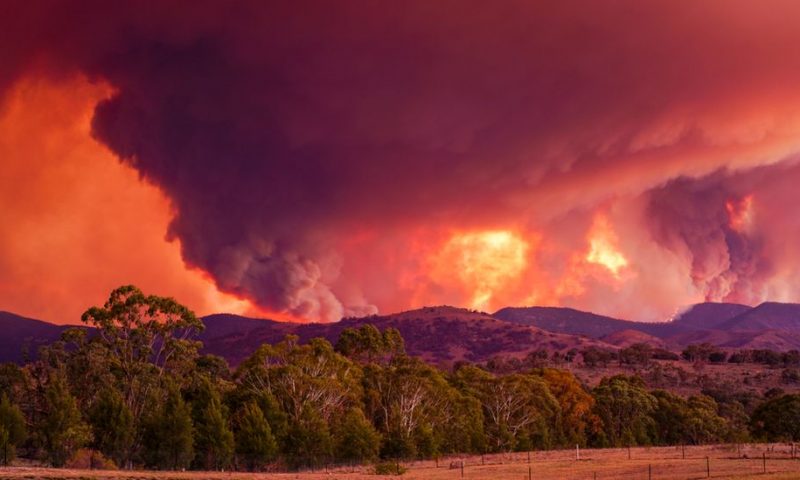 A bushfire near the Australian Capital Territory (ACT) continues to rage, although the damage is not as serious as previously feared.

Residents in some areas around the capital, Canberra, had been warned that it was “too late to leave” and they should try to seek shelter.

The fire south of Canberra is still out of control and has already burned more than 20% of the territory’s landscape.

However, the fires did not reach the capital’s southern suburbs.

Hot and windy conditions are expected to last through the weekend.

Since September, bushfires in Australia have killed at least 33 people and destroyed thousands of homes. More than 11 million hectares of land have been scorched so far.

What is happening in Canberra?

The ACT declared a state of emergency on Friday – the first in the area since deadly fires in 2003.

People living in affected areas are being urged to fill up their bathtubs, buckets and sinks, so that when the fire arrives, they have access to water – to extinguish flames and to drink.

The fire south of the capital is still burning in the Namadgi National Park. It has already destroyed more than a fifth of the territory’s landscape.

Although the blaze did not enter Canberra’s southernmost suburbs as earlier feared, ACT Emergency Services Agency Commissioner Georgeina Whelan said there was still plenty of work to do.

“The next 24 hours are going to be very challenging for us indeed, probably the most challenging the ACT has seen this entire fire season,” she told ABC News.

“We may get thunderstorms … we could see some very erratic fire behaviour, some very challenging conditions, and certainly some very intense firefighting in the next 24 hours.”

The ACT, a small territory located between Sydney and Melbourne, has about 400,000 residents.

Fires have raged near Canberra for weeks. Last Thursday, the city’s airport was shut down when a blaze threatened to breach its perimeter.

What is happening in NSW?

There are still 63 bush and grass fires burning in New South Wales (NSW), with 25 yet to be contained as crews fought the blaze overnight.

However, the NSW Rural Fire Service tweeted: “Fire activity has eased across the fireground.”

While five emergency warnings were in place on Saturday afternoon for blazes across the NSW south coast and southeast, by Saturday evening just one was kept at the highest level.