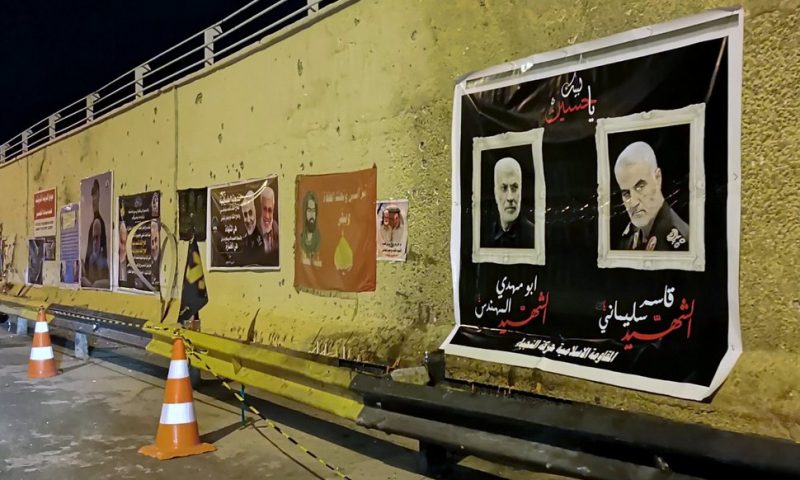 Iran is planning to mobilize loyal forces to attack U.S. interests as revenge for the Jan. 3 killing of Qassem Soleimani, officials say.

IRAN IS PLANNING attacks against Americans in Africa in retaliation for the Jan. 3 drone strike President Donald Trump ordered to kill the influential Iranian Gen. Qassem Soleimani, the top officer for U.S. operations there said Thursday.

Townsend, who formerly oversaw the war against the Islamic State group, told the committee that Iran appears to be mobilizing its elite Quds Force – the overseas wing of its zealous Islamic Revolutionary Guards Corps – and Hezbollah, Lebanon’s potent militant political movement that Soleimani helped establish and which still receives significant support from Tehran, to attack Americans.

The threat Iran poses has not become specific enough for Africa Command, also known as AFRICOM, to change any of its current activities, Townsend said, but he added, “we are watching and listening for that.”

The news comes at a time of heightened concern for U.S. forces deployed to the Middle East and to Africa, following Iran’s retalitatory Jan. 7 ballistic missile strike against U.S. bases in Iraq. The Defense Department had already bolstered its protective forces in the region – including increased Navy ship deployments and 15,000 new troops last year – as a result of the Trump administration’s “maximum pressure campaign” designed to squeeze Tehran economically and diplomatically, and following Soleimani’s killing, through military action.

Townsend’s assessment also follows the surprise and troubling attack earlier this month by local insurgents against a little-known U.S. air base in Manda Bay, Kenya, near the Somali border. The militants overran the base and killed three Americans, prompting Townsend’s command to deploy 120 infantrymen from the 101st Airborne Division to restore security there. The base is currently under review for further security improvements.

The AFRICOM commander, who testified alongside U.S. Southern Command chief Navy Adm. Craig Faller, must address the new security concerns while also facing the prospect of sharp reductions from the roughly 5,000 U.S. forces – largely special operations troops – and 1,000 civilians and contractors currently operating in his area of responsibility as the Trump administration considers redeploying its limited resources to counter what it considers more grave threats posed by China and Russia.

“We’re not going to totally withdraw forces from Africa,” Defense Secretary Mark Esper told reporters in a briefing on Thursday. Such a statement would usually be obvious, though concerns remain that a president who suddenly ordered the withdrawal of all U.S. forces from Syria and Iraq may make a similar decision for operations on a continent that notoriously receives less attention in Washington than those in the Middle East or against global powers. U.S. military leaders have found ways to maintain smaller footprints of forces in those countries despite the president’s initial orders.

The increased threats against U.S. forces in places like Somalia and Niger – the site of an ambush by an affiliate of the Islamic State group that killed four American troops in 2017 – combined with the fact that their missions are broadly based on counterterror operations and bolstering local militaries would likely come under particular scrutiny for Trump, who has prioritized domestic American interests over expensive and, at times, deadly foreign adventures.

In an appeal on Thursday, Townsend stressed the economic stability that accompanies a U.S. presence as well as the complex security problems that face the U.S. in Africa, particularly the recent Russian and Chinese interest in the continent and the need to prevent existing allies from turning to other partners.

He found some support from the dais. Sen. Jack Reed of Rhode Island, the committee’s top Democrat, said that countries in Africa like in South America are “beset by a vicious cycle of challenges that our competitors are seeking to leverage to their benefit. Countries with weak democratic institutions and rampant corruption are being overtly wooed by Chinese and Russian investments and covertly manipulated through information operations and a flood of disinformation.”

Katherine Zimmerman, a resident fellow at the American Enterprise Institute, says Townsend’s command “does a lot on the continent with little,” but that it will likely have to accept more responsibility with fewer resources.

“The shift of U.S. resources from Africa to support great power competition misses, as Gen. Townsend notes, that the continued U.S. engagements in Africa are great-power competition. The U.S. is losing the competition in Africa against China, Russia, al-Qaida, and the Islamic State [group]. It’s not losing militarily, but in the soft-power space,” Zimmerman said in an email.

China has more embassies than the U.S. on the continent and seeks to exert influence by allowing African governments to come into its debt. Russia has increased its presence in the southern Mediterranean and coastlines, Zimmerman said.

“U.S. diplomacy and development dollars would go far in securing American interests in Africa. Yet it cannot win in the soft power competition without the hard power presence because of the very real security concerns,” she said.