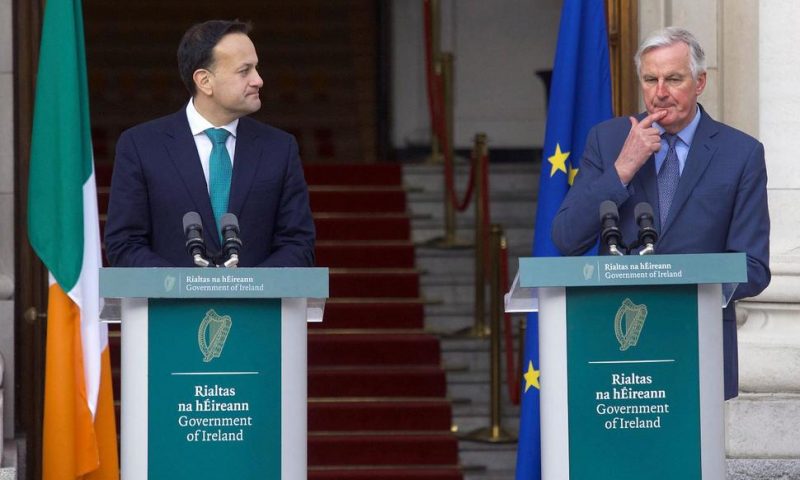 Ireland’s prime minister has warned Britain that Brexit is far from finished.

LONDON — Ireland’s prime minister warned Britain on Monday that Brexit is far from finished — and the European Union will have the stronger hand in upcoming negotiations on future relations between the two sides.

Leo Varadkar said “we’re only at halftime on Brexit,” as the bloc’s chief Brexit negotiator visited Dublin in a show of solidarity, five days before the U.K. is due to leave the EU .

Britain’s exit on Friday, which will be the first time a nation has left the bloc, will be followed by an 11-month transition period in which Britain will continue to follow EU rules while the two sides work out new deals on trade, security and other areas.

“The European Union is a union of 27 member states. The U.K. is only one country,” Varadkar told the BBC before meeting EU Brexit negotiator Michel Barnier. “And we have a population and a market of 450 million people. The U.K., it’s about 60 (million). So if these were two teams up against each other playing football, who do you think has the stronger team?”

Speaking after the meeting, Varadkar added that the negotiations didn’t need to be a contest, and could end in a “mutually beneficial” deal.

British Prime Minister Boris Johnson is adamant that he won’t agree to extend the Brexit transition beyond the end of 2020, even if a deal has not been struck.

Varadkar, however, said it would be difficult to secure a comprehensive agreement in time and there was a chance a deal might need to be approved by parliaments in all 27 EU countries — any of which could hold it up.

“We need to get down to business very quickly trying to get that trade deal, which is absolutely essential for the Irish economy, as well as, of course, for Britain’s as well,” said Varadkar, who is battling to retain his job in an election on Feb. 8.

Ireland is the only EU country to share a land border with the U.K., and Britain is one of Ireland’s top trading partners.

Britain and the EU are committed to striking a wide-ranging free trade agreement but appear to be on a collision course. The U.K. government says it will not agree to follow an EU rule book in return for unfettered trade; the bloc insists there can be no trade deal unless Britain agrees to a “level playing field” and does not undercut EU regulations.

Negotiations are not due to begin in earnest until March, when EU leaders sign off on a mandate for the talks drawn up by Barnier.

Barnier said that if no agreement was reached by the end of the year it “cannot be business as usual.”

“We are to face a risk of a cliff edge, in particular for trade,” he said.

The U.K. government says Brexit will allow Britain to forge new trade deals around the world, though most economists doubt these will make up for lost commerce with the EU, which currently accounts for almost half of U.K. trade.

In a speech at Queen’s University in Belfast, Barnier said that Brexit would inevitably have “negative consequences” for both sides.

“Whatever agreement we reach on our future relationship, Brexit will always be a matter of damage limitation,” he said.