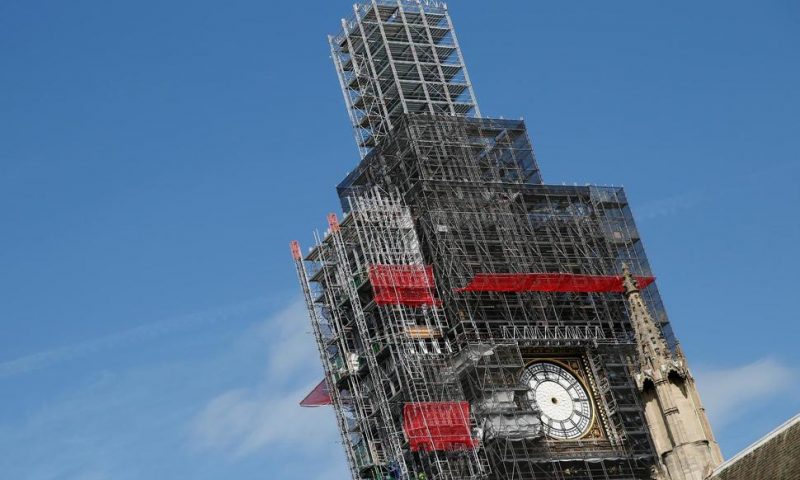 With Britain due to leave the European Union next week, the country is divided over how to mark a historic moment that some are relishing but others are dreading.

LONDON — With Brexit just days away, Britons are fighting over the chimes of Big Ben. And the White Cliffs of Dover are a battleground.

As the United Kingdom prepares to leave the European Union on Friday, people are divided over how to mark a historic moment that some are relishing but others are dreading.

Britain’s 2016 referendum on EU membership split the country: 52% opted to leave the 28-nation bloc, 48% voted to remain. The intervening years of political wrangling over the departure terms have not healed the divide.

For pro-Europeans, departure at 11 p.m. (2300 GMT) Jan. 31 will be the melancholy moment that Britain abandons a project that brought once-warring nations together, created a vast free-trading zone of half a billion people and let Europeans study, work and live across the continent.

For Brexit supporters, it will be the instant the U.K. once again becomes a sovereign nation after 47 years of membership in the bloated, bureaucratic EU club.

“It’s a momentous occasion,” said Brexit Party chairman Richard Tice, who plans to join party leader Nigel Farage and thousands of supporters for a party outside Parliament on Friday night. “It’s a great celebration of the democratic will. And it’s right to celebrate it.”

Organizers are promising music, songs, speeches, a light show and a New Year’s Eve-style countdown in the shadow of Parliament’s clock tower. But, to their chagrin, Brexit probably won’t be marked by the sound of the giant Big Ben bell, whose hourly bongs are a world-famous symbol of British democracy.

Big Ben has been largely silent since 2017 while the clock tower is being repaired, and House of Commons authorities said bringing it back for one night could cost as much as 500,000 pounds ($654,000).

Undaunted, Brexiteers launched a crowdfunding campaign, encouraged by Conservative Prime Minister Boris Johnson, who said “we’re looking at whether the public can fund it.” But Johnson’s Downing Street office quickly distanced itself from the idea, and Commons authorities made it clear they considered it impractical to have Big Ben bong for Brexit.

Tice chided “the bureaucratic blob” for hobbling the plan. But never fear: “We have a Plan B.”

“We will play the sound of Big Ben chiming, that wonderful sound, loudly through our excellent speaker system,” he said. “And in 50 years’ time … this will be the image of the U.K. leaving the European Union (on) 31st January 2020.

“It’ll be a sense of coming together, of pride, of patriotism, of belief in our country.”

“Spending half a million pounds to ring a few bells is just silly. People who want to do it are off their trolley, frankly,” said Tony Greaves, a Liberal Democrat member of the House of Lords.

Greaves warned colleagues this week that many people — especially the more than 3 million citizens of other EU countries who live in Britain — feel a sense of loss “akin to bereavement” about Brexit.

“A lot of people will not be celebrating. They’ll be feeling very sad and very glum,” he said. “People are saying we want to bring the country together now after the division. This is the last possible way to do it.”

A suggestion that church bells should ring, as they did to mark the end of two world wars, also struck a discordant note. The Central Council of Church Bell Ringers stressed that it “does not endorse bell ringing for political reasons.”

Debate also is raging in the English Channel port of Dover, where a pro-EU politician, Liberal Democrat Antony Hook, has raised more than 13,000 pounds ($17,000) to plaster a huge “We still love EU” banner on the famous White Cliffs on Brexit day.

Dover’s pro-Brexit Conservative lawmaker, Natalie Elphicke, has suggested instead a banner proclaiming, “We love the U.K.,” accompanied by a fireworks display that could be seen from France, 32 kilometers (20 miles) away.

Britain’s entry into what was then the European Economic Community at the start of 1973 was marked by similar ambivalence. The country was divided on the issue, and there were quiet demonstrations by activists on both sides, but, at least immediately, no major festivities.

“Britain passed peacefully into Europe at midnight last night without any special celebrations,” The Guardian newspaper reported on Jan. 1, 1973. “It was difficult to tell that anything of importance had occurred.”

Almost half a century on, Johnson’s Conservative government must balance its own enthusiasm for Brexit with the knowledge that half the country opposes the decision to walk away from the EU.

The prime minister is scheduled to make a televised address Friday evening, stressing unity and the healing of divisions. As 11 p.m. approaches, government buildings will be lit up and a countdown clock projected onto the black bricks of the prime minister’s 10 Downing St. residence.

Historian Margaret MacMillan urged the government to avoid a tone of triumphalism. She said if ever there were a time for British understatement, this is it.

“It is not a time for celebration. It is a time for reconciliation,” said MacMillan, a University of Toronto professor whose books include “Dangerous Games: The Uses and Abuses of History.”

“If the prime minister really wanted to be prime ministerial, he could say, ‘Look, we’ve had a long, difficult disagreement, but let’s sit down and be friends again,’ and just have a tea party or something,” she said. “I think low-key is better.”