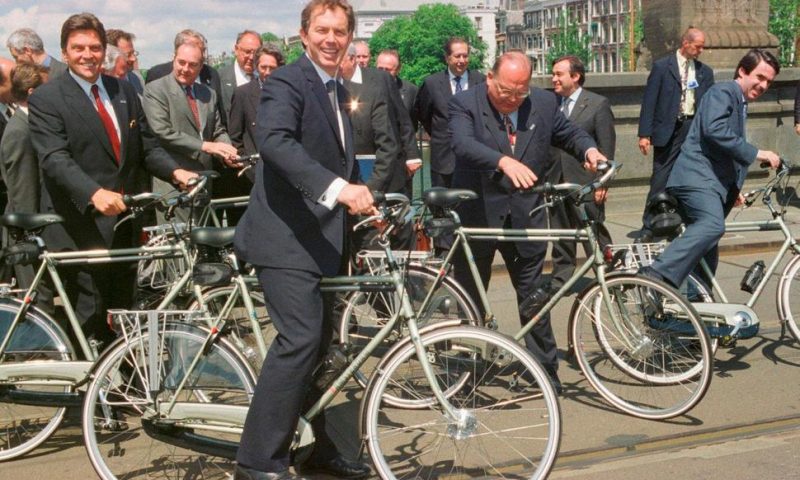 Britain officially leaves the European Union on Jan. 31 after a debilitating political period that has bitterly divided the nation since the 2016 Brexit referendum.

LONDON — Britain officially leaves the European Union on Jan. 31 after a debilitating political period that has bitterly divided the nation since the 2016 Brexit referendum.

Difficult negotiations setting out the new relationship between Britain and its European neighbors will continue throughout 2020.

This series of stories chronicles Britain’s tortured relationship with Europe from the post-World War II years to the present.

By the time Tony Blair had won in a landslide in 1997, he had made the Labour Party decidedly pro-European. Britain, he insisted, would be at the “heart of Europe.”

Euro-enthusiasts like Blair thought, and still do, that Britain is just too small to prosper economically outside the European Union so Britain’s national interest is best-served by being a committed member of the bloc.

The image of the young prime minister on a bike in Amsterdam a few weeks after his election triumph with other European leaders symbolized the new approach, a break with the past.

Blair built bridges initially. He signed up to the EU’s social chapter that his predecessor John Major had negotiated an opt-out from. This incorporated into British law an array of rights such as the equal treatment of men and women and the maximum working week.

All went smoothly for Blair at first and there was a real debate about Britain joining the euro single currency, which had launched relatively smoothly in 1999. He carried a lot of authority, not least because the British economy was in the midst of an unprecedented period of economic growth and peace had been achieved in Northern Ireland through the Good Friday Agreement signed in 1998.

But the Sept. 11 attacks changed everything. Blair’s decision to back the U.S.-led war in Iraq in 2003 put him at odds with French President Jacques Chirac and German Chancellor Gerhard Schroeder. The failure to find weapons of mass destruction, the main pretext behind the war, did untold and lasting damage to Blair.

Plans to join the euro stalled and Blair’s European enthusiasm hit a roadblock. After the Brexit vote in June 2016, European Commission President Jean-Claude Juncker said Blair had to take his share of the blame for failing to make the case strongly enough of the benefits of political union within the EU.

Notwithstanding that view, the cause of Europe hasn’t had as wholehearted a supporter at 10 Downing Street as Blair since his departure in 2007.

For Businesses, Virus in China Fans Fear and Uncertainty

China Deal Might Not Bail Out Lobster Industry This New Year