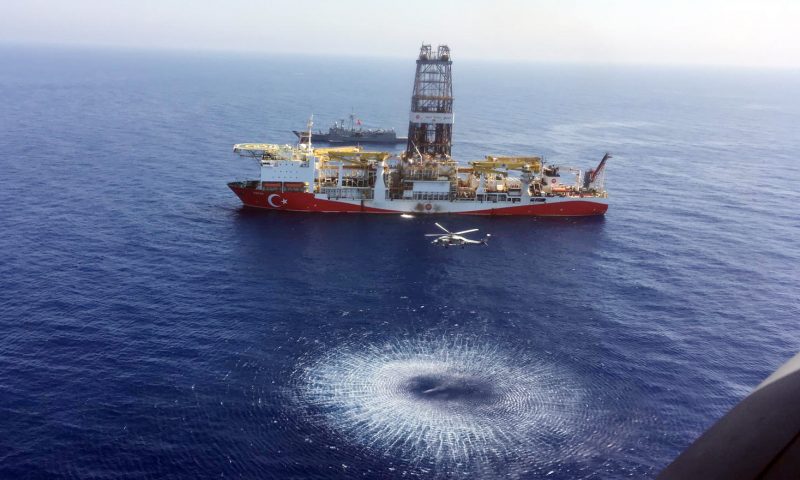 A Cypriot official says Turkey may have stolen technical data that enabled it send a drill ship at a specific location south of Cyprus where energy companies Eni and Total had pre-selected to carry out their own exploratory drilling.

NICOSIA, Cyprus — Turkey may have stolen technical data that enabled it send a drill ship at a specific location south of Cyprus that energy companies Eni and Total had pre-selected to carry out their own exploratory drilling, a Cypriot officials said Wednesday.

Government spokesman Kyriakos Koushos said that although Cypriot authorities don’t have definitive proof, it’s believed that Turkey got its hands on data that helped guide its drill ship to the specific target.

The target is situated in an area, or block, where Cyprus has licensed Italian Eni and Total of France to carry out a hydrocarbons search. The two companies are licensed to conduct exploratory drilling in seven of Cyprus’ 13 blocks that make up its exclusive economic zone.

“There’s information, which is probably correct, that they had stolen plans and studies from a specific company, that’s why they went to the specific spot,” Koushos told Greece’s state broadcaster ERT.

The Cypriot official said he’s not suggesting that either Eni or Total had handed Turkey the data.

Koushos repeated that Turkey continues to flout international law by carrying on with illegal drilling activity in Cypriot waters and accused the country of “gunboat diplomacy.”

“Unfortunately, Turkey has become the pirate state of the east Mediterranean,” he said.

Koushos denied a Turkish claim that it’s in secret negotiations with Eni on a hydrocarbons search in the area.

Cyprus’ Foreign Minister Nikos Christodoulides said Wednesday that the European Union is moving to expedite sanctions against individuals or companies involved in illegal drilling off Cyprus.

Turkey insists it’s acting to protect its interests, and those of breakaway Turkish Cypriots, to the region’s energy reserves. It says part of Cyprus’ economic zone falls within its own continental shelf and that its drilling activities are also part of a deal with Turkish Cypriots.

Cyprus was divided along ethnic lines in 1974 when Turkey invaded following a coup by supporters of union with Greece. A Turkish Cypriot declaration of independence in the island’s northern third is recognized only by Turkey. Cyprus joined the EU in 2004, but only the southern part, seat of the island’s internationally-recognized government, enjoys membership.

Other companies Cyprus has licensed to carry out a hydrocarbons search include ExxonMobil and partner Qatar Petroleum as well as Texas-based Noble Energy and partners Delek of Israel and Dutch Shell.

So far three gas deposits have been discovered off Cyprus’ southern coastline.

Davos: Hopes for Digital Tax Breakthrough Between France, US