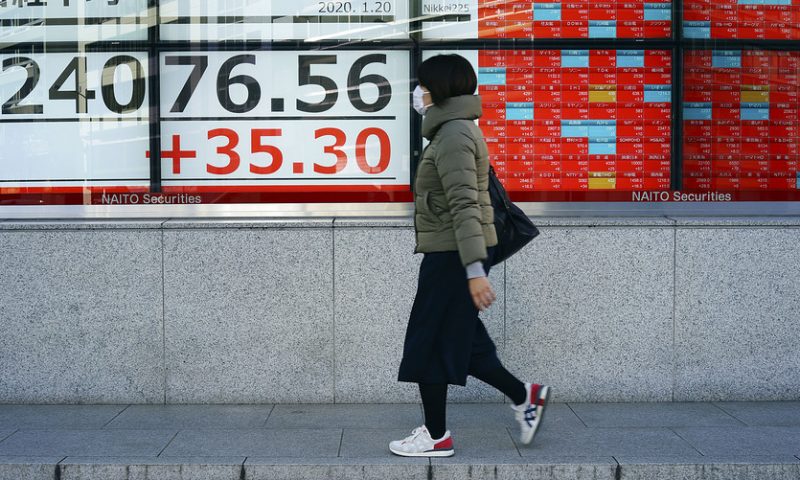 U.S. benchmark stock indexes finished lower on Tuesday, pulling back from records seen last week, after news that the Chinese coronavirus had spread to the U.S. raising fears of a pandemic that might affect global economic growth.

Last week, the Dow, S&P 500 and Nasdaq Composite Index COMP, -0.19% all posted their best weekly gains since Aug. 30, according to FactSet data.

The risk-off mood in Asian equities spilled over onto Wall Street after the U.S. Centers for Disease Control and Prevention announced the first case of the coronavirus within the U.S. The virus’s outbreak in China, which originated in the city of Wuhan, has sickened around 300 people, leaving six dead, according to Chinese state media and health officials.

The World Health Organization was said to be considering declaring an international public health emergency over the virus, as it did with swine flu and Ebola.

“The spreading of the virus in China was part of a number of issues contributing to futures trading lower, but the intraday downturn we see now is more related to reports that [the coronavirus] could be a domestic issue. When you have a market close to all-time highs, it’s vulnerable to any bad news,” Randy Frederick, managing director of Trading & Derivatives at Schwab Center for Financial Research, told MarketWatch.

At the same time, he said such shocks tend to prove short-lived, especially, in a bull market that has seen records across major equity benchmarks in week after week.

Softness in markets Tuesday is being driven “by a combination of fears related to the virus and investor fatigue,” said Brent Schutte, chief investment strategist at Northwestern Mutual Wealth Management Company. “It provides an opportunity for some people to take some profits.”

Also quelling some of last week’s record-setting enthusiasm to start this week were fresh concerns about sluggish economic growth outside of the U.S. and the start of a presidential Senate impeachment trial of President Donald Trump.

On Monday, the International Monetary Fund, or IMF, downgraded its global economic growth forecast from 3.4% to 3.3% for 2020, with the organization projecting that the U.S. economy to grow by 2.0% this year, a cut of 0.1 percentage points compared with the IMF’s October 2019 forecast.

Meanwhile, President Donald Trump’s impeachment trial began in earnest on Tuesday, with Sen. Majority Leader Mitch McConnell submitting a proposalthat could result in a speedy trial and Trump possibly being acquitted of wrongdoing.

Markets have largely dismissed impeachment talk because investors see a low likelihood that Trump will be removed from office following a Senate trial.

For his part, Trump touted the U.S. economy’s strength in a speech in Davos, Switzerland, kicking off an important gathering of business leaders at the World’s Economic Forum. “I’m proud to declare that the U.S. is in the midst of an economic boom the likes of which the world has never seen,” Trump said. “America’s economic turnaround has been nothing short of spectacular.”

He said trade talks with Brussels were going well even as he suggested import duties on European cars were still on the table if an agreement was not struck. He also confirmed France would delay until the end of 2020 a controversial tax on digital services that would impact U.S. tech giants after the Trump administration threatened retaliatory tariffs.

On Friday, U.S. stocks finished at records after December housing starts data that showed home construction rising 16.9%, to annual rate of 1.608 million units, to the fastest pace since 2006.

Shares of Boeing Co. BA, -3.33%, the biggest contributor to the Dow Jones Industrial Average, fell 3.3% Tuesday after it reported that its grounded 737 Max jets may not be approved for return to service until mid-2020. The embattled aerospace company is also in talks to “secure a loan of $10 billion or more,” according to a report by CNBC. The company faces rising costs related to the aftermath of two fatal crashes of its 737 Max airplanes.

Reynolds Consumer Products REYN, +0.00% set terms of its initial public offering Tuesday, to raise up to $1.32 billion and to value the consumer products company at up to $5.07 billion.

Shares of Uber Technologies Inc. UBER, +7.03% gained 7.03% after the company said it had completed the sale of its Indian food delivery business to Zomato that valued the company at $355 million.

Netflix investors need to get used to the new normal

Stocks in Asia rise, mostly shrug off concerns over coronavirus