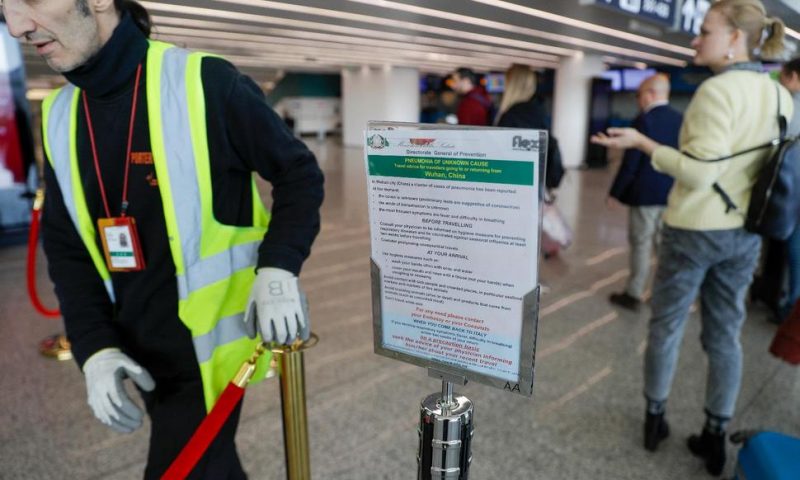 Shares of U.S. airlines that fly to China are down on growing fear about a virus outbreak in that country.

Shares of the three U.S. airlines that fly to China fell on Tuesday as fear grew about a virus that authorities say has killed six people and sickened 300 more.

The United States reported its first case, a Washington state resident who returned last week from China and was hospitalized in good condition.

Investors worried that the virus could spread beyond Asia, like the SARS outbreak in 2002, which hurt travel between the U.S. and Asia.

Other stocks in the travel sector also took a hit Tuesday, including hotel chains like Marriott, which fell 4%. Hilton was down 2.8% and Wyndham slipped 1.3%. Meanwhile, Royal Caribbean Cruises slid 4.3%.

“We’re obviously watching it carefully, it’s still way too early to talk about,” Marriott CEO Arne Sorenson told CNBC Tuesday. “I think the Chinese authorities have got to make sure they understand what’s going on and we’ll have to watch and see what we learn from it.”

The outbreak is believed to have started in Wuhan in central China. None of the U.S. airlines fly to Wuhan, but their Chinese partner airlines do, and some passengers transfer from Chinese carriers to American ones.

Fear about the virus increased just as millions of Chinese prepared to travel for the lunar New Year holiday, which starts Saturday. Cases have also been confirmed in Japan, South Korea and Thailand.

Last week, U.S. health officials began screening passengers from Wuhan at New York’s Kennedy airport, Los Angeles International and the San Francisco airport. Officials say they will expand the screening to Chicago’s O’Hare and the Atlanta’s airport, and require all U.S.-bound travelers who begin their trips in Wuhan to go to one of those five airports.

“There is a legitimate threat to travel,” said Henry Harteveldt, a travel industry analyst in San Francisco. “It’s small now, but with the potential to become much larger with just some innocuous event such as an undetected passenger getting through (health) screening at an arrival airport like San Francisco International, Kennedy or LAX.”

Harteveldt said the situation also could become worse for airlines if companies start to restrict travel to China.

Some of the airline stocks recovered lost ground as the day went on. Delta fell 5.8% before regaining some of the loss.

“Delta being down 5% seems to be an overreaction,” said Joseph DeNardi, an airline analyst for Stifel Nicolaus. “I don’t think Delta’s business is worth 5% less knowing what we know now.”

In 2002 and 2003, while U.S. airlines were still reeling from the 9/11 terror attacks, the SARS outbreak hurt their international business. Harteveldt recalled a trip he made back then to Tokyo.

“Health workers in hazmat suits came on board and took people’s temperatures before they could disembark,” he said. “It was quite frightening.”

Chinese authorities confirmed that the virus can spread from one person to another, not just from animals to humans.

So far, however, the virus appears to be less dangerous and infectious than SARS, which also started in China and killed more than 700 people.