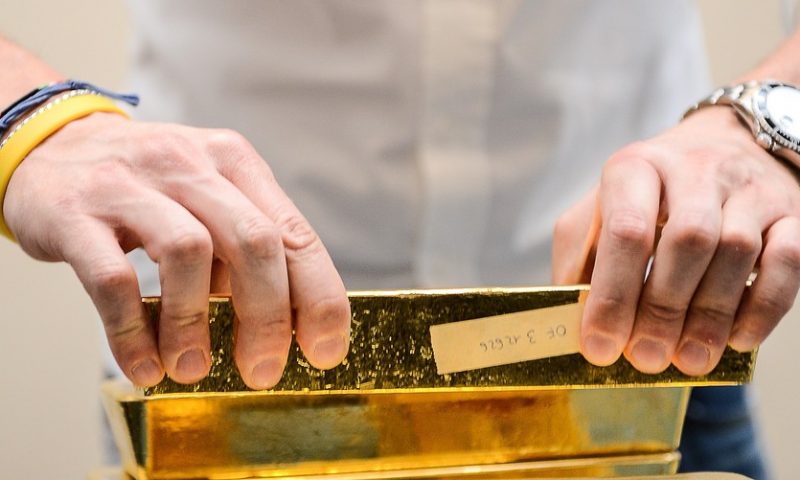 Prices also declined on the back of further gains in U.S. benchmark stock indexes, which followed the completion Wednesday of the first stage in a trade pact between the U.S. and China and the Senate approval of the U.S.-Mexico-Canada trade agreement on Thursday.

“Gold prices gave up their earlier gains following a wrath of positive US economic data,” said Edward Moya, senior market analyst at Oanda, in a market update. “This week has not been good for macro-economic traders looking to make a bullish case for gold prices.”

The Philadelphia Fed said Thursday its gauge of business activity in its region surged in January. New jobless claims fell for the fifth week in a row and retail sales increased 0.3% last month, the government said Thursday. Meanwhile, the National Association of Home Builders’ monthly confidence index dropped one point to 75 in January from 76 the month prior.

Despite the mostly upbeat economic data, “the longer-term bullish trend for gold has been supported on central bank demand, geopolitical risks, trade tensions and a falling dollar,” said Moya.

The move for gold comes as the Dow Jones Industrial Average DJIA, +0.14% broke through a 1000-point milestone at 29,000 recently representing a record run for the broader stock market that has been at least partially fueled by Wednesday’s signing of the initial part of multi-level trade agreement between the U.S. and China.

Commodities experts, however, say that gold has found some support from a weaker U.S. dollar and benchmark government bond yields which look to end the week lower, providing a runway for gold to produce a modest rise above a level at $1,550 considered support for the yellow metal.

“The recovery to this threshold is positive for gold, as it’s showing a healthy appetite for bullion, despite the general risk-on scenario which has followed the signing of the Phase One deal between US and China,” wrote Carlo Alberto De Casa, chief analyst at ActivTrades in a daily research note.

Following the Phase 1 deal, the major focus is now on the World Economic Forum in Davos “and what [President] Donald Trump has to say about his next plan towards China,” said Naeem Aslam, chief market analyst at AvaTrade. “We expect some flashing headlines from Davos next week and this could increase the volatility for gold.”

“Overall, we still hold a bullish view on gold and any retracement in the gold price could be an opportunity,” he added.

Investors are also betting that the Federal Reserve will keep federal-funds rates anchored at a 1.75%-2% range in 2020, which also may offer more reason for gold and other precious metals, which don’t bear a yield, to advance. Expectations for lower rates for a longer period, also have boosted the equity markets, resulting in a tandem runup for stocks and gold, which usually move in opposite directions.

“The rocket ship palladium price goes ever higher breaking price record after record,” R. Michael Jones, chief executive offer of Platinum Group Metals Ltd. PLG, +5.31% told MarketWatch. “If you want to build a car you have to have the stuff.”

“At 0.15 ounces per car roughly for every 100 cars off the line about 15 ounces are needed,” he said. So a $1000 move up in palladium is about $150 extra cost per car – it is not enough to stop the car being made and bought. Clean air standards are not going to be relaxed because it costs $150 more for a modern car.”

Disney heiress slams the company her grandfather co-founded, says workers are at risk of ‘a death spiral’

US Housing Construction Jumps 16.9% in December