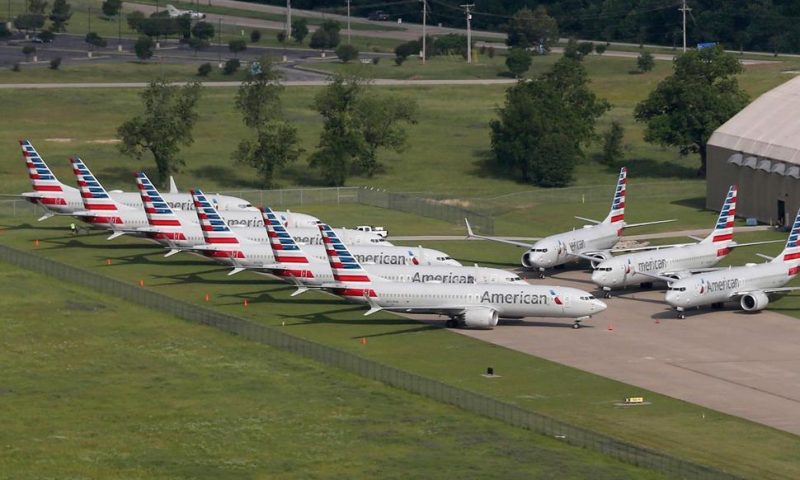 American Airlines says it’s talking to Boeing about compensation for grounded planes and will share some of the proceeds with airline employees.

FORT WORTH, Texas — American Airlines said Thursday it is negotiating with Boeing Co. over compensation for the airline’s grounded planes and expects to share some of the proceeds with employees.

American had 24 Boeing 737 Max jets when the planes were grounded worldwide in March after two deadly crashes. Like other airlines, American has canceled thousands of flights as a result. It estimated that the grounding will cut its full-year 2019 pretax income by $540 million.

A spokesman for American said Thursday that the airline is talking to Boeing “as to what that compensation looks like.” Boeing has suggested that compensation could be in cash or other forms, such as help with training or spare parts.

American expects to make part of the compensation eligible for employee profit sharing, the spokesman said without providing any figures.

American Airlines Group Inc. CEO Doug Parker said in October he was confident that any losses due to the Max grounding “won’t be incurred by American shareholders, but will be borne by the Boeing shareholders.”

Pilots and flight attendants have lost wages because of canceled flights. Pilots at American have let their airline deal with Boeing, but pilots at Southwest Airlines have taken a different course — their union is suing Boeing for lost wages.

Boeing has reached partial settlements with Southwest and Turkish Airlines — neither carrier disclosed details — while continuing to negotiate with others. Chicago-based Boeing has estimated the eventual cost to reach $5.6 billion over several years, although many analysts believe that figure will go much higher.

Meanwhile, it remains unclear when the Max will fly again. Boeing is still working on software and computer updates to prevent a repeat of crashes in Indonesia and Ethiopia that killed 346 people. In both crashes, a key sensor malfunctioned and triggered an automated system to push the nose of the plane down, according to accident investigators.

The Federal Aviation Administration would have to approve Boeing’s changes to the Max before the planes can fly in the U.S. Regulators in other countries plan to conduct their own reviews.