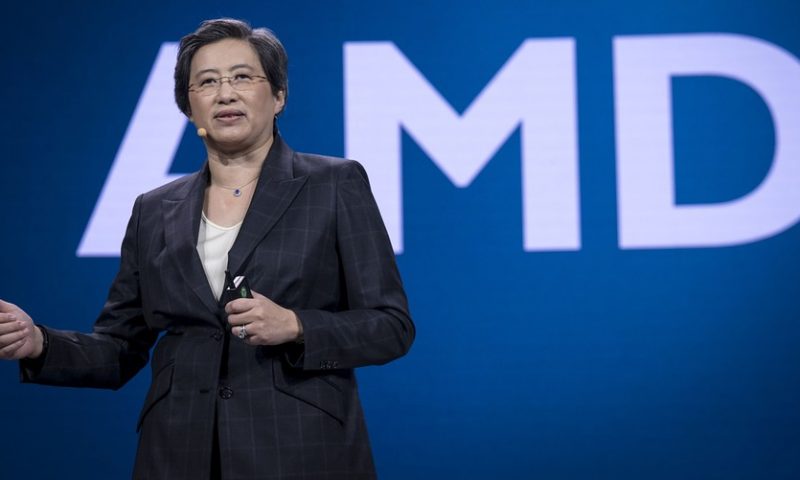 For the semiconductor industry, 2019 was the best of years and the worst of years all in one: Chip-related stocks turned in their best performance in a decade, while sales declined at a rate not seen since the last economic downturn.

The PHLX Semiconductor Index SOX, +0.28% increased 60.1% in 2019, its strongest performance since 2009, when the index rallied nearly 70%. That move came despite large earnings and revenue declines for most chip companies — the Semiconductor Industry Association recently predicted a 12.8% decline in sales for the year, which would be the worst decline since the economic nadir of 2009.

So why that disparity? Well, analysts say that 2018’s record year of sales was fueled by buyers building up huge inventories to get ahead of potential China tariffs and prices in memory chips that had been on the rise. Now, as those inventories have been used up and trade-war fears have lessened, 2020 is expected to pick up where 2018 left off — with expectations that most consumer products will be “smart” thanks to a chip, or many, inside.

“People are trying to put intelligence down into the smallest things,” said Maribel Lopez, principal analyst at Lopez Research, in an interview. “Everybody had a good run of it and I think that run is going to continue into 2020 because the need for intelligent hardware is not changing, it’s only expanding.

“So all up and down the stack, from the smallest gizmos to the most high-performance-style computer architectures, I think we’re going to see another great year for chips,” Lopez said.

There have been doubts throughout the year from investment analysts, but more optimistic outlooks near the end of the year seemed to sway sentiment. Even Morgan Stanley recanted its bearish view of the sector, saying it was “clearly wrong” given the sector’s stock performance in 2019.

“Sure, we see strong secular growth in content centered around AI and autos, but would also call attention to markets like consumer and PCs that are declining and smartphones ex-growth longer term despite a reprieve expected with 5G the next two years,” Morgan Stanley analyst Joseph Moore said.

AMD’s optimism remained fairly constant in 2019 and appears to continue into 2020. At the beginning of 2019, AMD was the only major chip company showing any optimism, mostly because the year signalled the rollout of its 7-nanometer products meant to further sap share from Intel, which has yet to roll out its next-generation 10-nanometer chips. In chip parlance, nanometers, or nm, refers to the size of the transistors that go on a computer chip, with the general rule being that smaller transistors are faster and more efficient in using power.

But even as chip makers such as Texas Instruments Inc. TXN, +0.49% and Xilinx Inc. XLNX, +0.09% have not returned to optimism, major players like Intel and Nvidia have. Intel, in its last earnings report, reported what it called the best quarter in its history and forecast meaningful AI and data-center growth.

Meanwhile, Nvidia forecast a return to revenue growth after four quarters of declines and improving margins in the wake of a crypto-influenced gain in 2018 that led to an inventory glut of its graphics chips. Jefferies analyst Mark Lipacis, who has a buy rating on Nvidia, said the company is entering a second phase of data-center growth with conversational AI and natural-language processing, as well as holding a dominant position in gaming.

“We continue to believe Nvidia has created a moat with its platform and ecosystem, and expect it to remain the dominant beneficiary from AI proliferation,” Lipacis said.

Micron and the calling of the memory bottom

Speaking of inventory gluts, Micron’s stock is creeping its way back to where it was more than a year ago, now that the company is calling a bottom to its financial woes.

Deutsche Bank analyst Sidney Ho said returning memory-chip demand offset the company’s other challenges ahead. “While Micron is still facing multiple headwinds, including still not being able to ship some products to Huawei and under-utilization charges, we believe the improving market outlook in both DRAM and NAND should more than offset these barriers,” Ho said.

DRAM, or dynamic random access memory, is the type of memory commonly used in PCs and servers, while NAND chips are the flash memory chips used in USB drives and smaller devices such as digital cameras.

“We are seeing the first signs of improving DRAM pricing as spot pricing is lifting and certain market participants expect contract pricing for server DRAM will improve in January — a shift we attribute to better hyperscale demand,” Wedbush analyst Matt Bryson said.

“Demand for both NAND and DRAM should accelerate through the course of 2020,” Bryson said. “There are numerous product cycles in place driving additional demand, including: 5G handset rollouts, new gaming consoles, as well as improving hyperscale server spend.”

Even as the stocks of chip-equipment makers Lam Research and KLA rank as the second- and third-best performing on the S&P 500 for the year, Evercore ISI analyst C.J. Muse sees all sorts of bullish signals ahead and maintains his “all-in” outlook for the sector.

In a note, Muse said that key drivers include investments in making even smaller chip architectures at contract chip fabricator Taiwan Semiconductor Manufacturing Co. TSM, +0.43%, more aggressive spending at Samsung Electronics Co. 005930, -0.90% for logic chips along with a faster-than-expected return of spending on flash memory, Intel playing catch-up to bring out its 10-nanometer chips, and domestic investments in China on the rise again.

In its last earnings report, KLA’s results and forecast topped Wall Street forecasts while adjusted earnings increased slightly year-over-year, after declines in each of the previous two quarters. Similarly, Lam’s results also topped Wall Street expectations for the quarter, while the company forecast a revenue outlook that could snap a five-quarter streak of year-over-year revenue declines.

Consumers confident in the economy at the end of 2019, but don’t expect faster growth