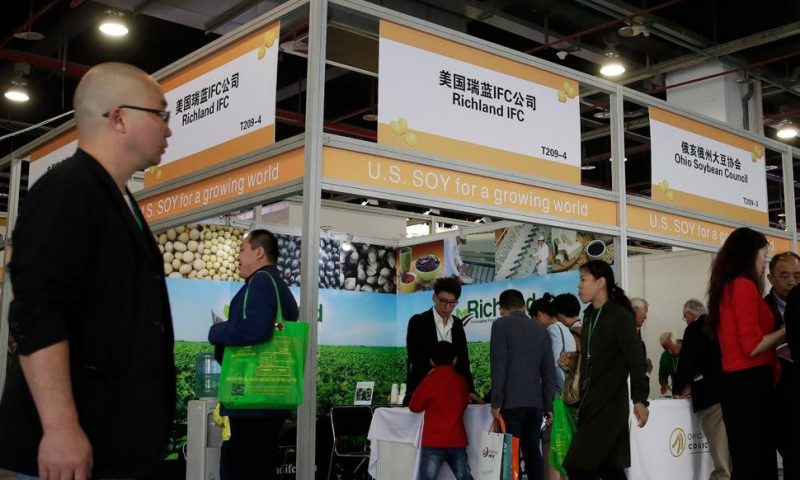 President Donald Trump likes to joke that America’s farmers have a nice problem on their hands: They’re going to need bigger tractors to keep up with surging Chinese demand for their soybeans and other agricultural goods under a preliminary deal between the world’s two largest economies.

OMAHA, Neb. — President Donald Trump likes to joke that America’s farmers have a nice problem on their hands: They’re going to need bigger tractors to keep up with surging Chinese demand for their soybeans and other agricultural goods under a preliminary deal between the world’s two largest economies.

But will they really?

From Beijing to America’s farm belt, skeptics are questioning just how much China has actually committed to buy — and whether U.S. farmers would be able anytime soon to export goods there in the outsize quantity that Trump has promised.

It amounts to $40 billion a year, according to Trump’s trade representative, Robert Lighthizer. If you ask the exuberant president himself, though, the total is actually “much more than’’ $50 billion. To put that in perspective, U.S. farm exports to China have never topped $26 billion in any one year.

What’s more, since Trump’s trade war with Beijing erupted last year, China has increased its farm purchases from Brazil, Argentina and other countries. As a result, Beijing may now be locked into contracts it couldn’t break even if it intended to quickly increase its purchases of American agricultural goods to something approximating $40 billion.

“History has never been even close to that level,” said Chad Hart, an agricultural economist at Iowa State University. “There’s no clear path to get us there in one year.”

“The figure of $40 billion,” added Cui Fan, a trade specialist at the University of International Business and Economics in Beijing, “is larger than I expected, and I wonder whether the United States can ensure the full supply of the products.”

America’s farmers would surely like to. The farm belt has endured much of the impact from Beijing’s retaliatory tariffs since July 2018, when the Trump administration imposed taxes on $360 billion in Chinese imports. Beijing struck back by taxing $120 billion in U.S. exports, including soybeans and other farm goods that are vital to many of Trump’s supporters in rural America.

The impact from China’s retaliatory tariffs was substantial: U.S. farm exports to China, which hit a record $25.9 billion in 2012, plummeted last year to $9.1 billion. Soybean exports to China fell even more — to a 12-year low of $3.1 billion, according to the Department of Agriculture. (Farm imports to China have rebounded somewhat this year but remain well below pre-trade-war levels.)

The so-called Phase 1 deal that the two sides announced Dec. 13 did manage to de-escalate the standoff and offer at least a respite to American farmers. Yet the truce put off for future negotiations the toughest and most complex issue at the heart of the trade war: The Trump administration’s assertion that Beijing cheats in its drive to achieve global supremacy in such advanced technologies as driver-less cars and artificial intelligence.

The administration alleges — and independent analysts generally agree — that China steals technology, forces foreign companies to hand over trade secrets, unfairly subsidizes its own firms and throws up bureaucratic hurdles for foreign rivals. Beijing has rejected the accusations and contended that the administration is instead trying to suppress a rising competitor in international trade.

Under the preliminary U.S.-China deal, Trump suspended his plan to impose new tariffs and reduced some existing taxes on Chinese imports. In return, Lighthizer said, China agreed to buy $40 billion a year in U.S. farm exports over two years, among other things. (Beijing also committed to ending its long-standing practice of pressuring foreign companies to hand over their technology as a condition of gaining access to the Chinese market.)

Many farmers say they’re hopeful but restrained in their expectations.

“At this point, we have to wait to see more details,” said Jeff Jorgensen, who farms about 3,000 acres in southwest Iowa.

Yet the Trump administration has released no text of the agreement. And a fact sheet that Lighthizer’s office issued didn’t specify the target for increased Chinese farm purchases. What’s more, Beijing has so far declined to confirm the $40 billion figure.

“After the agreement is officially signed, the contents of the agreement will be announced to the public,” said Gao Feng, a spokesman for the Commerce Ministry,

Still, Chinese imports of U.S. soybeans more than doubled in November after the Phase 1 agreement was initially announced in mid-October — a sign that reduced tensions might have begun to ease the strain on American farmers, according to AWeb.com, a news website that serves China’s farming industry.

Beijing insists, though, that its farm purchases will be based on consumer demand and market prices, pointedly implying that it won’t buy more than it needs just to satisfy the Trump administration’s promises.

“The purchases should be based on market principles,” said Tu Xinquan, director of the China Institute for WTO Studies in Beijing. “The United States should compete with other countries through price and quality.”

Some analysts suggest that it’s at least theoretically possible for the U.S. to boost its farm exports to China to something close to the figures the administration has promised. Flora Zhu, associate director of China corporate research at Fitch Ratings, calls the $40 billion “achievable.’’

She notes, for example, that China’s demand for soybeans amounts to $40 billion a year. Even before the trade war, the U.S. supplied about a third of that total — “suggesting, Zhu said, that “there is still large room for China to increase its purchases of soybeans from the U.S.”

In addition, China’s demand for imported pork has intensified because its own pig herds have been decimated by an outbreak of African swine fever. Yet that same outbreak could reduce China’s need for American soybeans: Fewer hogs could mean less demand for soybeans and other sources of feed.

But achieving $40 billion a year would likely require diverting market share away from other countries — Argentina, Australia, Brazil, Canada, New Zealand — that export sizable quantities of farm goods to China. Those nations could then argue to the World Trade Organization that they are losing exports not because they can’t compete but because China is being coerced into buying American to avoid Trump’s tariffs.

“It is a situation many countries are concerned about,’’ said Tu of the WTO studies institute in Beijing.

U.S. farmers sound wary. Some worry that the prolonged trade war will brand the United States an unreliable trade partner in China and jeopardize access to a vast Chinese market that had increased its purchases of U.S. farm products from less than $1 billion a year in the early 1990s to nearly $26 billion by 2012. U.S. farm exports to China then fluctuated between about $20 billion to $25 billion a year before Trump’s trade war erupted in earnest last year.

Farmers have watched with frustration as breakthroughs in the trade war appeared several times to have been achieved only to collapse soon thereafter.

“I think it’s a lot of false promises again,” said Bob Kuylen, who grows wheat and sunflowers and raises cattle near South Heart, North Dakota. “I’d love to see $50 billion, but I don’t think it will ever happen … It’s just almost an impossible thing, so why even say it?”