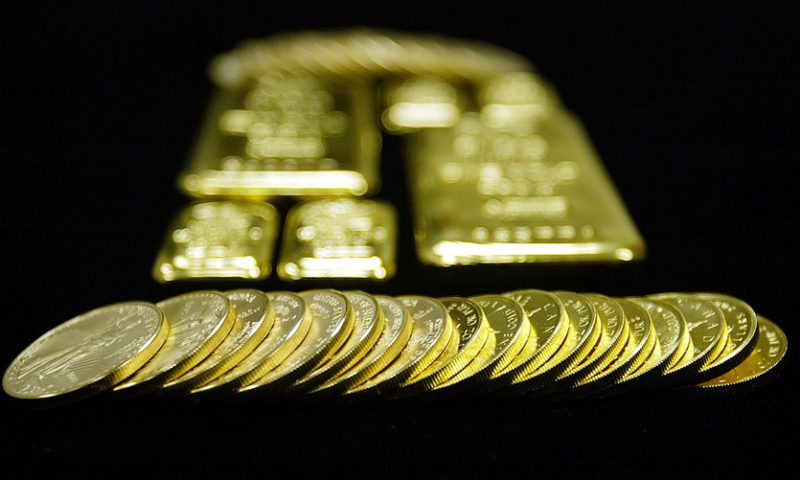 Gold prices settled higher on Monday to begin a shortened week of holiday trade, with the precious commodity punching above a level of technical resistance that could signify further gains ahead, strategists say.

“Indeed, gold has broken above the pivotal $1480/81 level today, which means the path of least resistance is now to the upside again,” wrote Fawad Razaqzada, technical analyst at Forex.com, in a Monday research report.

A string of upbeat economic data in December has fueled optimism that the U.S. economy may be able to extend its record expansion well into 2020. But new data out Monday also showed that U.S. durable goods sank 2% in November, their biggest decline since May, a reminder that while consumer spending is driving U.S. growth, manufacturing continues to be under pressure.

“In economic news, the week’s most anticipated released, the durable goods report missed across the board, with especially the unchanged level of core orders disappointing analysts,” wrote Ken Berman, a strategist at Gorilla Trades, in a midday note Monday.

Still, upbeat tones on U.S.-China trade were propelling U.S. stocks higher Monday, putting them on track for another round of all-time records.

Gold is up 16.3% so far this year, based on the most-active contract, while silver prices have climbed 12.7% thus far in 2019, according to FactSet data.

“This has happened in the last several years,” said Craig Hemke, creator and producer of TF Metals Report, in an interview with MarketWatch, of Gold’s rally from Christmas to the New Year’s holiday.

Gold and silver have made unusual moves of late, rising in tandem as the Dow Jones Industrial Average DJIA, -0.13% and the S&P 500 index SPX, -0.02% have climbed to all-time highs. Rallying equities tend to signify heightened appetite for assets considered risky, which can undercut demand for haven metals.

Equity benchmarks have been on a steady, nearly unimpeded rise to close out 2019 as the Federal Reserve has delivered easier monetary policy and as the U.S. and China have made apparent progress toward ending a more than yearlong trade disagreement.

Both developments, however, could provide a lift for the yellow metal even if it also boosts equities because easing trade tensions between the world’s largest economies can mean increased demand for bullion and sliver.

“With China being one of if not the largest gold consumer, this implies increased demand from this important market, especially ahead of the Lunar New Year when gift jewelry purchases tend to rise” wrote Razaqzada.

Moreover, stimulus from the world’s central banks also has helped to keep rates lower and provide a floor for prices of precious metals.

Still, some investors see gold’s steady values as a sign of some hesitation for investors hedging their risk and repositioning their portfolios heading to the New Year.

“While part of that may be year-end flows and rebalancing by major funds, it could also be a sign that investors are hedging some of their risk exposure, nervous that next year may be just as turbulent as this one amid a fragile trade truce and US election uncertainty,” wrote Marios Hadjikyriacos, investment analyst at XM.com.

President of Dubai-Based Carrier Emirates to Retire in June