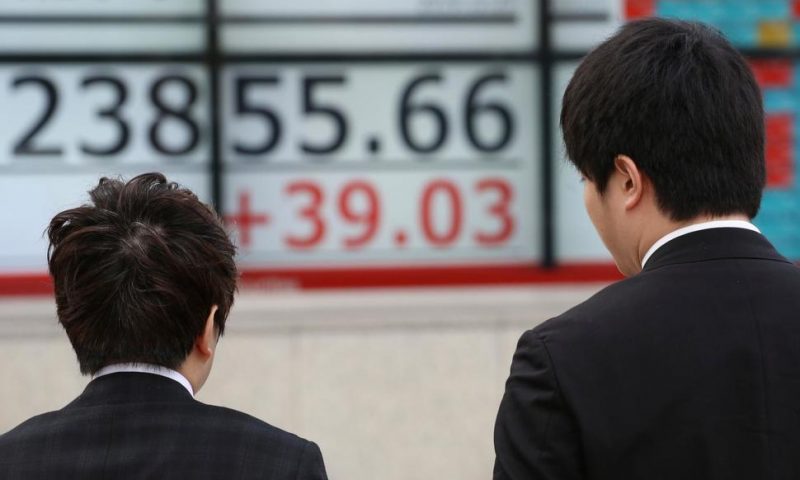 Shares are opening higher on Wall Street in quiet trading ahead of the Christmas holiday in many markets.

NEW YORK — SHARES are opening higher on Wall Street in quiet trading ahead of the Christmas holiday in many markets. Benchmark indexes extended the market’s record-setting run. Shares of Boeing jumped after it said its CEO was resigning immediately as the crisis related to its marquee 737 Max aircraft drags on. Shares in Apache Corp. soared after it announced a joint venture to develop an oil field in Suriname. The S&P 500 rose 2 points or 0.1% to 3,223.88. The Dow Jones Industrial Average gained 92 points, or 0.3%, to 28,548. The Nasdaq is up 17 points, or 0.2%, to 8,941. Bond prices were unchanged. The yield on the 10-year Treasury held steady at 1.91%.

Shares were mostly lower Monday in quiet trading ahead of Christmas holidays for many markets.

Alarm over the possibility of a North Korean missile test was leavened by signs of further progress in cooling trade tensions between Washington and Beijing as China announced plans to further open its financial markets to private business.

Risks have been alleviated but not vanquished, Mizuho Bank noted in a commentary that pointed to Britain’s planned exit from the European Union, the U.S. political situation and a recent cooling of trade friction between Washington and Beijing as potential wild cards.

Concern rose after North Korea said its leader Kim Jong Un had convened a key ruling party meeting to decide on steps to bolster the country’s military capability. The meeting came amid speculation that the North could abandon diplomacy with the U.S. and launch either a long-range missile or a satellite-carrying rocket if Washington doesn’t accept its demand for new incentives to salvage faltering nuclear negotiations by year’s end.

Meanwhile, leaders of China, Japan and South Korea are holding a trilateral summit in the Chinese city of Chengdu this week amid feuds over trade, military maneuverings and historical animosities.

Economic cooperation and the North Korean nuclear threat are the main issues binding the Northeast Asian troika. While no major breakthroughs are expected at the meetings, the opportunity for face-to-face discussions between the sometimes-mutual antagonists is alone considered significant.

China’s State Council offered broad promises to open up its oil, telecoms and power markets wider to private competition in an announcement Monday that included exhortations to private businesses to “ardently love the people and the Communist Party” and to “enthusiastically support socialist values.”

The Cabinet also promised to give private companies equal treatment with state-owned enterprises in more industries. But its statement gave no indication whether the changes would apply equally to foreign companies. The latest promise adds to a string of market-opening measures and tariff cuts meant to help revive economic growth that slowed to a three-decade low in the latest quarter.

Rising optimism around a “Phase 1” trade deal announced a week ago between the United States and China has helped push stock indexes to records. Fears about a possible recession have also faded since the summer after the Federal Reserve cut interest rates three times, and the central bank appears set to keep them low for a long time.

Asia’s calm start to the week followed a strong performance Friday on Wall Street, where technology and health care stocks helped push indexes to further record highs. The S&P 500 notched its 10th winning week in the last 11, finishing with a record high for the fourth time last week. The Dow Jones Industrial Average and Nasdaq composite also ended the week at new highs.

Stocks have traditionally climbed in the last five days of each calendar year, plus the first two of the new year. It’s happened often enough that traders call it the “Santa rally,” and it’s brought an average gain of 1.3% for the S&P 500 since 1969, according to the Stock Trader’s Almanac.

Benchmark crude oil fell 31 cents to $60.13 a barrel in electronic trading on the New York Mercantile Exchange. It lost 74 cents to settle at $60.44 a barrel on Friday. Brent crude oil, the international standard, slid 29 cents to $64.91 per barrel.

Saudi Arabia Cuts Loose With Bevy of Models and a Rave