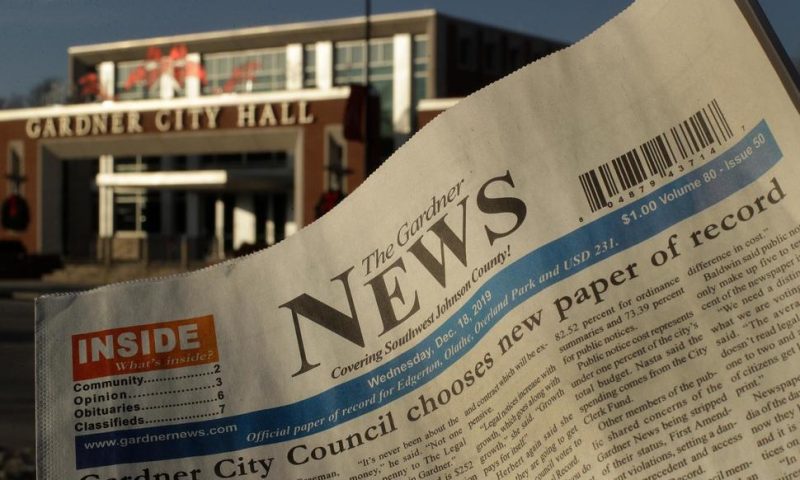 A growing community near Kansas City has decided this week to stop publishing its legal notices in its hometown newspaper.

TOPEKA, Kan. — A growing community near Kansas City has decided to stop publishing its legal notices in its hometown newspaper, describing the move as cost cutting but doing it after several officials criticized the coverage the city was receiving.

The City Council in Gardner, Kansas, changed its newspaper of record following a staff report that the city would likely lower its costs 75% by going with another weekly publication. The Gardner News, which was the paper of record for at least three decades, stands to lose thousands of dollars a year.

The dispute comes as local newspapers are facing financial pressure as they struggle to deal with both readers and advertisers moving online. The industry has largely held onto the business of printing legal notices even though state lawmakers, including in Kansas, face proposals to allow local governments to save money by publishing them only online.

Some see something more troubling in the Gardner City Council’s move, made just weeks after the mayor and a council member accused The Gardner News of publishing inaccurate material, tying up city’s staff to answer it and obstructing city business. They also note that the print circulation for the new paper of record, The Legal News, is in nearby communities, not Gardner, where it is circulated only online.

“They want to put me out of business,” longtime Gardner News Publisher Rhonda Humble said. “They want to shut me up.”

The mayor and council members who supported the change — the council split 3-2 on Monday over the decision — said they could not ignore the potential cost savings: at least $48,000 over the next five years.

“The decision was based on a cost differential and nothing more,” Mayor Steve Shute said in an email, adding that it was trying to publish legal notices “in the most fiscally responsible manner.”

City officials say they’re not concerned that the legal notices will be less accessible because residents can find them online and that printed copies will be made available at City Hall.

The dispute might end up being settled in court; Humble said she’s “exploring litigation.”

Even The Legal News’ publisher, John Lewis, has misgivings about picking up Gardner’s business.

“We continue to believe that the city should publish in the in-town newspaper,” Lewis said in an email. “This is a dispute between the city of Gardner and The Gardner News. I do wish they would learn to get along.”

Richard Karpel, executive director of the Public Notice Resource Center, said he hears of a dispute over local public notices somewhere in the U.S. about once every six months. Karpel’s group, based in Carson City, Nevada, advocates keeping public notices printed in newspapers.

“Usually, they get upset at the coverage, the newspaper coverage, and move it, or try to move it, to another paper,” he said. “In some cases, they’re challenged in court, and generally, you can’t make those kinds of decisions based on content.”

Gardner’s city attorney told council members that they had to base their decision on cost. Shute said in an email before the decision that, “We value the role of the local paper” and encourage it to continue covering the community.

But the relationship has been contentious for months. Last month, Humble filed a formal protest with the city over an annexation decision, arguing that the summary legal notice it filed was not the complete publication required by state law. The paper followed up with a survey to council members, asking them how they would preserve transparency.

City officials have said they complied with state law. Council Member Rich Melton, another supporter of the switch, said during a November meeting that criticism of the city’s staff was “below the belt.” Shute said when a news organization makes “false claims and allegations” that obstruct city business, “It needs to be addressed in some way.”

For some residents, such comments were an obvious red flag. One of them, Heath Freeman, called the move “vindictive.”

“A city should not retaliate in such a way,” Freeman said. “We’re deciding this because we don’t like the content.”