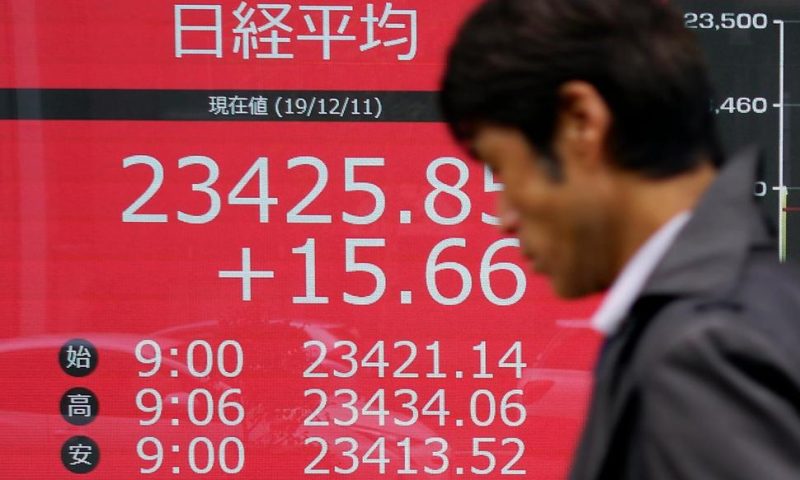 Global stock markets are mixed on news reports that US President Donald Trump might delay a tariff hike on Chinese goods.

BEIJING — Global markets were mixed Wednesday following reports that President Donald Trump’s advisers were preparing for a possible delay in a weekend tariff hike on Chinese goods. Investors also had their eyes on central bank meetings in Europe and the U.S.

The German index in Frankfurt rose in early trading while Shanghai and Hong Kong closed higher. Markets in London and Tokyo declined while Wall Street futures were subdued.

Investors were counting on Trump to postpone Sunday’s duty increase on $160 billion of Chinese imports. But with no official action, Wall Street fell for a second day Tuesday.

The Wall Street Journal and other outlets reported Trump’s advisers were preparing to postpone punitive duties on smartphones, laptop computers, toys and other goods. But they said the president had yet to decide.

“Markets hope that the tariff can is kicked down the road while talks are underway,” said Vishnu Varathan of Mizuho Bank in a report. However, he warned, such hopes are “tentative if not fragile” with no commitment from Trump.

Premarket trading was uneven on Wall Street, with futures for the benchmark Standard & Poor’s 500 index up slightly at 3,137, while futures for the Dow Jones Industrial Average inched down 0.1% to 27,896. Both declined 0.1% on Tuesday.

Investors are looking ahead to the U.S. Federal Reserve’s decision Wednesday on interest rates and a similar decision Thursday by the European Central Bank.

Both are expected to affirm a commitment to low rates to support economic growth.

Elsewhere, markets are watching Britain’s parliamentary election Thursday. Prime Minister Boris Johnson called the election two years before it was required in hopes of a gaining a majority in the House of Commons to support his plan to leave the European Union by the end of January whether or not the two sides have negotiated details of their future relations.

The biggest risk for stocks has been the U.S.-Chinese tariff fight over Beijing’s technology ambitions and trade surplus. It has weighed on global commerce and threatens to depress economic growth.

On Tuesday, Democrats in the U.S. House of Representatives and the White House announced a revised trade deal with Mexico and Canada. The deal would replace the North American Free Trade Agreement and would offer more provisions for U.S. workers.

ARAMCO DEBUTS: Saudi Arabia’s oil company Aramco gained 10% in its first moments on the stock market Wednesday in a dramatic debut that pushed its value to $1.88 trillion, surpassing Apple as the largest listed company in the world. Trading on the Saudi Tadawul stock exchange came after a mammoth $25.6 billion initial public offering that set the record as the biggest ever in history, overtaking the $25 billion raised by China’s Alibaba in 2014. Aramco, owned by the state, has sold a 1.5% stake in the company, pricing its shares before trading at 32 Saudi riyals, or $8.53. Shares closed at $9.39.

US Budget Deficit Rises to $209 Billion in November

Washington State OKs Some of the Nation’s Toughest OT Rules