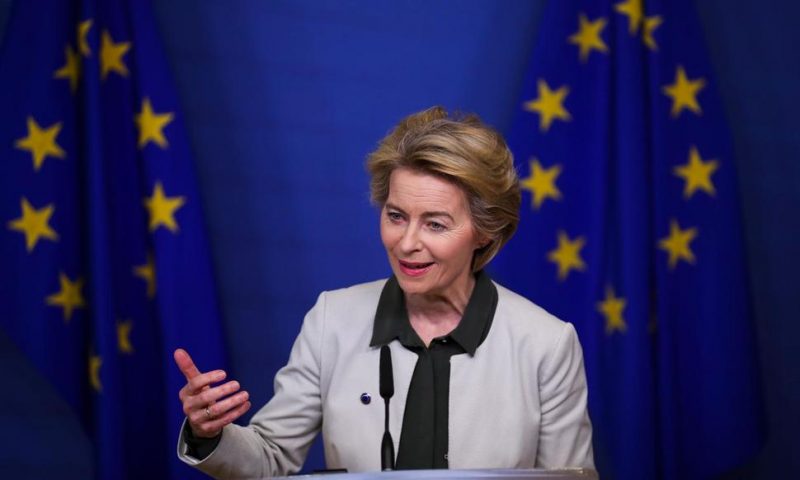 To get everyone on board with her plan to combat global warming, European Commission President Ursula von der Leyen wants to put up 100 billion euros ($130 billion) to help EU nations that still heavily rely on fossil fuels transition to lower emissions.

Von der Leyen, who took office this month at the helm of the European Union’s powerful executive arm, has made the fight against climate change the top priority of her five-year mandate. The first woman ever to lead the commission, she has pledged to make the EU the world’s first carbon-neutral continent by 2050 as part of the “European Green Deal” she presented Wednesday.

The commission hopes the fund will help EU nations that stand to be hit the hardest financially by the transition to cleaner industries. Among them, Hungary, the Czech Republic and Poland, which rely heavily on coal-fired power plants, have yet to commit to the EU’s goal of having net zero emissions of CO2 by 2050.

“The cost of the transition will be big, but the cost of non-action will be much bigger,” von der Leyen said, comparing her Green Deal to a “man on the moon moment.”

The net-zero emissions goal will be discussed Thursday during a meeting of EU heads of state and government in Brussels.

The new climate help fund, whose full details should be unveiled in January, might help convince leaders from those three countries to join that goal.

“I want us to agree on the commitment for the EU to become climate-neutral by 2050,” said Charles Michel, president of the EU Council, in a letter to EU leaders. “This would be a major signal from the European Council that the EU will take a global leadership role on this crucial issue.”

He said the transition to a lower-emissions economy will create opportunities for economic growth, but that the EU needs to recognize that the shift could be more disruptive for certain countries.

The plan will depend on various sources of funding, including private sector loans from the European Investment Bank, added to cash from the bloc’s long-term budget — which has yet to be approved.

Von der Leyen, who will present in March a European Climate Law, wants the 28-country bloc to reduce carbon emission by at least 50% by 2030 compared with 1990 levels, more than the current goal of 40%. If possible, she would like to increase the EU’s target for 2030 has high as 55% in a way that would not hurt the bloc’s economy.

According to the EU, between 1990 and 2018, greenhouse gas emissions in the bloc have already decreased by 23%, while the economy grew by 61%.

In total, Von der Leyen has pledged 1 trillion euros of investment over the next decade as part of her programme.

World leaders agreed four years ago in Paris to keep global warming below 2 degrees Celsius (3.6 Fahrenheit), ideally no more than 1.5 C (2.7 F) by the end of the century. Scientists say countries will miss both of those goals by a wide margin unless drastic steps are taken to begin cutting greenhouse gas emissions next year.

“All eyes are now upon the European Union and the EU Council meeting,” said Alden Meyer of the Union of Concerned Scientists. “We expect the EU’s national leaders will signal their intention to achieve net-zero emissions by 2050, at the latest. “

But climate policy experts urged the EU not to delay its decision on tougher emissions targets for 2030 until next October.

“Let us be clear, it’s essential for the EU to make such an announcement no later than the end of the first quarter of 2020,” said Meyer, who has observed climate negotiations for almost 30 years.

He explained that the joint statement reached between then-President Barack Obama and China in 2014 paved the way for the successful Paris climate agreement in 2015. With the EU and China set to hold a summit in September, Meyers says that Beijing needs time to ratchet up its own climate plans before that.

“The EU has to go first (on climate), because it has the responsibility and the capability,” said Meyer. “I think it will be difficult for China, India or others to enter into a discussion if the EU hasn’t put down this marker first. That’s why waiting till October is too late.”

Von der Leyen’s plan, which also intends to promote biodiversity, building renovation and sustainable mobility across the bloc, also recognizes the need to make respecting the Paris climate accord an essential condition of all future trade agreements concluded by the EU and international partners.

The new Commission also wants to reduce the use of pesticides, fertilizers and antibiotics in agriculture, and to introduce a “border carbon adjustment” aimed at inciting foreign greenhouse-gas emitters to become more environmentally friendly. It also wants to extend the emissions trading system to cover the maritime sector and to reduce the free carbon allowances allocated to airlines.

As ambitious as von der Leyen thinks her plan is, the environmental network Friends of the Earth Europe was less enthusiastic.

“We will be watching closely to see that every single decision the Commission now takes puts environment, climate and justice first,” Munic said.

Martin Kaiser, the managing director of Greenpeace Germany, said the Green Deal started a comprehensive process linking finance, economy and environment, “but it is too little too late, it’s up to the Council tomorrow to start with courage decisions on the carbon neutrality by 2040 and give it a clear direction for the Commission.”

Washington State OKs Some of the Nation’s Toughest OT Rules