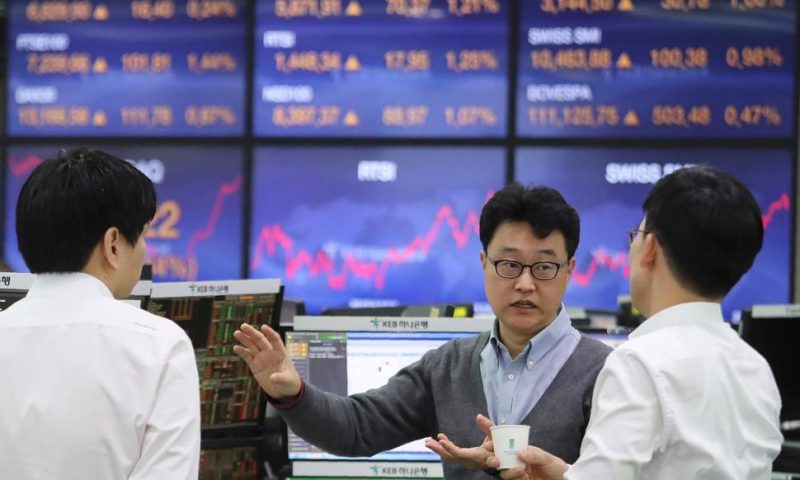 Shares in Europe and Wall Street futures are down on Monday after a day of gains in Asia.

Tokyo — Stock markets weakened during European trading on Monday as investors weighed the possibility of more U.S. tariffs on China and the outlook for negotiations on the trade dispute.

A Chinese official said that Beijing wants a prompt settlement of its trade war with Washington as another U.S. tariff hike on $160 billion of Chinese imports is due to take effect Sunday. China announced Friday it was carrying out a promise to waive punitive tariffs on American soybeans and pork.

U.S. shares were set to drift slightly lower with Dow and S&P 500 futures both falling less than 0.1%.

In Asia, Japan’s benchmark Nikkei 225 edged 0.3% higher to finish at 23,430.70, after the Cabinet Office reported the economy expanded at a 1.8% annual pace in July-September, spurred by strong consumer purchases ahead of an Oct. 1 sales tax hike. That was much stronger than the 0.2% growth earlier reported and marked a fourth straight quarter of expansion for the world’s No. 3 economy.

The week got off to a strong start after the Dow Jones Industrial Average jumped more than 300 points on Friday, while the S&P 500 erased losses from earlier in the week, nudging the benchmark index to a second consecutive weekly gain.

The Labor Department said employers added 266,000 positions, well above estimates of 184,000. The report also showed unemployment falling to a 50-year low. Separately, an index that measures how consumers feel about the economy showed an increase from last month.

In energy markets, the benchmark for crude oil lost 56 cents to $58.64 a barrel in electronic trading on the New York Mercantile Exchange. It advanced 77 cents to $59.20 per barrel on Friday. Brent crude oil, the international standard for pricing, shed 59 cents to $63.80.