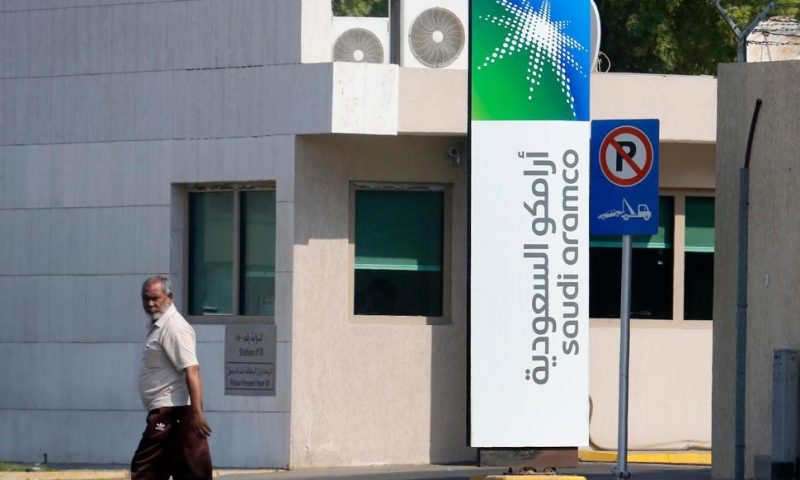 Saudi Arabia’s state-owned oil company Aramco is laying the groundwork for the biggest ever initial public offering of stock.

DUBAI, United Arab Emirates — Saudi Arabia’s state-owned oil company Aramco on Thursday set a share price for its IPO — expected to be the biggest ever — that puts the value of the company at $1.7 trillion, more than Apple or Microsoft.

The company said it will sell its shares at 32 riyals ($8.53) each, putting the overall value of the stake being sold at $25.6 billion. That surpasses IPO record holder Alibaba Group Holding Ltd, the Chinese conglomerate and e-commerce company that raised about $25 billion in 2014.

Aramco, which pumps and produces Saudi Arabia’s crude oil to the world, is floating a 1.5% stake in the company, or 3 billion shares. Trading is expected to happen on the Saudi Tadawul stock exchange by mid-December.

The company is selling a 0.5% stake to individual investors, who are Saudi citizens and residents of Saudi Arabia, and 1% to institutional investors, which can be sovereign wealth funds, asset managers and government-run pension programs.

Its financial advisers had said earlier that most orders were coming from Saudi funds or companies, with foreign investors— including from neighboring Gulf Arab states— accounting for only 10.5% of the bids. It was not immediately known what the final breakdown was.

The sale of a sliver of the oil behemoth generated global buzz since Crown Prince Mohammed bin Salman first announced plans for it more than two years ago.

The kingdom’s plan to sell part of the company is part of a wider economic overhaul aimed at raising new streams of revenue for the oil-dependent country. This as oil prices struggle to reach the $75 to $80 per barrel price range that analysts say is needed to balance Saudi Arabia’s budget. Brent crude is trading at just over $63 a barrel.

Prince Mohammed has said listing Aramco is one way for the kingdom to raise capital for the country’s sovereign wealth fund, which would then use that money to develop new cities and lucrative projects across Saudi Arabia.

Despite the mammoth figures involved in the IPO, they are not quite what the crown prince had envisioned based on his own remarks over the past two years. He’d previously talked about a valuation for Aramco of $2 trillion and a flotation of 5% of the company involving a listing on a foreign stock exchange. There are no immediate plans for an international listing.

Aramco said Thursday it would retain the option of an even bigger offering of a 3.45 billion share sale, representing $29.4 billion.

Despite Aramco’s profitability, the state’s control of the company carries a number of risks for investors. Two key Aramco processing sites were targeted by drones and missiles in September, an attack that was claimed by Iran-backed Houthi rebels in neighboring Yemen but which the U.S. blamed on Iran. Iran denies the allegation.

On Thursday, the countries that make up the OPEC oil-producing cartel — led by heavyweight Saudi Arabia— were meeting in Vienna to decide whether to cut down on their production and push up prices of fuel and energy around the world.