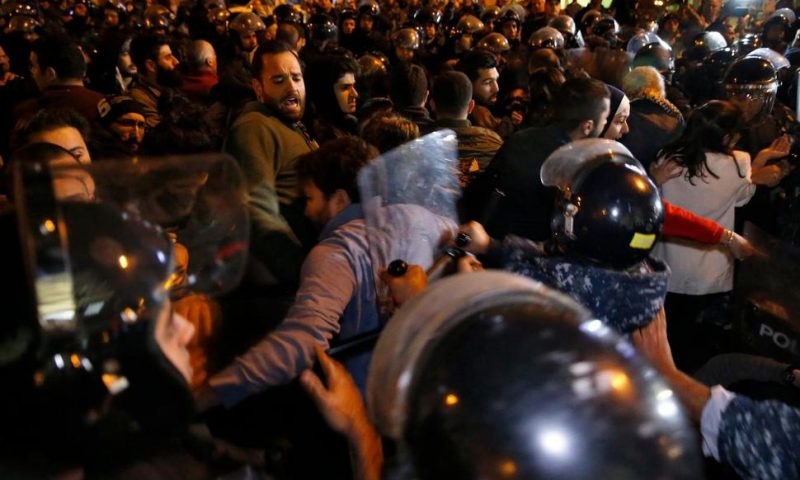 BEIRUT — Lebanon’s central bank on Wednesday dramatically lowered interest rates on dollar and Lebanese pound deposits and loans — the latest measure to shore up the country’s banking system amid a burgeoning economic crisis.

Banque de Liban also announced that for the next six months it would pay 50% of the interest it owes banks on dollar deposits and deposit certificates in Lebanese pounds— a move that would also ease the demand on the dollar.

The decisions come as Lebanon, the world’s third most indebted country in terms of debt-to-GDP ratio, faces an unprecedented economic and political crisis amid nearly 50 days of nationwide protests.

More than a month after the government resigned, President Michel Aoun announced Wednesday that he will hold formal consultations to name a new prime minister next week. He set Monday for the one-day meetings with parliamentary groups. But protesters have already began rallying against the potential candidate for the job, saying he is too close to the political elite they have been calling on to step down.

In a stark reflection of the deepening economic crisis, a man in his 40s shot himself to death Wednesday with a bird rifle when he became despondent over salary cuts in recent weeks, according to his family.

The father of 41-year-old Danny Abi Haidar said his son, who worked in a lighting company, spent the day Tuesday warding off creditors, trying to explain that he only received half his salary because of the economic crisis. Many private companies have resorted to reducing staff or slashing their pay to deal with rising inflation and liquidity crunch.

Adding to the burden, the son had been supporting his father, his mother and younger brother. The father had lost his job eight months ago and moved in with his older son.

On Tuesday, the local supermarket began demanding hundreds of dollars that Abi Haidar, a father of three, owed them.

Creditors “called him and he said I only got paid half my salary,” the father, Mohammed Abi Haidar, told The Associated Press. “He said I only have 200,000 liras (barely $100) to spend on my family.”

The father, distraught, said he holds senior officials and the protests responsible for his son’s death.

“I hold those senior officials responsible; the revolution and everyone, I hold them responsible,” Abi Haidar said.

“How many more suicides do you want?” read one placard raised by a protester. Marwa Saad, a protester who was among hundreds at a rally that blocked a major Beirut intersection, said government officials are wasting time and fail to sense the depth of the public misery.

“They are blind and deaf while we burn and kill ourselves. They still don’t feel a thing,” she said, raising a Lebanese flag. The protesters light candles along the road they blocked. Security forces deployed but didn’t forcefully open the road.

The protesters say Samir Khatib, named as a possible prime minister and a prominent contractor, is close to the political elite they have been protesting since Oct. 17.

Hundreds of protesters blocked in towns in the Bekaa valley in the east on Wednesday in rallies against Khatib. Lebanon’s armed forces said it arrested 16 protesters following scuffles to break up road blocks.

To alleviate the pressure on the banks amid a liquidity crunch and rising risk of defaulting, Lebanon’s central bank said it has put a ceiling on interest rates, slashing them on dollar deposits and loans to 5% from as high as 14%.

The central bank’s decision applies to new deposits and ones renewed after Wednesday. Interest rates on Lebanese pound-denominated deposits would be set at 8.5%.

Depositors have rushed to withdraw their money after banks reopened following a two-week shut-down at the start of the protests.

Lebanese officials estimate that as much as $4 billion have been withdrawn from banks over the past weeks as the local currency loses nearly 40% of its value. The money remains in the country but reflects the deepening confidence crisis banks are facing.

Local banks also imposed capital control measures unseen before in the country known for its free-market economy, such as limiting withdrawals and transfers of money abroad.

The central bank’s decisions buy time until a new government is formed. International donors had pledged $11 billion to Lebanon’s troubled economy in 2018, long before the protests began. But the donors had called for major economic changes to release the loans and grants.

Hariri resigned Oct. 29 amid nationwide protests, saying he reached a “dead end” with his political rivals over an emergency government. The protesters have been calling for a technocrat government, accusing the current political elite of widespread corruption and mismanagement of the country’s economy. Hariri has expressed support for Khatib as a potential successor.