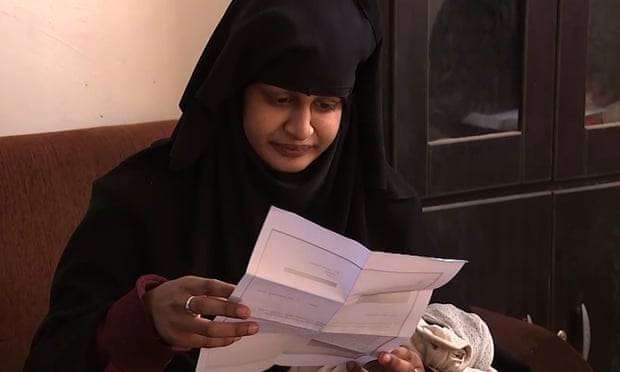 The head of the international Red Cross has sharply criticised Britain’s policy of stripping the citizenship of people held in Syria after the fall of Islamic State, saying it is “not conducive” to long-term peace in the region.

Peter Maurer said the UK and other western countries also needed to consider repatriating children held with their mothers in Syria’s overcrowded refugee camps – at a time when the UK Home Office has said no more returns of British minors are in the pipeline.

Maurer, the president of the International Committee of the Red Cross (ICRC), told the Guardian that he “failed to see” how denying people such as 19-year-old Shamima Begum their nationality would help a crisis made more complex by the recent Turkish invasion.

“There are things which are probably not conducive to a solution and I fail to see at the present moment how stripping citizenship and making people stateless or just pushing or betting on a second nationality which should deal with the issue brings more clarity,” he said.

The UK has repeatedly stripped citizenship from people who travelled over to join Isis where it believes they have a valid second nationality, although Begum – who left east London when she was 15 – has challenged such a decision in the British courts, arguing that she has in fact been rendered stateless.

The invasion of the border areas of Kurdish-dominated north-east Syria in October has led to further population displacement as locals have fled Turkey’s army, estimated by Maurer at “definitely more than 100,000 and probably closer to 200 [thousand]”, and further complicated the region’s humanitarian crisis.

The ICRC had been able to maintain access to al-Hawl, the largest refugee camp in north-east Syria, but said its access to camps and Isis prisons on the frontline had become more difficult. “We haven’t now revisited prisons now under the control of Turkish armed forces,” Maurer added.

But he warned that countries such as the UK that tried to ignore their citizens in the region unfairly increased the burden on Syria and neighbouring Iraq: “They have even more difficulties in terms of infrastructure, security, environment, and therefore we have to start somewhere.”

The ICRC estimated that there were roughly 10,000 to 15,000 families in the refugee camps from 60 to 70 countries, populations that were “overwhelmingly kids, some of them are accompanied by their mothers and some of them are orphans”.

Britain has been largely unwilling to take back children caught up in the conflict, arguing they pose a security risk, although last week the Foreign Office repatriated a small number of orphans for the first time following a special diplomatic mission.

A day later, however, the Home Office said the case was considered highly exceptional and it had no repatriations of children with a parent present in Syria in the pipeline. Save the Children has estimated that about 60 British children remain in the region.

“We are here not to forget about key humanitarian problems,” Maurer said, and added that he wanted to engage “with those governments who are sceptical about taking back their nationals to take a medium- to long-term view”, which he hoped might facilitate returns, particularly of mothers with children.

Isis fighters who needed to be put on trial should either be brought back and put on trial in their home countries, he added, or an arrangement should be struck with local authorities to bring them to courts there. “We do have a final opinion that you can’t detain and retain people without a basic process of law,” Maurer added.

About 60 British men and women remain in prisons or refugee camps in the region. One, Jack Letts, who left the UK to fight for Isis, has remained in detention since 2017 and had his British citizenship stripped, leaving him with the Canadian nationality of his father, while waiting for his situation to be resolved.