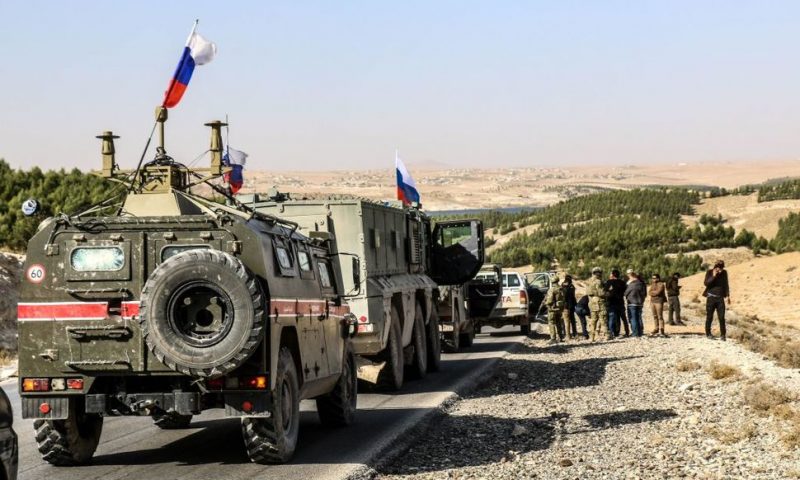 Following the shakeup from the sudden U.S. retreat, major powers in northeast Syria have bolstered their forces and converged on a strategically critical area.

RUSSIA HAS CHOSEN TO establish a new military base in a part of Syria perilously close to an area that American troops have been charged with defending, heightening the risk of a confrontation from either an unintentional skirmish or a deliberate provocation.

Analysts believe the potential for new fighting in northeast Syria is particularly high as Russia seeks to test the resolve of the U.S. and its allies following President Donald Trump’s hasty decision to withdraw from the region last month.

“This is a new phase that the U.S. hasn’t dealt with before,” says John Dunford, a research assistant at the Institute for the Study of War, which tracks the movement of forces in the region. “As we move into a new phase of war, northeast Syria becomes more and more compacted with different forces.”

U.S. troops, under orders from the president to secure oil fields in northeast Syria, last week reportedly began patrolling near the strategically important Syrian town of Qamishli adjacent to the Turkish border, which essentially serves as a gateway into the region.

That area is also home to a new Russian air base established in coordination with Turkey since the U.S. withdrawal, seemingly in an attempt to exert military control of the region. Moscow has touted in recent days that it has used the base for what it calls humanitarian missions to help locals return to their homes but also as a key military hub for its air force to protect new patrols it has deployed. Those troops operate in coordination with forces loyal to the regime of Bashar Assad, at numbers unseen since the start of the conflict.

“The smallest form of miscalculation or incident could lead to an escalation that could threaten U.S. forces patrolling in this area,” Dunford says.

The sudden influx and convergence of opposing forces in a confined region would be damaging enough for American interests. But Russia’s increased air forces and electronic warfare capabilities also threaten to erode the technological dominance that U.S. forces have maintained there in recent years.

According to ISW, the U.S. has conducted patrols at Qamishli as recently as last week and previously had a permanent base there before Trump’s sudden directive in early October to withdraw. The president has since revised his orders, saying he wants the U.S. to remain in northeast Syria to “keep the oil,” a mission the Pentagon has interpreted as protecting valuable resources from falling into the hands of the Islamic State group, also known as ISIS.

The U.S. headquarters overseeing operations in Syria and Iraq declined to say if American forces were operating in that specific area but confirmed a continuing U.S. presence in parts of northeast Syria. A spokesman said the U.S. “will continue to de-conflict military operations with the other forces in the area, to keep all troops safe and avoid miscalculation.”

The headquarters, known formally as Combined Joint Task Force – Operation Inherent Resolve, indicated Thursday that the new Russian presence does not affect operations for its forces or its allies.

“Our mission in Syria has not changed, and is still focused on ensuring the lasting defeat of Daesh,” spokesman Army Col. Myles Caggins says in a statement, using a derogatory local acronym for the Islamic State group.

The U.S. continues to work through local allies, a Kurdish-Arab coalition known as the Syrian Democratic Forces or SDF, with the principal goal of eliminating the Islamic State group’s access to resources and territory in the region, Caggins says. And he adds that the coalition believes it is currently positioned to avoid confrontation with the Russians or any other foreign power operating in Syria.

“All coalition military operations are de-conflicted with other forces operating in the region, through pre-existing channels and interlocutors in order to reduce the risk of interference, miscalculation, or unintended escalation of military operations,” Caggins says.

The threats to the U.S., however, are not limited to a confrontation with Russian forces. The undersized and vulnerable American presence in the region relies on the support of its local partners, an arrangement that has come under particular strain following Trump’s sudden decisions. And analysts now fear the White House decision to retreat has undermined the trust that local forces placed in their U.S. backers.

The potential shift in allegiance was evident Monday, when Russian forces operating near the city of Kobani faced angry mobs that threw stones and Molotov cocktails at their patrol – a scene similar to, though more violent than, the sudden U.S. pullout. Forces that had previously partnered with the U.S. issued an apology for the locals’ behavior afterward.

“The subjection of the Russian patrol to this incident is regrettable, and we will take the appropriate action in order not to repeat such incidents,” a group identifying itself as the Internal Security Forces said in a statement Tuesday, according to local news outlet Hawar. “We are convinced that the Russian forces deployed in the city of Kobani and the border strip, in accordance with the Sochi Agreement, are a guarantee to bring stability and security in the region.”

A top Kurdish commander told CBS News that he, too, felt that the sudden U.S. withdrawal forced him to turn to the Russian military for support.

Retired Army Gen. Joseph Votel, who until his retirement earlier this year served as the top officer for conflicts in the Middle East, warned last month of the threat that Russia and the Syrian regime pose to U.S. allies following Trump’s decision to withdraw.

“It’s still unclear what sort of punishment the Assad regime will impose on the SDF for partnering with the U.S., and whether any such repercussions will affect the SDF’s ability to maintain the camps and detention facilities and continue pressuring ISIS,” he wrote in The Atlantic. “To ensure the success of the SDF and whatever elements of the regime end up managing this problem, the U.S.-led coalition against ISIS may need to open a limited window of rapprochement with the Syrian regime or the Russians, who will surely use the detention issue as leverage against the West.”