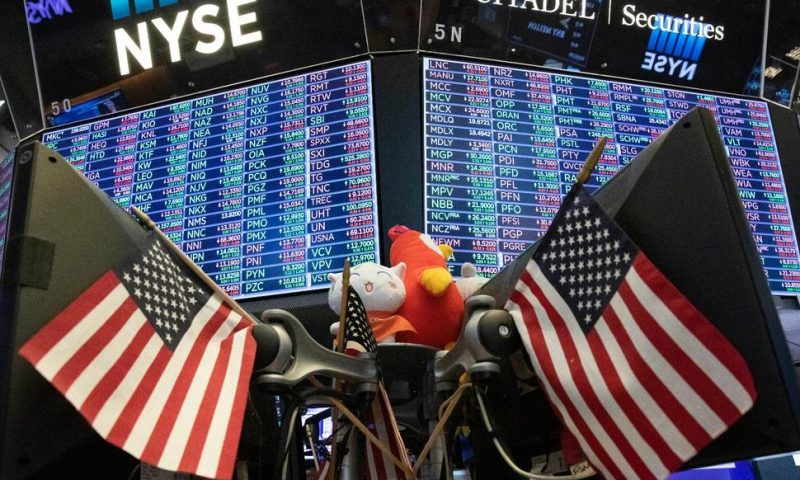 U.S. stocks shook off a midday stumble to finish slightly higher Friday, though the modest rebound was not enough to keep the S&P 500 from breaking its longest stretch of weekly gains in two years.

U.S. stocks shook off a midday stumble to finish slightly higher Friday, though the modest rebound was not enough to keep the S&P 500 from breaking its longest stretch of weekly gains in two years.

Banks, health care stocks and companies that rely on consumer spending powered much of the rebound, outweighing losses in technology, real estate and other sectors. Oil prices fell.

Markets around the world churned this week on uncertainty about whether the U.S. and China can soon halt their trade dispute, or at least stop it from escalating. New U.S. tariffs are set to hit Dec. 15 on many Chinese-made items on holiday shopping checklists, such as smartphones and laptops.

Tariffs already put in place have hurt manufacturing around the world, and businesses have held back on spending given all the uncertainty about where the rules of global trade will end up.

President Donald Trump said a deal between the world’s largest economies is “potentially very close” after Chinese President Xi Jinping said Beijing is working to “try not to have a trade war,” but will nevertheless fight back if necessary.

Even with the run of selling this week, major indexes remained close to the all-time highs they set during steady, six-week upward move. The benchmark S&P 500 ended the week within 0.4% of its record high set on Monday.

“Investors are basically saying the market is overbought and they’ll wait to step back in after we see some sort of resetting of prices,” said Sam Stovall, chief investment strategist at CFRA.

Despite the mostly down week, the major U.S. stock indexes are on track for strong gains this year. The S&P 500 and Nasdaq are up by more than 24%, while the Dow is up nearly 20%.

Hopes that Washington and Beijing can make progress on a trade deal helped spur the market higher since late October, along with surprisingly good corporate earnings, solid economic data and interest-rate cuts by the Federal Reserve.

Stocks receded from those highs this week as investors grew more doubtful about the prospects of a trade deal. Doubts have persisted despite some encouraging remarks from the presidents of both nations.

Trump said “we have a very good chance to make a deal” in an interview with Fox News after reports through the week raised the possibility that a “Phase 1” agreement may not be in place until 2020.

In Beijing, Xi earlier told a visiting U.S. business delegation, “We want to work for a Phase 1 agreement on the basis of mutual respect and equality.”

Investors have heard such remarks before throughout the long-running trade war, however.

“There have been too many times that the president has tweeted or he has had some of his underlings mention that a trade deal is imminent only to have nothing happen or to have the threat of postponement,” Stovall said.

Traders sized up another batch of corporate earnings from retailers Friday.

Nordstrom surged 10.6% after the retailer said it made a bigger profit last quarter than Wall Street expected.

It was a bright spot for the retail sector after a long list of mall-based clothing retailers delivered weak third-quarter earnings reports. Macy’s cut its profit and sales forecast for the year as shoppers continue to head online instead of to the store. The department store climbed 5.2% Friday, though it still ended down more than 8% for the week.

Nearly 96% of companies in the S&P 500 have now told investors how much profit they made during the summer, and they’re on pace to report a drop of 2.3% from a year earlier. That’s not as bad as the 4% drop that analysts were earlier expecting.

Tesla skidded 6.1% after some analysts panned the unveiling of its electric pickup truck. It’s aiming at the most profitable part of the North American market, but investors are skeptical about how many traditional pickup drivers the blocky, angular looks of Tesla’s “Cybertruck” will draw.

In a First, IBM’s Computer Debater Faces off Against Itself