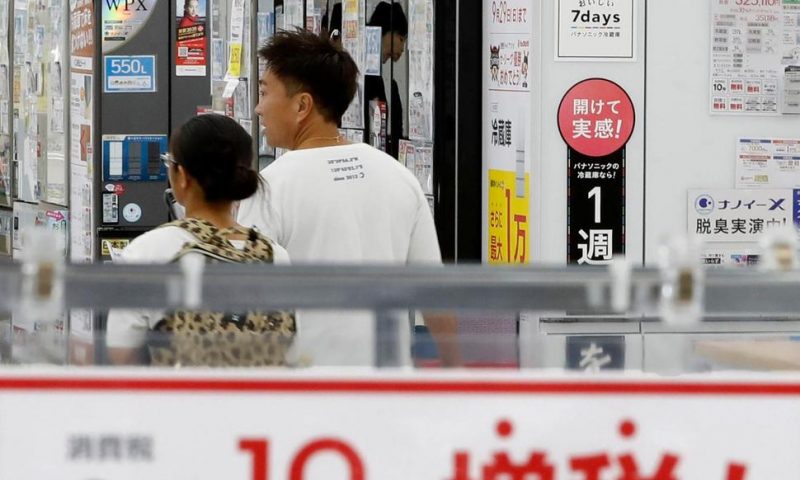 Japan economy grows at 0.2% pace in July-September, supported by consumer purchases ahead of a tax hike.

TOKYO — JAPAN’S economy grew at a modest annual pace of 0.2% in July-September, supported by consumer purchases ahead of a tax hike, the government said Thursday.

It was the fourth straight quarter of expansion for the world’s third largest economy, but well below analysts’ forecasts.

Trade tensions between China and the U.S. and between Japan and South Korea have weighed on export demand that already was weakened by slowing global growth.

An increase in the national sales tax to 10% from 8% as of Oct. 1 is expected to drag growth lower in the last quarter of this year.

Past tax hikes have been followed by recessions, but economists say the modest bump in spending ahead of this latest increase suggests that spending and growth may not fall by as much this time around, said Stefan Angrick of Oxford Economics.

However, he said, “we caution against overly optimistic expectations for household spending after the tax hike as wages remain weak. The external outlook also remains vulnerable.”

In 2020, the economy is expected to get a small lift from the Tokyo Olympics and Paralympics, noted Naoya Oshikubo of Sumitomo Mitsui Trust Asset Management.

He said corporate investments would likely also rise thanks to the need for equipment to help make up for shortages of labor.

US Budget Deficit Surges to $134.5 Billion in October

California Crisis of Fires, Blackouts Decades in the Making