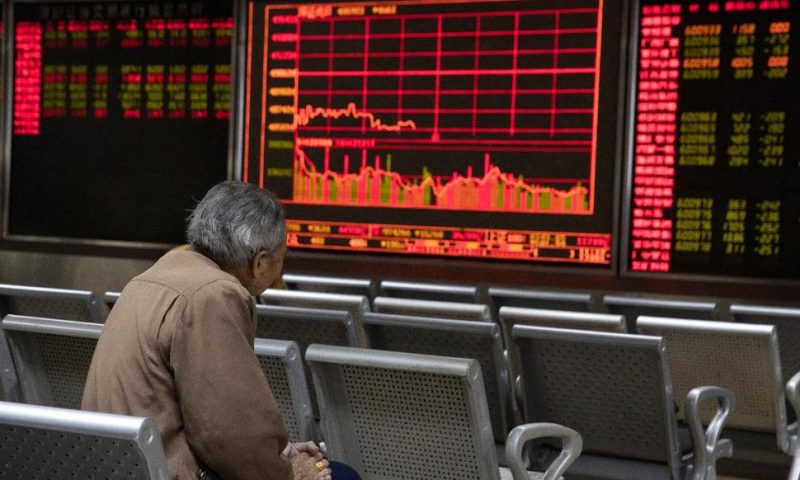 World stock markets are up as investors await news on progress in negotiations on the trade dispute between China and the United States.

BANGKOK — World stock markets rose Tuesday as investor awaited news on progress in negotiations on the trade dispute between China and the United States.

An update could come later in the day, when U.S. President Donald Trump is scheduled to give a speech on trade and economic policy at the Economic Club of New York.

Markets were rattled Monday after Trump cast doubts over a Chinese official’s comments on gradually rolling back tariffs as negotiations progress.

Both sides agreed last month to hold off on further tariff increases as they thrash out a “Phase 1” agreement that the U.S. says is meant to settle basic issues before moving on to more complex disagreements.

The status of the talks remains murky.

But the Dow Jones Industrial Average managed a slight gain anyway on Monday, hitting another record as it closed at 27,691.49.

In Asia, Hong Kong shares bounced back from a sell-off the day before, though protesters again disrupted the morning commute on Tuesday. The benchmark Hang Seng index added 0.4% to 27,040.21.

The semi-autonomous Chinese city has been wracked by anti-government protests for more than five months.

Tensions escalated Monday as violence grew more extreme when a police officer drew his gun during a struggle with protesters, shooting one in the abdomen. In another neighborhood, a person was set on fire after an apparent argument. The Hong Kong hospital authority said both were in critical condition. Video of another incident showed a policeman on a motorcycle riding through a group of protesters in an apparent attempt to disperse them.

In comments suggesting harsher legal and police measures may be planned, Hong Kong’s leader Carrie Lam pledged to “spare no effort” to halt the protests.

Looking ahead, on Wednesday the Federal Reserve’s chairman, Jerome Powell, is due to give testimony to Congress about the U.S. economy. Most investors expect the Fed to keep interest rates on hold for now after cutting them three times since the summer.

Later this week, the U.S. Labor Department will also give updates on inflation at both the consumer and wholesale levels. On Friday, economists expect a government report to show that retail sales returned to growth in October. That would suggest robust consumer spending is helping to compensate for weaker manufacturing due to the trade war.

Earnings season is close to complete, and nearly 90% of the companies in the S&P 500 have reported their profits for the July-through-September quarter, according to FactSet. Results have been weak due in part to the slowing global economy, with earnings per share down 2.4% from a year earlier, not as bad as analysts had forecast.

Benchmark crude oil rose 26 cents to $57.12 per barrel in electronic trading on the New York Mercantile Exchange. It lost 38 cents on Monday. Brent crude oil, the international standard, added 30 cents to $62.48. It fell 33 cents the day before.