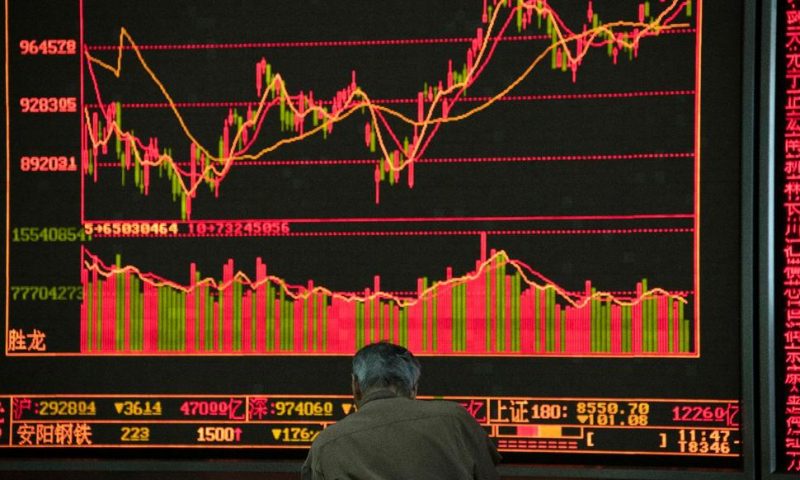 BANGKOK — Shares were mostly higher in Asia on Tuesday after the Dow Jones Industrial Average notched another record high.

Investors were awaiting developments on the China-U.S. trade front after President Donald Trump cast doubts over a Chinese official’s comments on gradually rolling back tariffs as negotiations progress.

The next hints on the status of talks between Beijing and Washington over their tariff war may come later in the day, when Trump is scheduled to give a speech on trade and economic policy at the Economic Club of New York.

The city has been wracked by anti-government protests for more than five months and tensions escalated Monday as violence grew more extreme.

After a police officer drew his gun during a struggle with protesters, shooting one in the abdomen. In another neighborhood, a person was set on fire after an apparent argument. The Hong Kong hospital authority said both were in critical condition. Video of another incident showed a policeman on a motorcycle riding through a group of protesters in an apparent attempt to disperse them.

In comments suggesting harsher legal and police measures may be planned, Hong Kong’s leader Carrie Lam pledged to “spare no effort” to halt the protests.

Overnight, U.S. stocks mostly fell after President Donald Trump said over the weekend that reports about U.S. willingness to lift tariffs were “incorrect,” only two days after a Chinese official said both sides agreed to rollbacks if talks progress.

Stocks dropped as soon as trading began Monday, and the S&P 500 lost as much as 0.6% from its record level, though indexes pared their losses as the day progressed.

The Dow Jones Industrial Average was an outlier and eked out another record, rising less than 0.1% to 27,691.49.

A major factor in the advance was Boeing, whose shares soared 4.5% after the aircraft maker said it hopes to resume deliveries of its 737 Max jet next month.

Bond markets were closed in observance of Veterans Day.

Low interest rates have helped drive the stock market’s recent rally. On Wednesday, Fed Chairman Jerome Powell is due to give testimony to Congress about the economy. Most investors expect the Fed to keep interest rates on hold for now after cutting them three times since the summer.

Later this week, the Labor Department will also give updates on inflation at both the consumer and wholesale levels. On Friday, economists expect a government report to show that retail sales returned to growth in October. That would suggest robust consumer spending is helping to compensate for weaker manufacturing due to the trade war.

Earnings season is close to complete, and nearly 90% of the companies in the S&P 500 have reported their profits for the July-through-September quarter, according to FactSet. Results have been weak due in part to the slowing global economy, with earnings per share down 2.4% from a year earlier, not as bad as analysts had forecast.

Veterans Can Get Business Help From Govt, Private Sector