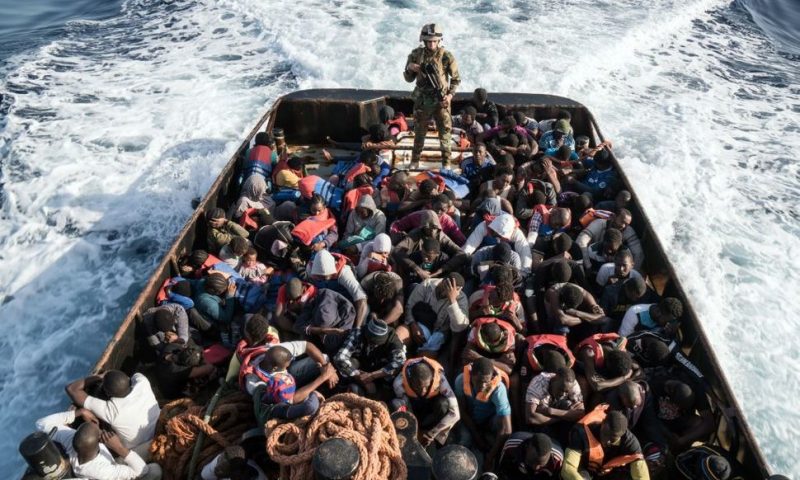 RUSSIAN PRESIDENT Vladimir Putin suggested to the West last month that the widening chaos in Libya after almost a decade of war should have been obvious: “A flow of migrants went through Libya to Europe,” he said in an interview, recalling the displacement of refugees that has reached crisis levels in recent years. “They have what they were warned about.”

This week, The New York Times documented the deployment into Libya of Russian mercenaries. While Moscow denies its involvement, the situation mirrors tactics it has successfully employed in Syria and Ukraine to gain influence in chaotic war zones by dispatching private forces Putin can disavow until the point of victory.

[ SEE: Political Cartoons on World Leaders ]
The Russian leader’s warning about Libya, many analysts believe, reflects an ambition to intervene in the conflict at least in part to control refugee flows into Europe, indicating a broad understanding of the disruptive power that the movement of immigrants has had on the Western world.

“Russia’s efforts to manipulate refugee flows is aimed at destabilizing and politically weakening the European Union,” says Agnia Grigas, a non-resident fellow at the Atlantic Council. “Libya’s proximity to Europe just across the Mediterranean is likely to unleash another refugee catastrophe.”

The possibility of another mass migration is feared in Europe, after popular protests that swept across the Arab world beginning in 2011 sparked the greatest migrant wave since World War II. More than 1 million migrants fled, generating political, social and cultural upheaval in countries from Hungary and Austria to Germany and northwestern Europe over how – and whether – to integrate them. The crisis strained the NATO alliance and provoked domestic distrust in governments across the continent. Demonstrations in some places turned violent, right-wing nationalist movements spread, and the debate over refugees is thought to be at least partially responsible for the decision by the United Kingdom to divorce itself from the European Union.

Now Putin’s government seems to believe it can continue to exploit such vulnerabilities from a new direction.

Libya, sometimes referred to as the “gateway” to Europe, has served as the jumping-off point for migrants escaping from as far as Senegal on Africa’s west coast and Somalia on its east to those fleeing war-ravaged Syria. Refugees often made the journey by sea, assisted by smugglers whose operations are targeted by the country’s coast guard. Italy and the European Union provide training, funds and equipment to assist in the effort under agreements with Libya’s U.N.-backed government, and the crisis has largely tapered. But the status of those agreements – and Libya’s willingness to enforce restrictions on migration – would be uncertain if the government fell.

Since a U.N.-approved NATO intervention that toppled leader Moammar Gadhafi in 2011, warring militias and foreign fighters have vied for control of the sprawling, oil-rich nation. While the United States has remained mostly quiet on the ongoing conflict, the internationally recognized government in Tripoli is now under threat from forces led by Khalifa Haftar, a Libyan-American citizen who has received support from Egypt and France – and more recently from Russia.

“The failures of U.S. policies in Libya and Libya’s proximity to Europe makes the country an effective target for Russia,” Grigas says.

The effect of Moscow’s latest influence in Libya would first target Italy, still considered among the most influential foreign powers for affairs within the North African state. But those concerns would not stay in Rome.

“It’s a point of leverage that Moscow could use in its overall effort to break the EU and NATO, and compel cooperation or acquiescence on areas that are higher priority to the Kremlin: Eastern Europe,” says Emily Estelle, research manager with the American Enterprise Institute’s Critical Threats Project.

A State Department spokesperson speaking on the condition of anonymity says the U.S. is concerned about reports describing the deployment to Libya of Russian mercenaries, specifically from an organization known as the Wagner Group with close ties to Putin. Russia’s use of what the government calls “hybrid warfare” – akin to its prior covert and deniable operations in Syria and Ukraine – increases the potential for mass Libyan and Russian casualties, the spokesperson says, as well as increasing the number of displaced people.

“Russia is following a familiar script, fueling conflict and cynically seeking to buy support by providing arms and military assistance, often using private military contractors, such as the Wagner Group, as proxies,” the spokesperson says. “The Kremlin mistakenly believes using proxies provides plausible deniability, but nobody is fooled.”

A spokeswoman for U.S. Africa Command, the military headquarters overseeing operations on the continent, declined to comment about Russia’s intervention and the potential threats it poses.

Libya serves as only the latest example of a strategy Russia has employed with increasing success in recent years.

President Donald Trump’s sudden and seemingly impromptu decision to withdraw U.S. fighting forces from Syria effectively granted victory to Russia, which deployed troops to the chaotic war zone in 2015 to prop up its patron regime under Bashar Assad. Moscow’s tenure in Syria was marked by accusations it had “weaponized” streams of refugees and otherwise displaced people seeking shelter in neighboring countries such as Jordan, Lebanon and particularly Turkey, which straddles the European border.

Syria wasn’t the first time Putin demonstrated what appeared to be a willingness to mobilize refugees as tools of intimidation. In 2015, in the wake of international outcry over Moscow’s invasion and annexation of parts of Ukraine the year before, Russia inexplicably began opening normally well-guarded border crossings to Finland and Norway. The move allowed thousands of refugees, including those fleeing unrest in Central Asia, to spill over into Western nations.

The move prompted alarm, first in Helsinki and Oslo, and later among top U.S. defense officials. As the secretary of the Air Force told U.S. News at the time following a trip to the region, “Everybody is worried about Russia.”

Some American and European analysts who spoke with U.S. News dispute whether Russia intervened in Libya as a way to control migrant flows, also casting doubt on claims it has done so elsewhere. Their skepticism matches apprehension by many aid workers at the prospect of viewing displaced people as a weapon of war – a reluctance that others say makes the strategy that much more effective.

Any ability to influence migrant flows in Libya likely would not happen immediately. The most prolific ports from which migrants have departed remain under the control of the U.N.-backed Government of National Accord in Libya.

That reality could change quickly for Russia, particularly as it has stepped up its military support for Haftar’s forces with this latest deployment despite perhaps greater influence thus far from other backers.

“Russia certainly would be in an enviable position, were Haftar able to achieve a military or political victory,” says Nathan Vest, a research assistant at the Rand Corporation.

Putin is only the latest world leader to appear to involve himself in the ongoing conflict in Libya. Since the beginning of Haftar’s campaign to forcibly seize control of the country from which he was exiled after defecting to the U.S., other powers have intervened in support of him. In addition to Egypt and France, the United Arab Emirates reportedly has provided sophisticated Chinese drones in support of Haftar’s forces.

But these other nations appear to have focused on issues other than immigration.

“Russia’s interests and strategy in Libya has more to do with filling the holes left by the U.S. and extending control over the Mediterranean Sea,” says Oded Berkowitz, an Israeli intelligence analyst and deputy chief intelligence officer with the MAX consultancy. Mass migration is among the knock-on effects Russia considers as a part of its intervention, which it primarily focuses on projecting military strength and security military and trade routes. “I’m not sure if it’s a primary objective or just a helpful byproduct.”

The principal benefit for Russia in Libya is that other European countries must now take its interests into account in seeking a solution regarding the migrant flows from North African shores, says Jonas Kjellen, a military analyst with the non-governmental Swedish Defence Research Agency.

“Libya is not very different from Russia’s role in Syria,” Kjellen says. “Russia has to be consulted, involved or coordinated with.”