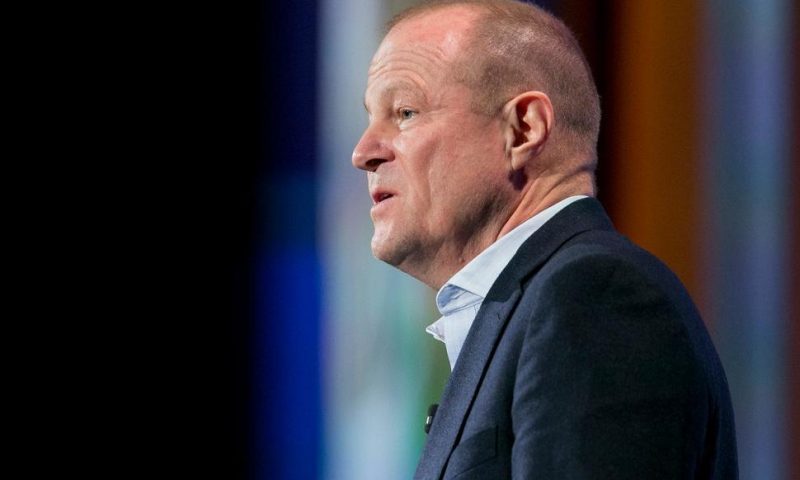 Gap says CEO Art Peck is stepping down as the company continues to grapple with slumping sales.

NEW YORK — Gap announced Thursday that CEO Art Peck is stepping down as the company struggles to turn around a long-standing sales slump.

The San Francisco-based retailer also lowered its earnings outlook for the year as sales at the Gap, Banana Republic and Old Navy fell in the most recent quarter.

The company’s stock tumbled 7% to $16.75 in after-hours trading following the announcement. The shares were trading at around $41 when Peck took the CEO spot in early 2015.

Effective immediately, Robert J. Fisher, Gap’s non-executive chairman of the board, will serve as president and CEO on an interim basis. Fisher is the son of Gap’s co-founders Donald and Doris F. Fisher.

“As the board evaluates potential successors, our focus will be on strong leadership candidates with operational excellence to drive greater efficiency, speed and profitability,” he said in a statement.

The news comes as the company is splitting into two publicly traded companies, one for its Old Navy brand and another for the Gap, Banana Republic and its lesser known brands like Athleta, Intermix and Hill City.

Like many mall-based clothing chains, Gap is struggling to turn itself around as shoppers go online or to discounters like T.J. Maxx for their clothing. But Gap, which defined casual dressing in the 1990s, has also long struggled with its own deep-rooted problems — its offerings have failed to stand out from that of its rivals.

Peck had been promising investors that a turnaround is in the making. But instead, the chain has struggled with sales declines, and has had to keep discounting its merchandise to get customers into its stores.

The company expects adjusted earnings per share for the fiscal third quarter to be about 50 cents to 52 cents. Analysts had been forecasting 55 cents per share, according to FactSet.

For the current fiscal year, Gap expects adjusted earnings per share to be in the range of $1.70 to $1.75 compared to previous guidance of $2.05 to $2.15. Analysts had expected $2.06 per share for the year, according to FactSet.

In addition, the company’s board appointed Bobby Martin, chair of its compensation and management development committee, as lead independent director.

“This was a challenging quarter, as macro impacts and slower traffic further pressured results that have been hampered by product and operating challenges across key brands,” said Teri List-Stoll, executive vice president and chief financial officer, Gap Inc. in a statement.

Gap is slated to release its fiscal third quarter results on Nov. 21.

Bank of England Warns Over Global Economic Hit to UK