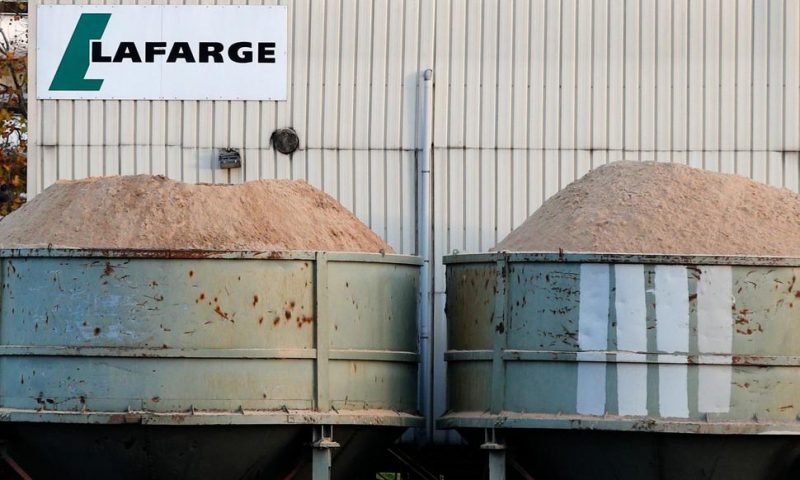 A French court has quashed charges of “complicity in crimes against humanity” pressed against French cement company Lafarge, but says other charges will be considered over payments made to Syrian armed forces.

PARIS — A French court on Thursday quashed charges of “complicity in crimes against humanity” pressed against French cement company Lafarge, but says other charges will be considered over payments made to armed forces in Syria.

The other charges that the Paris appeal court maintained against the company include financing a terrorist enterprise, violation of an embargo and endangering others.

Lafarge has acknowledged funneling money to Syrian armed organizations in 2013 and 2014 — allegedly including the Islamic State group — to guarantee safe passage for employees and to supply its plant in the war-torn country.

Eight officials with Lafarge were also handed charges for their alleged roles in the process.

Christophe Ingrain, a lawyer for Lafarge, welcomed the ruling, saying the court “acknowledged that Lafarge did not take part in any complicity of crime against humanity.”

Ingrain said Lafarge denies being involved in violations related to the remaining charges.

The same court ruled last month in favor of Lafarge’s request that several NGOs that had filed legal complaints against the company could no longer be considered plaintiffs in the case.

Claire Tixeire, senior legal adviser for the Berlin-based European Center for Constitutional and Human Rights, one of the former plaintiffs, said the ruling was part of the “ups and downs” in a legal case: “It takes time.”

Tixeire noted it is the first time in France that a company is indicted for activities that took place abroad.

Marie-Laure Guislain, head of litigation for the French association Sherpa, also a former plaintiff in this case, said the continuation of the legal proceedings is “an important step forward in the fight against impunity of multinational companies.”

“This means that in a globalized world, when a parent company benefits from its global strategy, it should answer for the grave violations that stem from its activities abroad”, she said.

The probe was opened in October 2016 after the French Ministry of Economy and Finance filed a complaint against the group.

Since then, LafargeHolcim has said it commissioned an independent investigation that revealed that the local company provided funds to third parties to work out deals with a number of armed groups.

The company acknowledged “unacceptable individual errors” were made in Syria until its facilities in the country was evacuated in September 2014.

Italy Presses Steelmaker to Agree Deal on Plant, Save Jobs