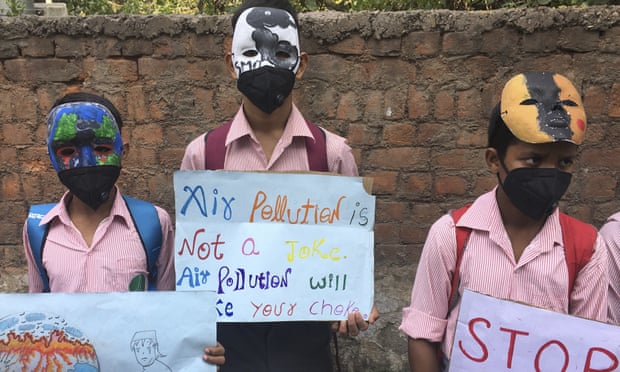 The illegal burning of crop stubble by farmers in India, one of the biggest causes of the record-breaking pollution that has enveloped Delhi over the past week, is expected to continue for the next two weeks, despite a supreme court order for all farm fires to be halted.

Delhi has been experiencing its longest spell of hazardous air quality since public records began, with the city suffering from “severe” levels of pollution for nine days straight, prompting a public health emergency to be declared.

On Sunday, the city’s worst day for pollution in three years, air quality monitors registered the concentration of toxic particles in the air at 50 times the level recommended by the World Health Organization.

Much of the blame for the worsening problem has been laid at the door of farmers in Delhi’s neighbouring regions of Punjab and Haryana, who, despite laws banning the practice, continue to set fire to their fields to clear excess crops. The dust and fumes from the fires are blown over to Delhi, where they engulf the city. According to Safar, the Indian government air quality regulator, 46% of Delhi’s pollution this week was caused by stubble burning.

On Monday, Punjab registered 5,953 farm fires in a single day, the highest number so far this year, which, according to satellite data collected by the Punjab Agriculture University, brings the total number of farm fires this season to 31,267.

Authorities in Haryana meanwhile registered 4,288 cases of stubble burning this year so far.

After a petition was submitted by environmental activists, India’s supreme court on Monday ordered a complete halt to the practice of stubble burning and reprimanded authorities in Punjab and Haryana for allowing the illegal practice to continue under their watch.

“People are dying, this just cannot happen in a civilised country,” said the court judges in a statement, warning that the entire administrative and police hierarchy, all the way down to local officers, would be held responsible if the practice continued.

But the chief ministers of Haryana and Punjab have each blamed the other for the polluting fires. On Twitter, Haryana chief minister, Manohar Lal Khattar, posted a satellite image purportedly showing less crop burning cases in his state than in Punjab.

However, with the burning season only just beginning, the fires are expected to continue for at least the next two weeks as farmers clear their fields ready to plant new crops.

Poverty stricken farmers have complained of being scapegoated for the pollution problem. The machinery to manually clear the fields is expensive and so for many, burning the excess crops is the only affordable approach so they are likely to ignore the court’s ruling. However, the Punjab government said they would step up efforts in the next few days to tackle the fires.

As well as cracking down on farmers, within Delhi itself measures have been introduced to try and lessen the pollution. Construction was halted, firecrackers have been banned and on Monday, a two-week trial scheme was introduced that ruled cars with odd and even numbers plates had to drive on alternate days.

Delhi’s chief minister, Arvind Kejriwal, who said this week that the city had become a “gas chamber”, hailed the first day of the scheme as a success, saying it had taken 1.5m cars off the roads and reduced congestion.