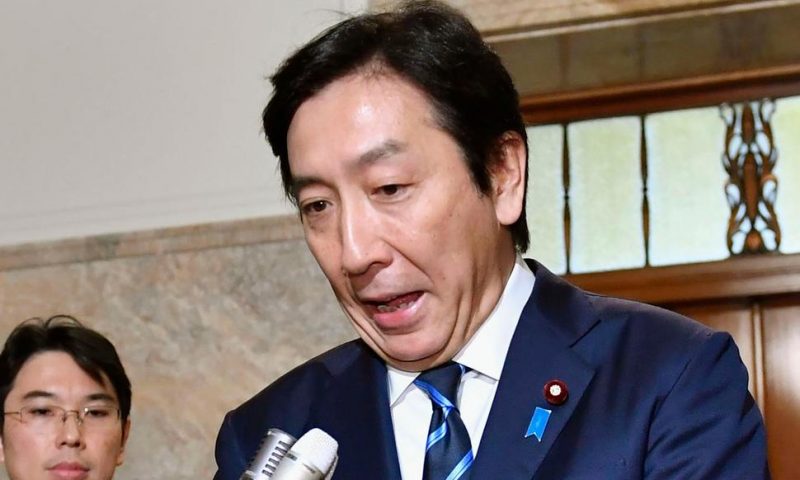 Japan’s trade minister has resigned a month into his job in a scandal over condolence money, expensive melons and other gifts allegedly offered to election supporters.

TOKYO — Japan’s trade minister resigned Friday a month into his job in a scandal over condolence money, expensive melons and other gifts allegedly offered to election supporters.

Prime Minister Shinzo Abe was quick to remove Isshu Sugawara to limit the potential damage to his Cabinet. He accepted the offer to resign and replaced Sugawara with Hiroshi Kajiyama, formerly the minister in charge of local revitalization and regulatory reform.

“I bear responsibility for his appointment and I apologize to the people for causing a situation like this,” Abe told reporters. But he said he had to move on because “not even a second of standstill or delay is allowed” in the important policy area.

Sugawara, 57, tendered his resignation just before he was to face questions from opposition lawmakers about the vote buying allegations later Friday, a day after more tabloid reports about his scandal came out.

Sugawara said he did not want to hold up important discussions in Parliament. The scheduled committee meeting Friday was canceled.

His resignation comes just weeks after Abe added him to the Cabinet in a reshuffling prompted by the July election, in which his ruling coalition secured a comfortable majority.

Sugawara has been grilled in Parliament recently after a magazine reported earlier that he had paid condolence money and sent expensive melons, crab and other gifts to his election district supporters in 2006-2007. Such payments are considered donations that are against Japanese elections law.

Another magazine article Thursday provided more details of alleged giveaways in his election district of Nerima in Tokyo, which apparently triggered his decision to offer his resignation.

Opposition lawmakers said they will not let him off the hook without explanation.

“He had to step down because he cannot provide a clear explanation. Now he is even more suspect,” said Tetsuro Fukuyama, secretary general of the opposition Constitutional Democratic Party of Japan. Another opposition lawmaker, Yuichiro Tamaki, head of the Democratic Party of the People, also demanded Sugawara’s accountability.

“It’s about his alleged violation of the law. He cannot just get away with quitting the Cabinet,” Tamaki said.

Sugawara denied paying cash to voters but has flip-flopped on other details when asked about the gifts delivered to his supporters in the Nerima district.

Sugawara said he regretted he had to step down in the middle of his term and leave work unfinished. He acknowledged the condolence money was presented to supporters by his aide, and that he will fully investigate and clarify the situation.

Abe took office in December 2012 and is set to be the longest serving prime minister in Japanese postwar history next month. He has managed to shake off various scandals, partly because of an opposition that is divided and unpopular.

Sugawara’s gift-giving scandal also comes at a time his ministry’s oversight was in question over a separate money-for-favors scandal at the power utility Kansai Electric Power Co., whose chairman resigned recently after acknowledging that 20 of the company executives accepted cash and lavish gifts from a former official of a town hosting the utility’s nuclear plant.