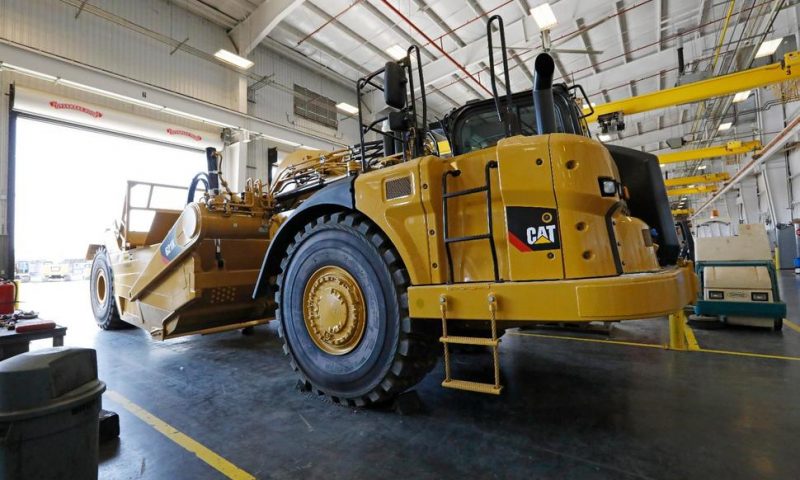 Squeeze is on at Caterpillar, which cut its outlook for the year after dealers slashed inventories.

NEW YORK — A slowing global economy is taking a toll on Caterpillar, which cut its outlook for the year Wednesday after profits and revenue slid in the third quarter.

Hinting at a pull-back in spending by builders, dealers slashed inventories by about $400 million. That’s a $1.2 billion swing from last year’s third quarter, when dealers increased inventories by $800 million. Caterpillar’s revenue and sales declined about 6%.

The heavy equipment maker was hit hardest in Asia, where lower demand in China fueled a nearly 30% decline in sales.

Caterpillar is somewhat insulated by the impact of rising tariffs because they make many of their products where they sell them so goods don’t have to cross borders before they are sold. However, China’s economic growth sank to a new multi-decade low in the latest quarter, as a trade war with the U.S. has deepened a slump there. Growth slipped to 6% in the three months ending in September, the weakest level since China started reporting data by quarters in 1993.

U.S. construction hasn’t been immune and sales to that sector account for the largest slice of business for Caterpillar. Weak spending in August marked the fourth consecutive month of malaise in the U.S., dragged down by continued weakness in nonresidential building.

Also, U.S. factory activity hit a decade low last month in the face of President Donald Trump’s trade conflicts. The Institute for Supply Management’s manufacturing index shrank for a second straight month, to 47.8% in September, down from 49.1% in August. Any reading below 50 signals that the sector is contracting.

Net income was $1.49 billion, or $2.66 per share, well short of the $2.90 that Wall Street was looking for, according to industry analysts surveyed by FactSet. It’s also weaker than the $1.72 billion the company earned in the same period last year.

The weakness in Asia was somewhat offset by a 3% sales growth in North America and a 12% increase in Latin America.

Stocks Eke Out Gains After a Mixed Set of Earnings Reports