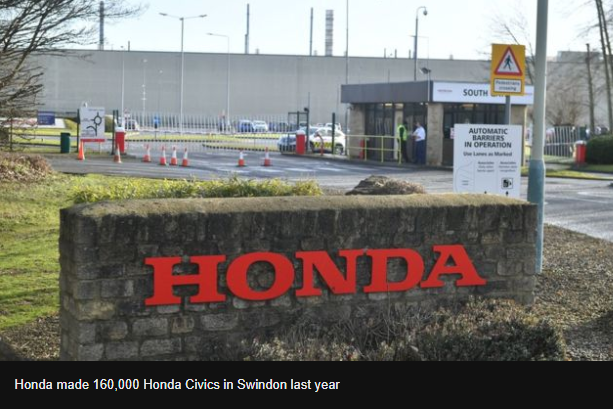 In February the company said it would close the factory by 2021 with the loss of 3,500 jobs, and earlier this week Honda Logistics said it too would shut.

The group was set up to support workers and those in Honda’s supply chain, as well as plan a future for the site.

The Department of Business, Energy and Industrial Strategy said it was doing everything it could to support workers.

It said the “work of local leaders and the taskforce has made it clear that Swindon is a key place to invest”.

Labour’s parliamentary candidate for South Swindon Sarah Church said: “In less than two years this site will be closed. It will be a really significant hit to our local economy. This should be the highest priority for local politicians.

“I’m aware they are distracted by Brexit, but this is locally huge and the fact they haven’t met since June doesn’t instil any confidence they have a plan to tackle this problem.”

Battery plant
The taskforce brought together political and business leaders but has not met since the then business secretary, Greg Clark, was replaced by Andrea Leadsom in reshuffle following Boris Johnson’s election as Conservative leader and prime minister.

Employment-based options for the future use of the site have been considered and Swindon Borough Council has insisted the land should not be used for housing.

Honda of the UK Manufacturing Ltd, which still owns the site, said: “Discussions around potential investment are confidential, and we would not therefore comment on the content or outcome.”

Last month Labour announced at its party conference it would fund a battery production plant on the vast South Marston site.

The borough council has said as the land is owned by Honda, it would be up to the firm who it sold it to.

Honda has not wanted to comment about it openly but said it was talking to local and national government about the options.

South Swindon Conservative MP, Robert Buckland, said there were plenty of options on the table once Honda decided what it wanted to do with its site.

“Whether that’s through an Enterprise Zone or securing the site in terms of purchase, we’ll find a way to help lever really high quality investment to make sure the jobs of the future attract high wages and high skills,” he said.