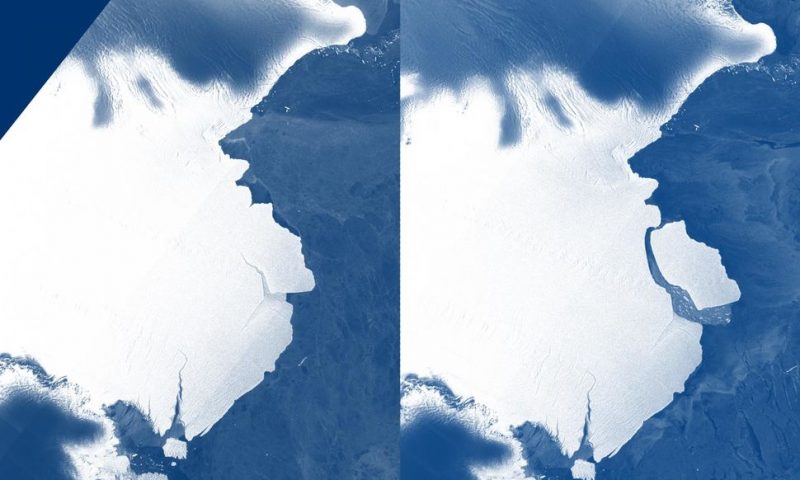 The iceberg, which weighs 315 billion tons, is the largest chunk of ice to break off the Amery Ice Shelf in more than 50 years.

The largest chunk of ice in more than 50 years has broken off the Amery Ice Shelf in Antarctica.

The new iceberg, which broke off last week, weighs 315 billion tons. Officially named D-28, the iceberg is more than 630 square miles in area and nearly 690 feet thick. For comparison, the area of Los Angeles is just over 500 square miles.

Given its large size, researchers will track the iceberg’s movement to make sure it isn’t a threat to shipping industries.

Researchers have been monitoring the site for nearly 20 years and knew this event was coming.

“I am excited to see this calving event after all these years,” Helen Fricker of the Scripps Institution of Oceanography said in a statement. “We knew it would happen eventually, but just to keep us all on our toes, it is not exactly where we expected it to be.”

Researchers had their eyes on an area east of the section that appeared to be loose but is still intact.

Scientists say this is part of the shelf’s normal “calving,” or breaking, cycle, so they do not think climate change played a role in the event. Despite large surface melts in the summer, the Amery Ice Shelf is doing relatively well compared to its surroundings.

“While there is much to be concerned about in Antarctica, there is no cause for alarm yet for this particular ice shelf,” Fricker told BBC News.

Recent research found that sea ice levels in the Antarctic are at their lowest in 40 years.

The calving event will not affect sea level rise, according to Ben Galton-Fenzi of the Australian Antarctic Program.

“The calving will not directly affect sea level because the ice shelf was already floating, much like an ice cube in a glass of water,” Galton-Fenzi said in a statement. “But what will be interesting to see is how the loss of this ice will influence the ocean melting under the remaining ice shelf and the speed at which the ice flows off the continent.”